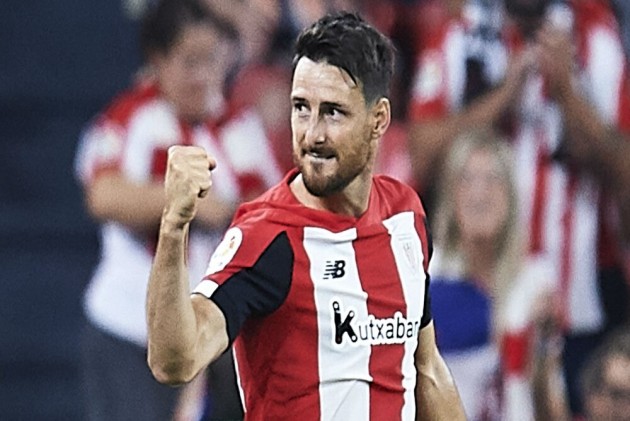 Aduriz was given a special send-off by Athletic on the hallowed San Mames turf last week after the 39-year-old retired – the coronavirus pandemic and a hip injury prematurely ending the forward's career.

Retiring at the end of 2019-20 had always been the plan for Aduriz, who netted 118 league goals for Athletic across three different periods and was the only player other than Lionel Messi to score in 15 successive LaLiga seasons after his stunning last-gasp bicycle kick against Barcelona in August.

Aduriz – a late bloomer – also enjoyed spells with Real Valladolid, Real Mallorca and Valencia, while he made his Spain debut in 2010 before earning an international recall six years later at the age of 35.

"After the first seasons at Athletic, he went to Mallorca and in Mallorca he scored many, many goals. At Valencia, the same. But when he came to Bilbao at 31-32 years of age, he started scoring goals like a crazy man.

"Very good football level and in six years, it was amazing. Everything he touched was gold. The secret? I don't know. He is a very professional man, he ate very clean."

Susaeta played alongside Aduriz – who did not move to San Mames until he was already 19 – as Athletic stunned Spanish giants Barca in the 2015 Supercopa de Espana, the club's first piece of silverware in 31 years.

Aduriz scored a second-half hat-trick in Athletic's 4-0 first-leg rout of Barca before they earned a 1-1 draw at Camp Nou.

"I remember that final," Susaeta, who now plays for A-League side Melbourne City, said. "One of the most important moments of my football career. Amazing night because winning against Barcelona is very difficult if you play two games.

"At San Mames, we won 4-0 and it was an amazing night. Aduriz scored three goals and the other one was [Mikel] San Jose. In the second game at Camp Nou, we drew 1-1 and Aduriz again scored.

"The last trophy Athletic won was maybe 30 years ago and this trophy was very special for supporters, the players."

Having already decided to hang up his boots at the end of the campaign, Aduriz looked set for a fairytale farewell after Athletic earned a blockbuster Copa del Rey final showdown against Basque rivals Real Sociedad, however, the COVID-19 crisis has left the decider up in the air since March.

"For this pandemic, coronavirus, it is a very crazy moment for the world and football," Susaeta added. "The pain for him is very strong now and he couldn't play that final. But if Athletic win that final, Aduriz is like the other players. It's his trophy also."

While Susaeta and Aduriz flourished together on the field, it is their friendship outside of football that the 32-year-old winger cherishes most.

"I have many memories," Susaeta said. "I am a privileged man because I've given him the most assists during his career. Always when we played together, we played good, very good years.

"But for me, it's more important that we have very good memories outside of the pitch, outside football. We are very good friends. We usually go on holidays, for dinner with the families."

With Aduriz now in retirement, all eyes are on Inaki Williams – who signed a new nine-year contract in August – to lead Athletic into a new era.

Asked if Williams is the man to take Athletic forward, Susaeta replied: "Yes, because in the past he played very good football. Now he is the present.