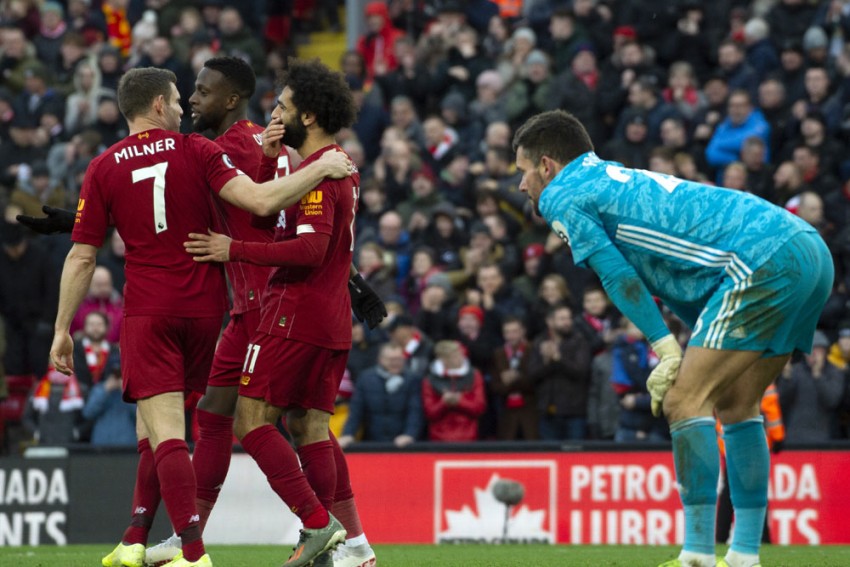 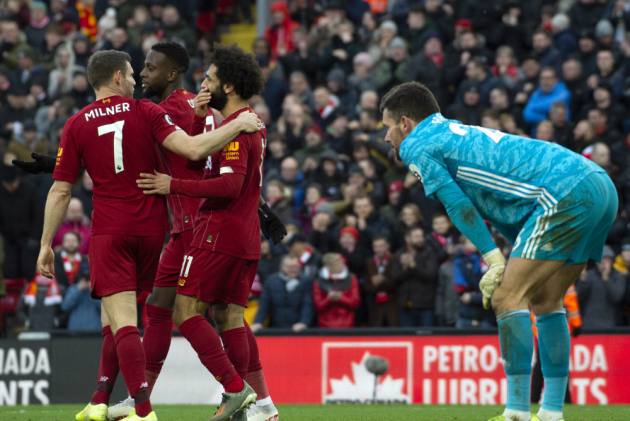 Liverpool made hard work of beating rock-bottom Watford 2-0 in the Premier League on Saturday and also suffered another injury blow as Georginio Wijnaldum limped off ahead his side's Club World Cup trip. (More Football News)

A day on from manager Jurgen Klopp signing a contract extension to 2024, the runaway leaders were well below their brilliant best but nevertheless claimed victory through two goals from Mohamed Salah, the second coming in the 90th minute.

Abdoulaye Doucoure and Ismaila Sarr were guilty of horrible misses for Watford either side of Salah's first strike seven minutes before half-time and there were several other presentable chances for Watford in their first game under Nigel Pearson.

However, Liverpool - who also had a goal ruled out by VAR - ultimately did enough to claim victory and will now hope for a positive update on Wijnaldum as they prepare for a Club World Cup semi-final on Wednesday.

Liverpool's previous three home games against Watford had yielded an aggregate score of 16-1, but this was certainly no cakewalk.

Despite having less than 30 per cent possession in the first period, Watford regularly threatened on the counter-attack, enjoying success down the flanks.

However, both Doucoure and Sarr mis-kicked horribly when given clear sights of goal in the Liverpool box and the first of those misses was punished inside 58 seconds as the hosts scored from their only shot on target prior to half-time.

An incisive Liverpool break ended with Salah latching on to Sadio Mane's pass into the left channel, before cutting inside Kiko Femenia all too easily and curling a gorgeous finish beyond Ben Foster into the top right-hand corner.

Watford continued to look dangerous after the break and Alisson was forced into stops from Sarr and Gerard Deulofeu either side of Mane seeing a 50th-minute goal ruled out for offside following a VAR review.

A lack of quality in the final third was prevalent thereafter, with Roberto Firmino particularly sloppy, but Liverpool – now 11 points clear at the top of the table ahead of Leicester City's clash with Norwich City - eventually added a second as Salah flicked home a scuffed shot from substitute Divock Origi.

What does it mean? Ugly win no problem amid hectic schedule

Liverpool may not have been particularly impressive, but Klopp is unlikely to mind one bit. December is an intense month for the league leaders and securing another win - their 16th from 17 league games - was essentially all that matters.

So much of Watford's best play came down the flanks, with Deulofeu particularly influential. The tricky winger should have crowned an impressive performance with a second-half goal, but failed to beat Alisson after being put through one-on-one.

Sarr has a shocker

If Doucoure's spurned chance was clumsy, the midfielder failing to make clean contact when unmarked by the penalty spot, Sarr's subsequent mis-kick was a real shocker. Alisson palmed a Deulofeu cross straight into the winger's path, but Sarr almost missed the ball completely having had time to settle himself. The effort summed up Sarr's general lack of quality in the final third as he wasted a host of promising opportunities.

- Liverpool are unbeaten in 34 Premier League games (W29 D5), the third-longest run in the history of the competition after Arsenal (49) between May 2003-October 2004 and Chelsea (40) between October 2004-October 2005.
- Watford’s Nigel Pearson became the ninth different manager to face Liverpool at Anfield in their first Premier League game in charge of a team – with all nine losing to the Reds by an aggregate score of 3-19.
- Watford have won just nine points from 17 games this season – each of the nine previous teams to accumulate nine points or fewer after 17 Premier League matches were eventually relegated.
- Liverpool have won their last 16 home top-flight matches – they’ve only had one longer run at Anfield in their history, winning 21 in a row between January and December 1972.
- Liverpool manager Jurgen Klopp has won seven Premier League games against Watford; against no side has he picked up more victories in the competition (level with Crystal Palace).
- Salah has now scored 84 goals in 126 appearances in all competitions for Liverpool – two more than Luis Suarez (82) netted in 133 games for the Reds.
- Salah has scored eight Premier League goals against Watford; more than he has netted against any other team in the big five European leagues.
- Mane has had a hand in nine goals in six Premier League appearances against Watford for Liverpool, scoring five and assisting four.

Liverpool's senior squad now head to the Club World Cup in Qatar as their youngsters face Aston Villa in the EFL Cup. The Reds' next Premier League meeting is a tantalising Boxing Day clash at second-placed Leicester, while Watford host Manchester United next Sunday.