Raheem Sterling was on target as Manchester City beat Aston Villa, while Brighton and Hove Albion left it late to see off Everton 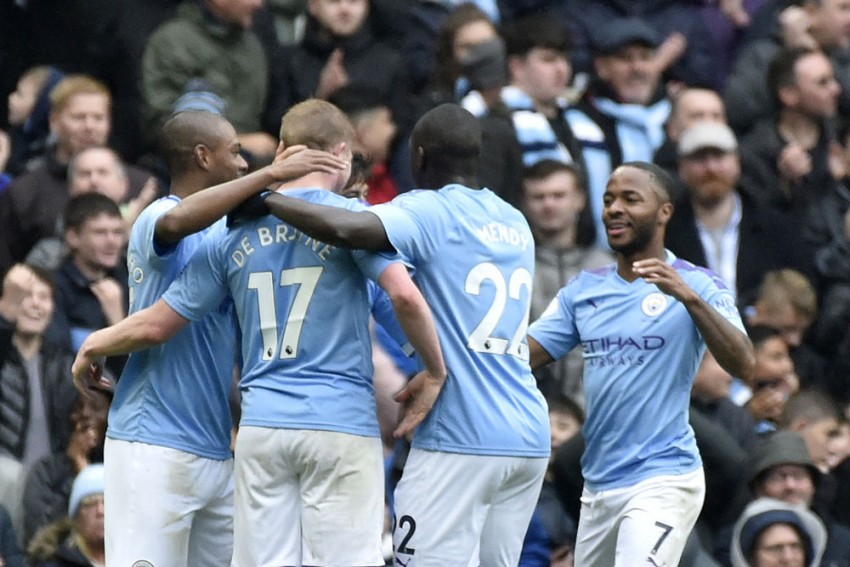 A superb second-half display helped Manchester City to a comprehensive 3-0 win over Aston Villa in the Premier League on Saturday.

Raheem Sterling, David Silva and Ilkay Gundogan were all on target after the break as Pep Guardiola's side closed the gap to leaders Liverpool to three points ahead of their game with Tottenham on Sunday.

A stoppage-time own goal by Lucas Digne condemned Everton to a 3-2 defeat at Brighton and Hove Albion and Sheffield United came from behind to secure a 1-1 draw at West Ham.

Meanwhile, Watford and Bournemouth played out a 0-0 draw at Vicarage Road.

A big W to start the weekend!

The England forward followed his midweek hat-trick against Atalanta with another strike as City cruised past Villa at the Etihad Stadium.

Sterling latched onto Gabriel Jesus' headed flick-on before squeezing a low effort underneath Tom Heaton to open the scoring just 20 seconds into the second period.

That was followed in the 65th minute by David Silva's strike, the Spaniard's deft touch from Kevin De Bruyne's whipped cross given the green light after a lengthy VAR review.

Ilkay Gundogan then added a third 20 minutes from time, the German sending a fine half-volley past Heaton, before Fernandinho spoiled a fine performance with a second yellow card in the 87th minute.

Everton remain in trouble near the foot of the table after Digne's own goal four minutes into stoppage time handed Brighton a 3-2 win at the Amex Stadium.

Pascal Gross had put the hosts ahead with a thunderous free-kick after 15 minutes but an own goal from Adam Webster pulled the Toffees level five minutes later.

Everton looked on course for their first away win of the season when Dominic Calvert-Lewin stroked home with 16 minutes remaining.

However, Neal Maupay levelled from the spot in the 80th minute after VAR adjudged Michael Keane to have fouled Aaron Connolly inside the penalty area, with Everton's misery completed by Digne's unfortunate intervention late on.

What a contrast to last Saturday - and THAT is why we all love this game - boy did we enjoy that, get in there!

MOUSSET THE DIFFERENCE AGAIN FOR BLADES

West Ham had taken the lead shortly before the interval when Robert Snodgrass fired low past Dean Henderson for his first Premier League goal of the campaign.

Mousset – who scored the winner against Arsenal on Monday – had the final say, though, finishing past Hammers goalkeeper Roberto Jimenez just six minutes after coming off the substitutes' bench.

Watford, meanwhile, remain rooted to the bottom of the Premier League after they were held to a goalless draw at home by Bournemouth.

3 goals in his last 5 games