With a 106-run win over Bangladesh, England registered their second win of the ICC Cricket World Cup 2019, following the 14-run loss to Pakistan in the second match. They had beaten South Africa by 104 runs in the World Cup opener 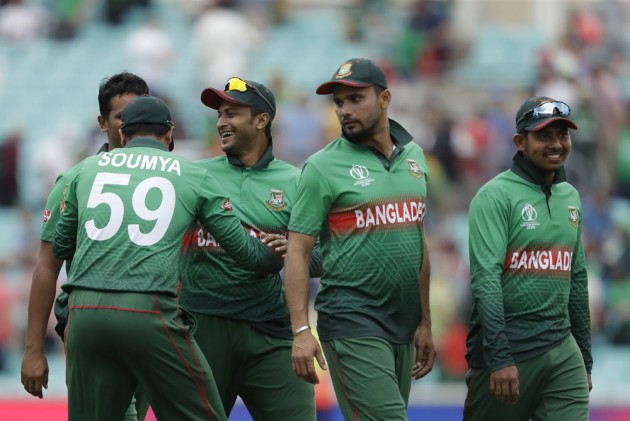 Opener Jason Roy smashed his way to a sensational 153 as England scripted a dominating performance to hammer Bangladesh by 106 runs in a high-scoring ICC Cricket World Cup 2019 at Sophia Gardens, Cardiff on Saturday.

Sent into bat, England posted a massive 386 for six and then returned to dismiss Bangladesh for 280 in 48.5 overs, despite a superb hundred by all-rounder Shakib Al Hasan (121).

England thus registered their second win of the showpiece event, following the 14-run loss to Pakistan in the second match. They had beaten South Africa by 104 runs in the World Cup opener.

Roy, who blasted five sixes and had 14 hits to the fence in his 121-ball innings, laid the foundation of the big score with two crucial partnerships -- 128 with opener Jonny Bairstow (51) and 77 with first-down Joe Root (21).

Jos Buttler then scored a 44-ball 64 laced with four sixes and two fours and added 95 runs with skipper Eoin Morgan (35) as England posted the first 350 plus total of the tournament.

It was also England's best World Cup total, surpassing the 338 for 8 against India in the 2011 edition.

Chasing an improbable 387 to win, Shakib added 106 runs with Mushfiqur Rahim (44) after Bangladesh were reduced to 63 for two in 12 overs.

Shakib took Bangladesh across the 200-mark in 37th over but the Tigers never really looked in the chase and once he departed in the 40th over, it was a mere formality thereafter for the hosts.

The victory will help to exorcise the ghost of 2015 World Cup when England were knockout out by Bangladesh after beating them by 15 runs.

Earlier, England were off to a flying start as Roy and Bairstow scored 67 in the first powerplay and then brought up the hundred in 15 overs.

A superb catch by Mehidy Hasan at short cover finally ended Bairstow's innings as Bangladesh produced a much-needed breakthrough in the 20th over bowled by skipper Mashrafe Mortaza.

Roy continued in the same vein and completed his century in the 27th over with a pull shot which crossed the boundary line after a misfield. However, the opener, anticipating it to be a single, ended up knocking umpire Joel Wilson to the ground while running to the non-striker. Both were unhurt.

Roy and Root then continued to dominate the proceedings as the hosts crossed 200 runs in 30.4 overs.

However, England lost their second wicket when Root played on in the 32nd over.
In the 35th over, Roy plundered three successive sixes off Mehidy Hasan to complete his 150 in 120 balls but he was holed out by Mortaza at extra cover in the next ball.

Buttler and Morgan then carried the onus with the former blasting two sixes and a four off Mosaddek Hossain. The pair took England across the 300-mark in 43rd over.

However, the duo perished in the 46th and 47th over respectively, while Ben Stokes (6) too was out cheaply.

Liam Plunkett (27) and Chris Woakes (18) then provided some lusty blows, sharing 45 off just 17 balls to take England close to the 400-mark.

At the toss, Mortaza said: We will bowl first. This pitch has been undercover for the last two days. We liked to but we are sticking with the same team. Last match was disappointing but hopefully, we will bounce back. We have to play at our best to beat this England team.

Morgan said: I don't think this is a bad toss to lose considering the amount of grass that has come off this wicket. We had a bad day against Pakistan. We played some good cricket against South Africa and hopefully we will play good cricket too.

Pitch report by Michael Holding and Sourav Ganguly: It looks bright and sunny. It is a little bit green but not as much as you would think. There won't be a lot of lateral movement off those grassy areas.