England will have to play against Montenegro without Raheem Sterling, after it was decided he will not be considered for selection 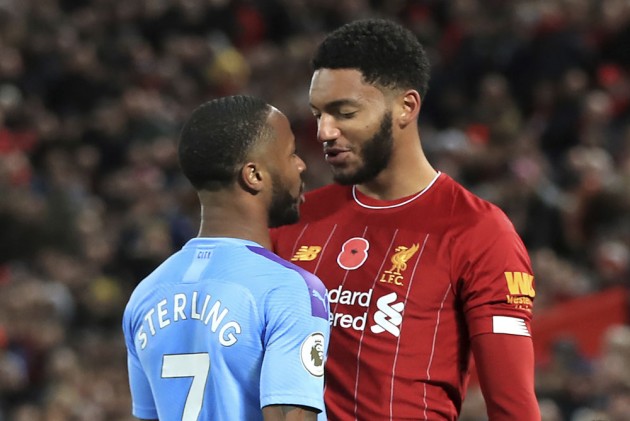 Raheem Sterling will not be considered for England's Euro 2020 qualifier against Montenegro following a reported bus- up between the Manchester City forward and Liverpool defender Joe Gomez. (More Football News)

Sterling and Gomez are said to have been involved in a physical confrontation at England's St George's Park training base.

The incident is thought to have been sparked after a back-and-forth about Liverpool's 3-1 Premier League win over City at Anfield went too far.

It is reported England team-mates had to separate the pair, who clashed late in Sunday's fixture that left Liverpool eight points clear at the top.

Sterling will remain with England, who need just a point to be sure of guaranteeing qualification, but a Football Association statement confirmed he will not take part against Montenegro.

"The FA can confirm Raheem Sterling will not be considered for Thursday's EURO 2020 qualifier against Montenegro at Wembley as a result of a disturbance in a private team area at St. George's Park today. He will remain with the squad," the statement read.

Three Lions manager Gareth Southgate added: "We have taken the decision to not consider Raheem for the match against Montenegro on Thursday.

We can confirm that @sterling7 will not be considered for Thursday's #EURO2020 qualifier: https://t.co/dsVfgitdSm

"One of the great challenges and strengths for us is that we've been able to separate club rivalries from the national team. Unfortunately, the emotions of yesterday's game were still raw.

"My feeling is that the right thing for the team is the action we have taken.

"Now that the decision has been made with the agreement of the entire squad, it's important that we support the players and focus on Thursday night."

Sterling has been in impressive form for England during their qualifying campaign, scoring eight goals and providing five assists.

The 24-year-old put in a strong showing against Liverpool, but City succumbed to defeat as goals from Fabinho, Mohamed Salah and Sadio Mane rendered Bernardo Silva's 77th-minute consolation meaningless.

After the contest with Montenegro at Wembley, Southgate's side complete their qualifying campaign against Kosovo in Pristina on Sunday.