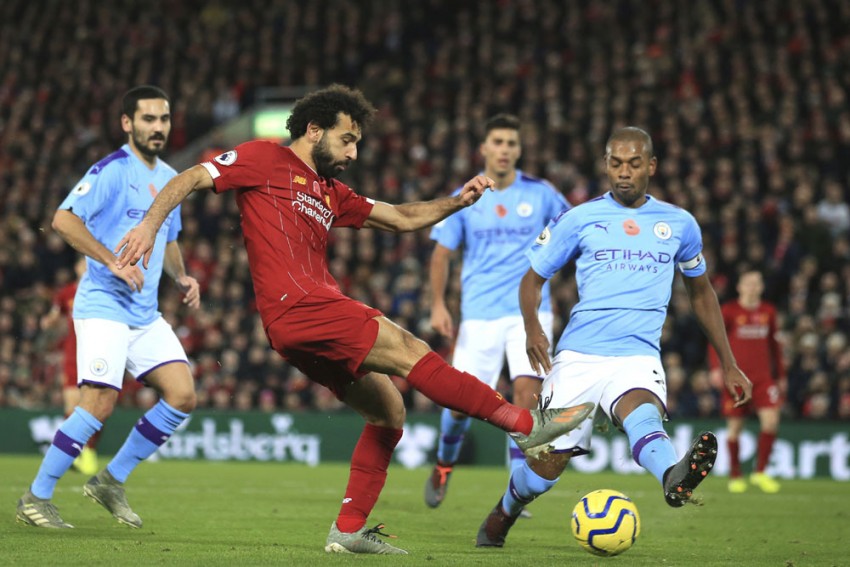 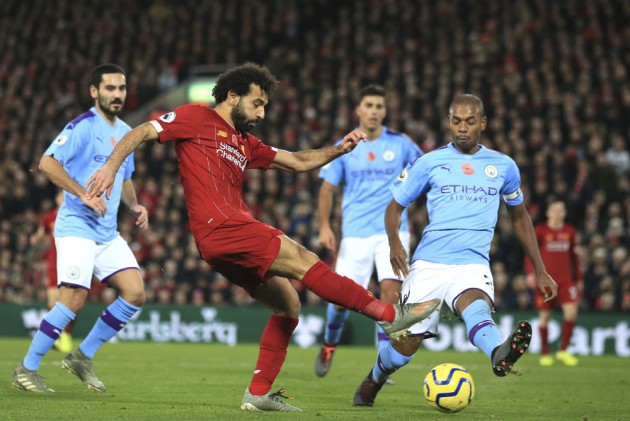 Liverpool ruthlessly dispatched title rivals Manchester City 3-1 in a barnstorming clash at Anfield to open up a commanding eight-point gap at the top of the English Premier League. (More Football News)

Fabinho rifled the Reds into a sixth-minute lead moments after the visitors were left seething when Trent Alexander-Arnold was not punished for a seeming handball in the penalty area.

Mohamed Salah doubled the lead in a pulsating start and Sadio Mane completed the ransacking early in the second half as Liverpool's hopes of ending 30 years of title pain earned a monumental boost despite Bernardo Silva's 78th-minute strike giving the visitors late hope of a revival.

Liverpool – who are now unbeaten in 17 Premier League contests with City at Anfield – have an eight-point lead over Chelsea and Leicester City but perhaps far more significant for Jurgen Klopp's men, is the cushion of nine they have over Pep Guardiola's defending champions.

City were outraged not to be awarded a fifth-minute penalty for handball against Alexander-Arnold and their sense of injustice was exacerbated less 60 seconds later when Fabinho picked up Ilkay Gundogan's poor clearance and lashed home an unstoppable 25-yard thunderbolt.

Despite the setback, the away side continued to press the issue but Raheem Sterling wastefully headed wide from Kevin De Bruyne's whipped free-kick and City were made to pay.

The game was essentially put to bed six minutes after the restart when Jordan Henderson hung up a wonderful cross from the right that Mane gleefully headed in at the far post.

Sterling and Alexander-Arnold were both denied penalties before City game themselves a glimmer of hope when Angelino's low centre was drilled home, via a slight kiss of the post, from Silva.

City had Liverpool on edge again shortly after but Gabriel Jesus failed to make clean contact when Sterling had seemingly laid one on a plate.

Another claim for handball against Alexander-Arnold went unheard and Jesus wasted another golden opportunity as Liverpool saw it out to lay down a huge marker.

What does it mean? It's a long way back for City

Talk of diving and 'tactical fouls' dominated the build-up to this blockbuster clash but any thought Liverpool may have been rattled by the perceived attempt at mind games was quickly dispelled. Last term, City took four points off the Reds which proved vital in pipping Klopp's men by the narrowest of margins. It is too soon to say City's chances of a third straight title are over, but there is now absolutely no room for error for Guardiola's side.

With four yellow cards to his name this term, Fabinho has been walking the fabled 'disciplinary tightrope'. Klopp opted to rest the Brazil international in last week's late come-from-behind win at Aston Villa in order to avoid him being banned against City. It was a gamble that paid dividends, with the defensive midfielder lashing home the opener and doing his part to shackle City's midfield.

For a player with Aguero's incredible scoring record it is remarkable he has now failed to score in eight appearances at Anfield. The Argentina striker had plenty of opportunities to break that duck but was uncharacteristically poor before being hauled off for Jesus in the 71st minute.

Liverpool take a sizeable lead at the top of the table into the international window and resume Premier League duties at Crystal Palace on November 23. City face a tough task at home to Chelsea on the same day.