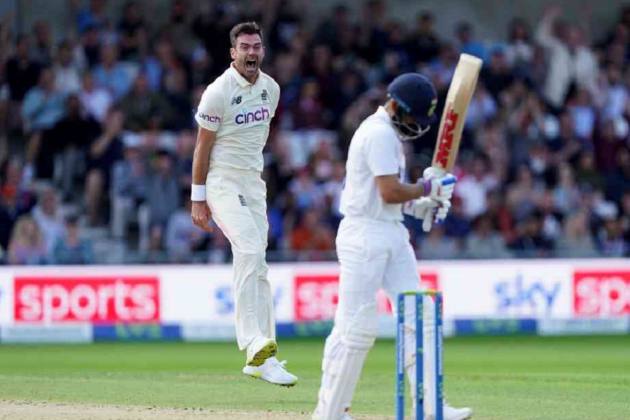 Veteran pacer James Anderson (3/6) and Craig Overton (3/14) claimed three wickets each, while Ollie Robinson (2/16) and Sam Curran (2/21) took two each as the England bowlers wreaked havoc on the visitors.

England reached 21 for no loss at Tea. At the break, Rory Burns (3) and Haseeb Hameed (15) were at the crease.

Indian skipper Virat Kohli won the toss and elected to bat first but the batting unit cut a sorry figure with opener Rohit Sharma (19) and Ajinkya Rahane (18) being the only batsmen to reach double digit scores.

At lunch, India were struggling at 56 for four.

Anderson regained his mojo after a forgettable fifth day at the Lord's as the senior-most England pacer rattled the Indian top-order with three quick wickets.

Anderson (8-5-6-3) was once again back at his best, using his lethal outswingers to good effect to get the wickets of KL Rahul (0), Cheteshwar Pujara (1) and rival skipper Virat Kohli (7), all caught by wicketkeeper Jos Buttler.

Rahul, the in-form batsman, went for an expansive drive early to a delivery that moved a shade in the air with a wobbly seam and took his outside edge into Buttler's gloves.

Pujara, who is going through the worst phase of his international career, got a conventional outswinger after a few incutters, and Anderson forced the batsman to have a feel for the delivery.

Kohli hit an off-drive for three runs but it was amply clear that the Indian captain was suffering from both technical and mindset issues with Anderson picking him once again like it has been his day job for several years.

While Kohli had slightly tweaked his front-foot movement but he dangled his bat away from his body to offer Buttler his third catch of the innings. (with inputs from Agencies)