The 46-year-old Olympic tennis medallist, Leander Paes, says if he’s picked for September’s Davis Cup tie against Finland he is ready to roar in his favourite tournament 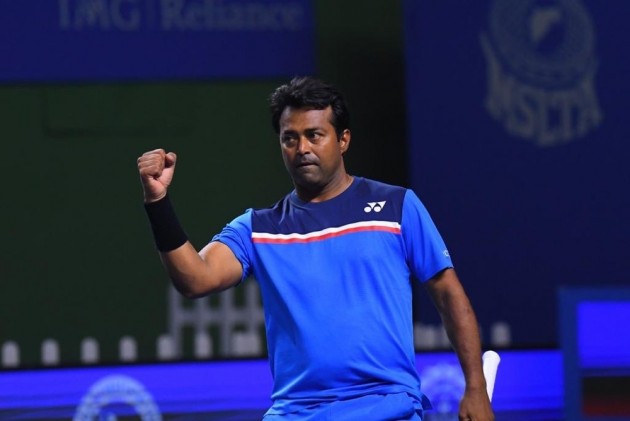 Whenever the Covid-19-enfroced lockdown ends, tennis legend Leander Paes, who was to retire at the end of the ongoing season after an eventful career, will reassess his options looking at several factors. But one of the most important issues for him would be “emotional and mental fitness, and happiness” – and, of course, his “own desires”. Then, of course, he will have to deal emotionally with the two most tempting options: appearing in his eighth consecutive Olympic Games, and one more tie of the Davis Cup – the elixir of his tennis career. These two factors will do their best to ‘blackmail’ Paes (if that was possible) into prolonging his career just a little more. Nothing is final, though.

In an exclusive interview with Outlook, Olympic bronze medallist Paes, who turns 47 on June 17, said that the muscle memory of tennis runs deep in his body, so that, along with fitness, would not be a hindrance if he were to prolong his career. But, at the same, the pragmatic Paes foresees competitive tennis not starting this year. The 2020 Tokyo Olympics have, for the time being, been postponed to 2021, but a final decision about that is yet to be taken. In Davis Cup, India is scheduled to play Finland from September 18 to 20 in Finland in a first round tie of World Group I.

“Right now, I believe, the call of the day is to stay safe, to practice social distancing, good hygiene, to look after our loves ones, and our staff to share the responsibilities. As far as my last season goes, the first thing is to win this battle against Covid-19. Once life comes back to normal, my team will then evaluate whether I should continue or not. Right now, we have a bigger battle to fight,” 18 Grand Slam doubles/mixed doubles winner Paes told Outlook in an Exclusive Interview when asked about his tennis future.

“I think physically I am very fit, strong; but emotionally and mentally is the real task. So, basically those two things are really the important part – to stay emotionally and mentally fit and happy – because you never forget to play tennis. I’ve played for so many years, so the muscle memory is there so deep. The muscle memory of tennis will always be there. The fitness levels and training systems it takes to play in the Olympics will always be there. But the emotional and mental fitness and happiness is important. That’s the focus,” explained the only Indian tennis player to win an Olympic medal (Atlanta 1996).

Asked again to be specific about his realistic chances of playing in his eighth Olympic Games, Paes, who won the junior Wimbledon and US Open singles titles in 1991 and was ranked world No.1., said: “Oh, you can't tell now, because no one knows when the lockdown will finish and no one knows when the tennis will start again. There’s even a talk of the Olympics going to 2022 because the economy has dropped so badly in Japan, or anywhere in the world. So, it’s impossible to answer the question because even I don’t know when the ATP Tour will restart.”

In Davis Cup, India is to play Finland in September, as per the David Cup website. And Paes is gung-ho if that tie takes place as scheduled. “Yes. Definitely, I am looking at that. Against Croatia, doubles was the only match we won recently [India lost 1-3 in a first round match in March]. Doubles is very important in Davis Cup; sometimes a tie rests only on the doubles. So, if the tie happens in September and if I am in chosen, I will put myself forward. I’ve always put myself forward for the country, no matter what,” he said emphatically.

Paes had titled his ongoing last season in professional tennis ‘One Last Roar’. “Yes, I had already announced ‘OneLastRoar’ season. In Australia, I got a wonderful farewell. In Pune, Bangalore, Dubai also I got a wonderful farewell. My last Davis Cup was in Croatia in March,” he said. And then the Indian government announced a nationwide lockdown on March 25 -- and it continues till this day.

Post-Covid-19, Paes’ core team, which includes his Olympic hockey bronze medallist father, medical doctor Vece Paes, will decide on whether or not he should, or could, play more competitive tennis.

“I’ve got a tennis coach, a fitness coach, a mental trainer, doctors, physiotherapist, confidants…it’s a huge team. All of us are very well connected, and we sit and discuss new and innovative ways of how to keep improving and new goals for ourselves. If we have any issues like injuries and the one we are having right now, we make a collective decision. I respect their opinion very much. I have to sit and listen to my own desires. Over the last 30 years, the team has grown big,” says Paes.

For his father, who won the Olympic bronze in 1972 in Munich, is the most important cog in his core team, says Paes. “My father is not just my father: he is my hero, my guru, my confidant, my best friend, and my personal doctor. He is one of the first people I constantly have communication with about my decisions in life and tennis. Also, it is very important at this moment in time to spend time with him because he is a senior citizen; he is 75 and we just celebrated his birthday [April 30] through the lockdown. And has his own medical issues. To be able to look after him is the greatest honour that I can have, more than my career and my life. I’ve a blessing that I’ve a chance to look after my father and take care of his medical issues,” he informed.