Lionel Messi could have been a Premier League player by now if Barcelona had acceded to his demands, but another Clasico now awaits him 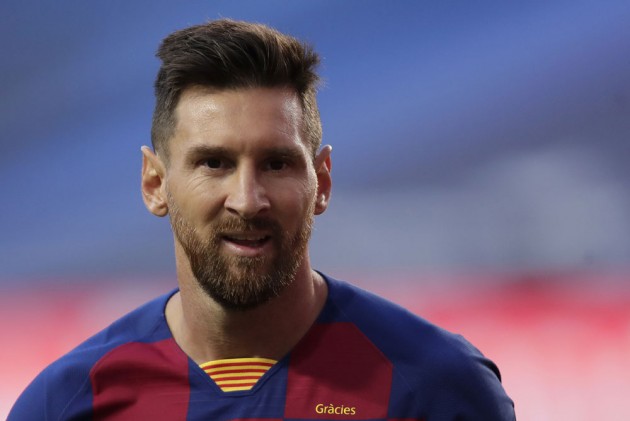 A Clasico showdown against Real Madrid, or West Ham away? (More Football News)

Before Lionel Messi steps out onto the Camp Nou pitch on Saturday, remember this: he had made up his mind, and he had chosen West Ham away.

Playing for Manchester City was Messi's plan for 2020-21, it is believed, and if that meant sacrificing leading Barcelona against their greatest rivals, shucks to it.

Messi must have thought he had nothing left to prove in this fixture, being already the top scorer in Clasico history with 26 goals across all competitions, way ahead of names such as Alfredo di Stefano, Cristiano Ronaldo, Raul and Cesar Rodriguez.

Eighteen of those goals have come in LaLiga, from 27 appearances, and he has averaged one goal involvement per game in the league thanks to nine assists.

However, he has failed to score in his last five Clasico games - three in the league and two in the Copa del Rey.

This weekend, with the world watching, Barcelona need the real Messi to stand up.

Before the king of the Clasico faces Los Blancos one more time, team-mate Ansu Fati was moved to comment this week that "Messi is still Messi".

The 17-year-old spoke after Messi's early penalty helped Barcelona to a 5-1 Champions League win over Ferencvaros.

Yet heading into that game, Barcelona's new head coach Ronald Koeman said Messi's form "could be better", cosseting that in sufficient pleasantries to avoid any blowback.

As for who is right - Fati or Koeman - it is hard to dispute the experienced Dutchman's verdict.

Doubtless Fati loves playing with 33-year-old Messi, because what teenager wouldn't relish every minute playing with an all-time great?

But Messi's numbers are down in the early weeks of this LaLiga season, with his average attempted dribbles per game down from 8.58 in 2019-20 to just 4.75, and his shots on target per game at a relatively meagre 1.75 when he has averaged 2.15 or higher in each campaign over the past decade.

One goal in four LaLiga matches in 2020-21 equates to his slowest start to a season since 2005-06, when the teenage Messi failed to score in his first four games.

16 - Barcelona’s Lionel Messi is the first player in Champions League history to score in 16 consecutive seasons; no player in the competition’s history has scored in more seasons overall than the Argentinian (16 – level with Ryan Giggs). Sweet. pic.twitter.com/aOTEPOcQYu

Those five goalless games in Spain's biggest match have consisted of four starts and one appearance off the bench, amounting to 425 minutes of football without a goal, his second longest run without netting in the Clasico - behind a six-game sequence from April 2014 to December 2016.

He has failed to score with his last 16 shots in the fixture and has not been on the winning side in a LaLiga Clasico at Camp Nou since Barcelona's 2-1 victory in March 2015, having missed the 5-1 success in October 2018 because of a fractured arm.

He has not had a goal involvement - scoring or assisting - in the last three Clasico league games, putting him one away from what from that statistical perspective would be the worst run of his career.

And the goal return from Messi in Barcelona's biggest home league match of the season has been modest - albeit only by his extraordinary standards - for some time.

He scored twice in a 2-2 draw in October 2012 and netted once when the team played out the same result in May 2018, but those are the only goals he has scored in this LaLiga game since a late strike sealed a 2-0 win in 2008.

Nobody has scored more Clasico league goals at Camp Nou than Messi's haul of seven, which he launched with a hat-trick in a 3-3 draw back in March 2007.

But the big-game returns are diminishing with time, or at least that is how it seems.

#TBT to when @setoo9 and Messi scored in #ElClasico to give @FCBarcelona a 2-0 win! #YouHaveToLiveIt pic.twitter.com/nD5OpO0123

Has Messi become a flat-track bully?

The instinctive response is to challenge the use of such a reductive term to describe a footballer so eminent.

The transition happens time and again though, from sport to sport. The ageing superstars who once routinely tormented elite rivals serve up reminders of their most glorious days in flashes, often against more limited opposition than before. Case in point: Messi looked sublime at times against Ferencvaros.

In tennis, Roger Federer can still toy with low-ranked tennis players to the point of doling out early-round humiliations, but will he win another grand slam title, having recently turned 39? No, probably not. Will Messi win another Champions League? No, probably not. It is hard to see it happening at a crisis-hit Barcelona, anyway.

Messi's haul of 25 LaLiga goals last season was his lowest since he scored 23 in the 2008-09 treble-winning campaign, when Samuel Eto'o and Thierry Henry were also scavenging for chances.

But if he is not scoring consistently against Real Madrid, and if he was powerless to prevent Bayern Munich's rout of Barcelona in the Champions League back in August, then where is Messi making his big difference heading into his mid-thirties?

Since the start of August 2018, in LaLiga he has scored eight goals against Eibar, five each against Real Betis, Levante, Alaves and Sevilla, and four apiece against Real Mallorca, Celta Vigo and Espanyol.

Real Madrid and Athletic Bilbao are the two teams who have defied him throughout that time.

If this is to be Messi's sign-off stretch with Barcelona - and given his recent state of vexation that seems highly possible - then it is to be assumed he wants to depart with a swagger rather than a shrug of a season.

Had Barcelona's board acquiesced to Messi's departure at the end of last term, this weekend's kick-off in El Clasico would have coincided with the Argentinian winding down at the London Stadium after a lunchtime outing for Pep Guardiola's City against David Moyes' Hammers.

Perhaps Messi would have tuned in for El Clasico on the team coach; perhaps not.

Messi was prepared to sacrifice the Clasico - the hysteria and the history that surrounds it - and that summed up the schism that had developed between him and the club's leadership.

He has since lost good friends Luis Suarez and Arturo Vidal, offloaded to Atletico Madrid and Inter, and lost some of his sparkle at the same time.

Suarez and Vidal won't be coming back, but the sparkle still might. There were flashes against Ferencvaros - again, take the opposition into account - but a Clasico against a wobbling Madrid side seems as good an occasion as any for Messi to serve up a reminder of his greatness.

If he can lift himself for any game, it must be this one.