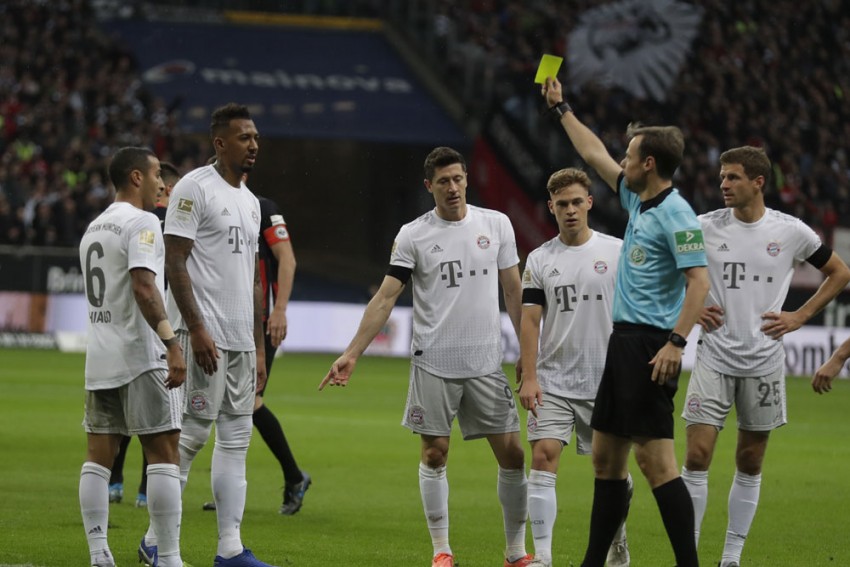 Bayern Munich failed to recover from an early Jerome Boateng red card as they fell to a 5-1 defeat against Eintracht Frankfurt that will heap more pressure on beleaguered coach Niko Kovac. (More Football News)

The pressure has been building on Kovac and his side shipped five more goals on a day that saw Thomas Muller make his 500th appearance for the club.

Filip Kostic and Djibril Sow scored their first goals of the season to punish the champions after Boateng was sent off inside nine minutes.

Bayern threatened a comeback through Lewandowski's 14th league goal of the season, but David Abraham, Martin Hinteregger and Goncalo Paciencia struck in the second half to make it one league win in four matches for the visitors, who slip to fourth in the table.

Boateng was dismissed for a trip on Paciencia following a VAR check from referee Markus Schmidt, who initially showed a yellow card and awarded a penalty, before amending it to a red and a free-kick.

The hosts made the man advantage count 16 minutes later when Sow's shot struck David Alaba and landed in the path of Kostic for a simple finish from close range.

A bad day for Bayern got even worse just after the half-hour mark as a brilliant passing move culminated in Sow calmly converting Kostic's deflected cross at the back post.

Joshua Kimmich had a goal ruled out for offside but Bayern had one back before the interval, Lewandowski spinning away from three men and converting past Frederik Ronnow.

Any hope of a comeback was killed off by Abraham four minutes into the second half, however, with the Frankfurt skipper stabbing home Danny da Costa's inch-perfect cross.

Abraham's central-defensive team-mate Hinteregger headed in a fourth from a corner after 61 minutes and, after Alphonso Davies clipped the post, Paciencia rounded off the scoring late on following some good play from substitute Andre Silva.

What does it mean? Pressure growing on Kovac

Bayern had won three in a row prior to this match, but they have been leaking goals far too freely and have struggled to dominate matches.

Having already been publicly criticised by club CEO Karl-Heinz Rummenigge last month, this third loss of the campaign in all competitions - against his former side - could prove the final straw.

Lewandowski became the first player to net in the first nine games of a Bundesliga campaign last weekend and was on the scoresheet again today.

He took his consolation goal superbly and is arguably the best striker in world football right now, boasting 19 goals from 15 appearances in all club competitions this term.

Bayern started the match in a positive manner, with Serge Gnabry squandering a good chance 87 seconds in.

But a swift counter from Eintracht soon after ended with Paciencia tripping over Boateng's trailing leg and Bayern, despite Kovac's tweaks, went on to ship five goals on a day to forget.

- For the first time since March 2010, Eintracht Frankfurt have won a Bundesliga match against Bayern Munich (D3 L13).
- This was the biggest defeat for Bayern in a Bundesliga match since matchday 26 of the 2008-09 season, when Bayern lost 5-1 at Wolfsburg.
- Bayern's Jerome Boateng has been sent off for the seventh time in the Bundesliga – only Jens Nowotny and Luiz Gustavo received more red cards in Bundesliga history (eight each).
- Thomas Müller played his 500th match in all competitions for Bayern, equalling Bastian Schweinsteiger’s number of games for the club. Since Bayern’s promotion to the Bundesliga in 1965, only eight players have appeared more often for them.

Bayern host Olympiacos in the Champions League on Wednesday, while Eintracht travel to Standard Liege the following day in the Europa League. Borussia Dortmund are next up for Kovac's men in the Bundesliga a week today.