Eibar were willing opponents but still had no answer to Barcelona's brilliant trio of Antoine Griezmann, Lionel Messi and Luis Suarez. 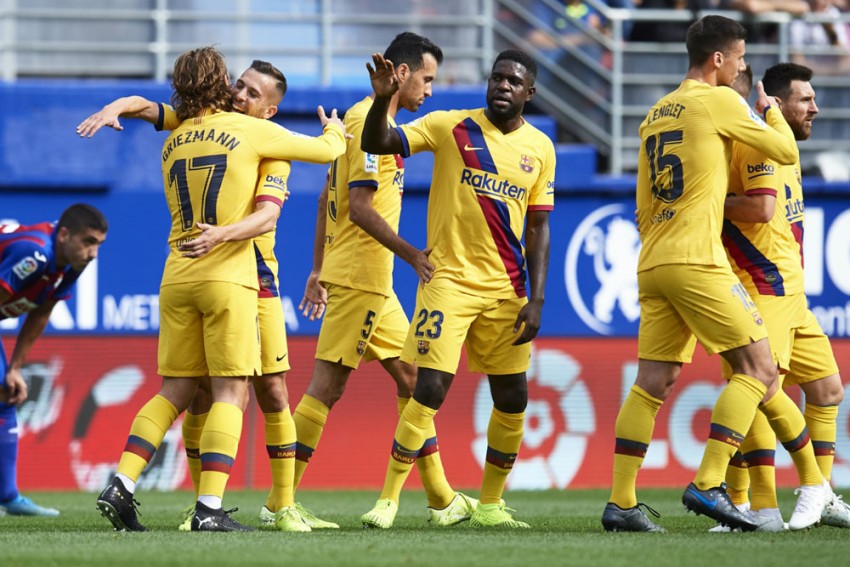 Griezmann has scored his first away goal for Barca after scoring his previous three at Camp Nou, all of them in LaLiga.
Getty Images
Omnisport 2019-10-19T20:22:41+05:30 Eibar 0-3 Barcelona: Antoine Griezmann, Lionel Messi And Luis Suarez Ensure Frantic Week Ends In Comfortable Win 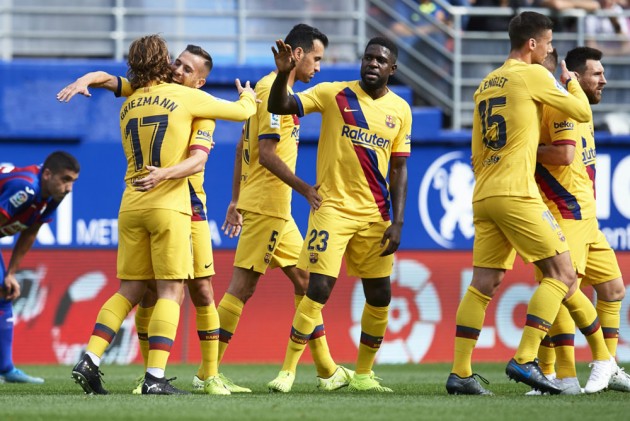 Antoine Griezmann, Lionel Messi and Luis Suarez were all on target as Barcelona coasted to a 3-0 win at Eibar to end a frantic week with a fifth straight victory on all fronts.

Barca opted to travel to the Basque Country early on Thursday amid the political unrest in their home city as a result of nine Catalan political leaders being dealt long prison sentences for their roles in the region's 2017 referendum and subsequent declaration of independence.

The violent scenes that broke out in protest led to the postponement of next week's Clasico with Real Madrid, but it was back to business for Ernesto Valverde's men at Ipurua.

Griezmann opened the scoring with a classy 13th-minute goal and teed up Messi to double the lead after neat work from Suarez, who scored in a seventh straight outing against Eibar to round out the routine triumph.

Suarez's audacious effort just inside the opposition half was not in keeping with the tone of the early exchanges in which Pedro Leon blazed over from one of several dangerous Eibar crosses.

But Pablo de Blasis' untimely slip allowed Griezmann to race onto Clement Lenglet's long punt and he had the composure to clip past Marko Dmitrovic and find the net via the post.

It was game over when Messi finished a wonderful team move just shy of the hour. Suarez combined brilliantly with Griezmann and he teed up the Argentina superstar to slot into the bottom-right corner.

Messi then turned provider, racing onto Griezmann's sumptuous throughball and unselfishly laying on for Suarez to pass into an open goal.

What does it mean? Barca hitting their stride

Messi's injury-hit start to the campaign coincided with some underwhelming early season performances. It took a while for Barca to run through the gears here, perhaps the midweek turmoil playing a part in that, and yet it ultimately ended up a comfortable day for a fourth straight LaLiga win that puts them top – albeit Real Madrid can return to the summit later on Saturday.

One senses Valverde still has solutions to find defensively, but up top there is a growing understanding between Messi, Griezmann and Suarez. The trio combined to glorious effect for Messi's goal and the captain set up Suarez when he could have gone for goal himself for Barca's third. It was an ominous warning to their LaLiga rivals.

Eibar were arguably the more imaginative team in the opening stages with Pedro Leon and Fabio Orellana dangerous out wide. But Charles did not do enough from his central striking position to put pressure on Umtiti or Lenglet.

- Griezmann has scored his first away goal for Barca after scoring his previous three at Camp Nou, all of them in LaLiga.

- Messi has scored in nine of his 10 LaLiga games against Eibar, 16 goals altogether.

- Suarez has 10 goals against Eibar in LaLiga, more than against any other opponent (alongside Real Betis).

- No other side have won more LaLiga games against Eibar than Barcelona (10). In addition, the Blaugrana are the team with the most goals scored against them in the top-flight (36).

- Barca coach Valverde has only lost one of his 11 LaLiga games against Eibar (W8 D2), 2-0 at Ipurua in August 2015 while in charge of Athletic Bilbao.

Barca are back in action on Wednesday when they visit Slavia Prague for matchweek three of the Champions League. Eibar travel to Real Valladolid next Saturday.

India Vs South Africa: Rohit Sharma Has Made Adjustments To His Game Plan, Says Vikram Rathour