Dom Bess struggled to make an impact against India's batsmen, but it could have been a different story if an appeal had gone his way 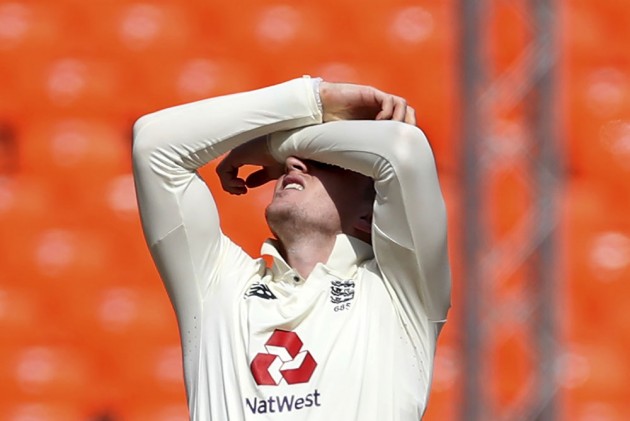 England are confident spinner Dom Bess will rediscover his rhythm after being left frazzled by India's batsman and his own wayward line on day two of the fourth Test.

India reached 294-7 thanks to a stunning 115-ball century from Rishabh Pant, who helped the hosts establish an 89-run lead, after surviving a big lbw shout from Bess shortly before tea.

Bess finished without reward, with figures of 0-56 in 15 overs pointing to a lack of threat from the 23-year-old off-spinner. He bowled with a lack of control at times, throwing in far too many full tosses, and will want to get among the wickets on Saturday morning and put a bad Friday behind him.

He was recalled for this contest in Ahmedabad having been left out for the second and third Tests, both of which England lost after making a winning start to the series in Chennai.

England spin coach Jeetan Patel said Bess had "needed a break" and was "jaded" by his experience of that opening match.

But Patel trusts Bess is capable of troubling batsmen again, and said of his disappointing performance so far in this match: "It's no real one thing, it's just a fact it didn't work out for him today.

"There's still room for him to improve, like everyone in this group, but Bessy's still very young. He's still learning how to bowl red ball at Test level which is very difficult. He'll be better for these experiences going forward.

11 - Dom Bess has bowled 11 full tosses so far in this Test match, currently more than every other player combined (9). Length. #INDvENG pic.twitter.com/klsVgHSP7s

"There's some things with Bessy that we'd like to get into. He's got time after this Test match to get back and look at that, but right now he's got a job to do and that's getting those three wickets tomorrow.

"He would have liked to have bowled a lot better today and liked to have given a lot more to the group, and it didn't work out for him. They played him very well. They sat on him and looked for balls to score off when they could.

"Right now he will be quite down and quite tired, but the beauty of this game is the fact there is another opportunity tomorrow."

Ben Stokes, by contrast, was hailed as England's 'Superman' by Patel.

Stokes took 2-73 in 22 overs to follow up his 55 with the bat on Thursday, and at stumps he appeared exhausted, having been running in amid searing heat.

"Stokesy's your man. He's the guy you want to go to for anything really," Patel said. "He's almost like a Superman with this sort of stuff. He really does enjoy the tough battles.

"He bowled a lot of overs today. He almost bowled the whole first session and he got some crucial wickets for us on the way.

Patel said Pant's innings was "pretty special" but claimed the match was "still quite in the balance".

"He came out after that tea break and took it to us," Patel said of Pant's effort. "Hats have to go off to how they played that."