Deepika misfired four 7s as An, who had broken a 25-year-old Olympic record en route to topping the ranking round, wrapped up the women's individual match 6-0 in less than six minutes 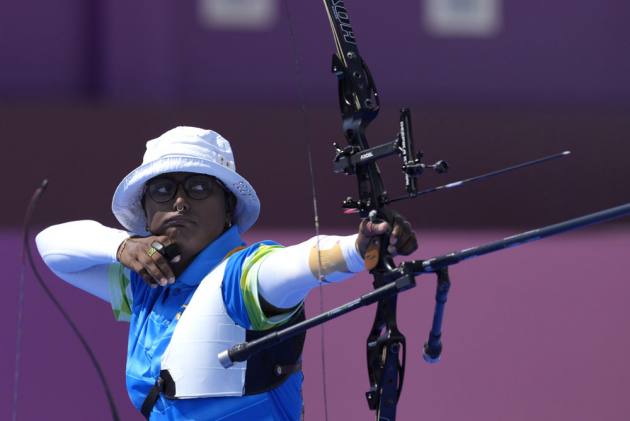 World number one archer Deepika Kumari's quest for an Olympic medal ended in heartbreak for the third time as she surrendered tamely to Korean top seed An San in straight sets in the quarterfinals in Tokyo on Friday.

Deepika misfired four 7s as An, who had broken a 25-year-old Olympic record en route to topping the ranking round, wrapped up the women's individual match 6-0 in less than six minutes.

For the three-time Olympian Deepika, this was yet another heartbreaking outing at the Games.

In the 2016 Rio Olympics, she had lost in the pre-quarterfinals, while at her maiden Olympics in London, where she had gone as a number one ranked player, she had crashed out in the opening round.

Deepika's husband Atanu Das is the only Indian left in contention for a medal as he made the pre-quarterfinals on Thursday with a stunning shoot-off win over two-time Olympic champion Oh Jin Hyek.

In his last-16 match slated on Saturday, Das will face home favourite Takaharu Furukawa, an individual silver medallist at the 2012 Olympics and a team bronze winner here.

Earlier in her last-16 match, Deepika held her nerves to pip 2017 world champion Ksenia Perova of the Russian Olympic Committee in a thrilling one-arrow shoot-off to seal a 6-5 (10-7) win.

Locked 5-5 after the regulation five-setter, the 27-year-old Indian delivered a perfect 10, hitting the bull's eye, to topple the team silver medallist at the 2016 Rio Olympics.

Starting off the one-arrow shoot-off, the Russian crumbled under pressure as she misfired a 7 as a composed Deepika finished it off in style.