Coronavirus Pandemic: All Remaining I-League Matches To Be Played In Empty Stadiums 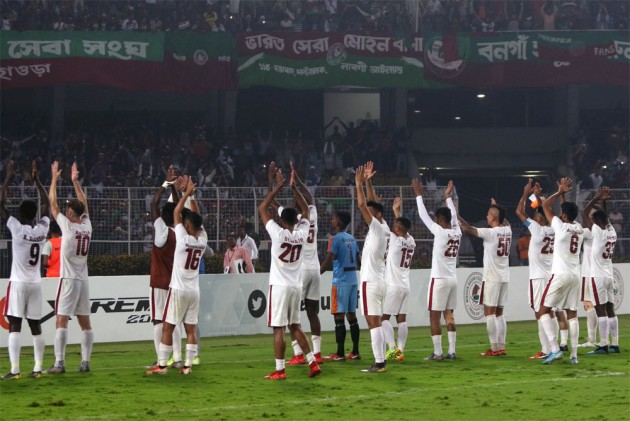 All the remaining 28 matches of the I-League, including Sunday's marquee Kolkata derby between champions Mohun Bagan and East Bengal, will be played in empty stadiums owing to the COVID-19 pandemic, the All India Football Federation (AIFF) said on Friday.

The decision was taken after the AIFF and I-League officials had a Skype meeting with club representatives following Thursday's Sports Ministry advisory asking national federations to follow the Health Ministry's guidelines and avoid large gatherings in sports events.

"Adhering to the advisories issued by the Ministry of Health & Family Welfare, AIFF has decided to complete the remaining matches of the 2019-20 edition of the Hero I-League behind closed doors," the AIFF said in a statement.

"Besides team officials and players; match officials (referees), medical staff, TV Crew, accredited media, and required security staff -- none would be allowed to be in the premises of the stadium on match day, and during official practice the preceding day," it said.

This will be the first time in the country that so many competitive football matches under the aegis of the AIFF will be played closed doors.

The development was, however, on expected lines as several sporting events, including India's ODI matches against visiting South Africa and the Indian Super League football final in Goa on Saturday, will also be played without any spectators.

A top AIFF official had on Friday said that playing the I-League matches behind closed doors was the most likely option after the Sports Ministry advisory on Thursday though the national football governing body decided to hear the clubs first before taking a final decision.

The first match to be played behind closed doors will be the one between Real Kashmir FC and TRAU FC at TRC ground in Srinagar on Saturday. The enthusiastic Real Kashmir supporters who have been turning out to pack the venue most of the time will be robbed of the opportunity to cheer their team.

The football-loving fans of Manipur will also be deprived of watching their home team Neroca FC playing against defending champions Chennai City FC at Khuman Lampak Stadium in Imphal.

But the match which will be hit the most as far as football-mad spectators are concerned is Sunday's Kolkata derby between champions Mohun Bagan and East Bengal at the Salt Lake stadium in Kolkata.

This will be the last Kolkata derby of the I-League era as a merged side of Mohun Bagan and ATK will play in the ISL from next season.

The first leg of this season's Kolkata derby was won by Mohun Bagan 2-1.

In any case, it was known on Thursday that the Kolkata derby would be played without spectators as the city police had asked the home team (East Bengal) not to sell tickets for the match in view of the COVID-19 pandemic.

Mohun Bagan have already clinched the I-League title on Tuesday with four rounds still to be played but the AIFF cannot cancel the 28 remaining matches as a lot are still at stake.

"There will be relegation and promotion and other things. These cannot be decided without playing the full league. So, we have to hold all the remaining matches," an AIFF official said.