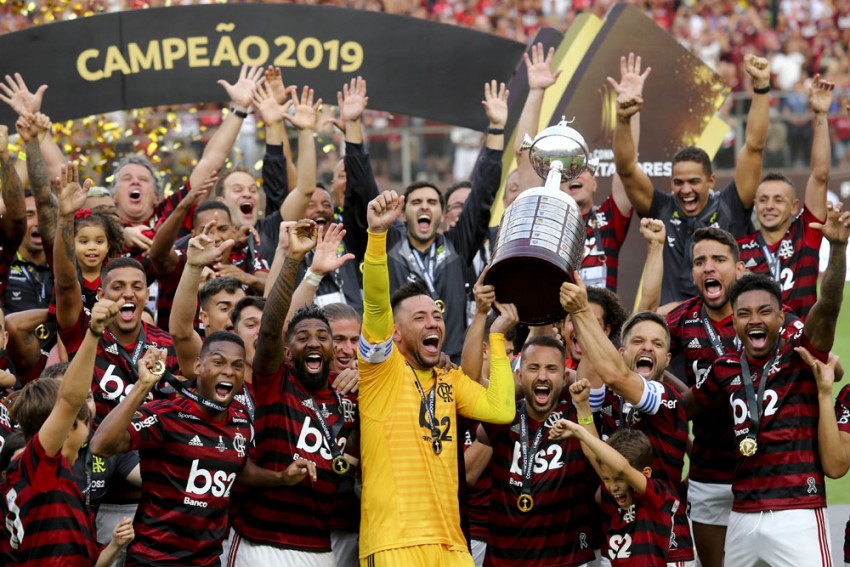 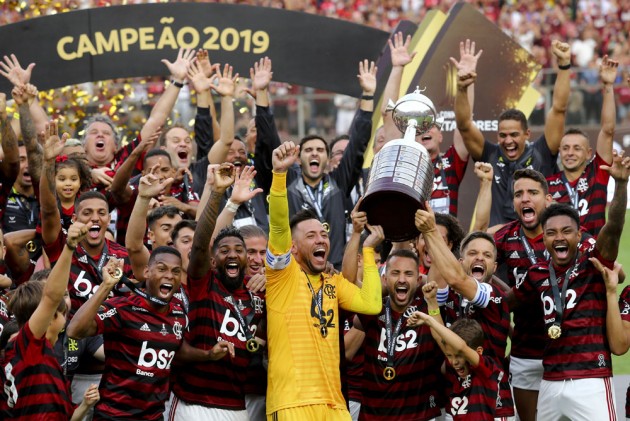 The one-off match, relocated to Estadio Monumental in Lima due to civil unrest in Santiago, looked set to be settled by a first-half strike from Rafael Santos Borre.

Marcelo Gallardo's men, bidding to become the first team to win back-to-back titles since Boca Juniors in 2001, had the game largely under control until Gabriel levelled in the 89th minute.

The striker then smashed home on the half-volley in the second minute of injury time before being sent off along with Exequiel Palacios in one of the most dramatic finales to the competition's recent history.

Without a goal from open play in this year's tournament, Borre needed just 14 minutes to break the deadlock, firing low past Diego Alves on the turn from 12 yards out after Gerson and Willian Arao had each pulled out of clearing Ignacio Fernandez's cut-back.

River were comfortable with their lead, keeping Flamengo firmly at arm's length while threatening a second via a strike from distance from Palacios.

Flamengo at last had a golden chance to equalise 10 minutes into the second half, only for Gabriel to be denied by a block from Nicolas de la Cruz – contentiously with his upper arm – before Franco Armani thwarted Everton Ribeiro on the rebound.

As pressure began to build, Flamengo left themselves open to the counter-attack and Palacios shot wide when teed up by the persistent Matias Suarez, who won back possession in the opposition box.

It proved to be a crucial miss, with Gabriel tapping into the unguarded net after Giorgian de Arrascaeta spun in behind the River defence and pulled the ball across goal.

Three minutes later, Gabriel pounced on a bouncing ball and lashed beyond Armani to send the Flamengo fans into raptures.

Booked for taking off his shirt in celebration, Gabriel was then sent off for his part in an altercation that also saw Palacios dismissed, but nothing could dampen Flamengo spirits.

What does it mean? Gallardo legacy tarnished by three minutes of madness

This was a Flamengo side with the experience of Alves, Filipe Luis and Rafinha and the goalscoring excellence of Gabriel. They were made to look very ordinary almost for the whole game thanks to Gallardo's brilliant set-up.

But then, suddenly, the game plan collapsed and Gabriel reminded the world why he has been one of South American football's most dangerous forwards in 2019.

Gallardo has worked wonders at River but, if he does indeed take the Barcelona job in the coming months, he will leave Argentina with pangs of regret.

After barely a sniff of a chance – never mind a goal – for so long, Gabriel came to life to fire Flamengo to a first Libertadores title since 1981. Does a return to Europe beckon for the Inter loanee?

Palacios could have ended the contest had he been more clinical when set up by Suarez. Perhaps he realised that all too well when he saw red for a frustrated kick out at Gabriel in injury time.

River take on Newell's Old Boys in the Superliga next Saturday. Flamengo's next outing is a league clash with Ceara on Wednesday evening.