Brazil has struggled to find a world-class striker since the 2006 World Cup, when an out of shape but still deadly Ronaldo played his fourth and last edition. 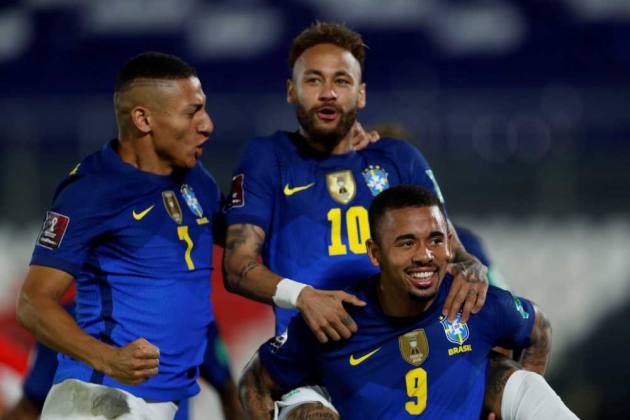 Brazil has always produced some of the best goal scorers in soccer. (More Football News)

But as the Copa America approaches, Brazil coach Tite knows he doesn't have a Ronaldo or Romario type of target man to rely on.

Instead, Tite is split between four options going into Sunday's opener against Venezuela in Brasilia.

Gabriel Jesus, Roberto Firmino, Richarlison and Gabriel Barbosa are in contention. Combined, they have scored 45 goals for the national team. In contrast, Neymar has 66 by himself.

Brazil has struggled to find a world-class striker since the 2006 World Cup, when an out of shape but still deadly Ronaldo played his fourth and last edition. The team's target men in the last three World Cups scored only four goals in 17 matches.

Brazil coach Tite sees the Copa America as a key preparation for next year's World Cup, and it's a great opportunity for one forward to stake a claim to a starting place in Qatar.

"Gabriel Barbosa fluctuates and he can have a very strong finishing power. Jesus is a natural, he can get to the wings and (do well) in one-on-ones. ... Richarlison too," Tite said before the 2-0 win at Paraguay on Tuesday in World cup qualifying.

"And Firmino is a No. 9 who also becomes a 10 and gives you a connection with Neymar."

Tite's first choice until recently was the 24-year-old Jesus. He scored 14 goals in 42 matches for Manchester City this season, a figure he acknowledged was disappointing. The Brazilian recently said he was affected by COVID-19 earlier in the year.

The 29-year-old Firmino had his lowest scoring season since he joined Liverpool in 2015, with only nine goals in 48 matches.

Richarlison had a better club season, scoring 13 goals in 40 matches for Everton. But Tite believes the 24-year-old is better as a winger, meaning he is a substitute for Neymar — who did not play in the 2019 Copa America due to injury.

Out of Brazil's 16 goals in World Cup qualifiers, Firmino and Richarlison scored three each. Jesus has none. He is unlikely to start for Brazil unless Tite chooses to use him as a winger, giving a central position to Neymar, as he did in the win at Paraguay.

Many Brazilian fans would like to see Barbosa, known as Gabigol, given a chance. A flop at Inter Milan and Benfica, the 24-year-old Barbosa has been a massive success at Flamengo since returning home two years ago.

Barbosa scored 38 goals in 52 matches for his club in 2020. This year he netted 13 goals in 12 matches, though the more competitive Brazilian championship is yet to start.

Barbosa started in Brazil's 2-0 win against Ecuador but did not score.

If none of the forwards can deliver, Brazil will have to keep depending on Neymar for its goals.

"National teams build themselves over time, that's what they are like," Tite said. "We don't have a lot of time together. And sometimes even during a match we will have to look for alternatives."