Copa America: Brazil Beat Peru 4-0 To Move Atop Group B

The result pushed Brazil atop the Group B standings with six points. Colombia are two points behind after its draw with Venezuela. 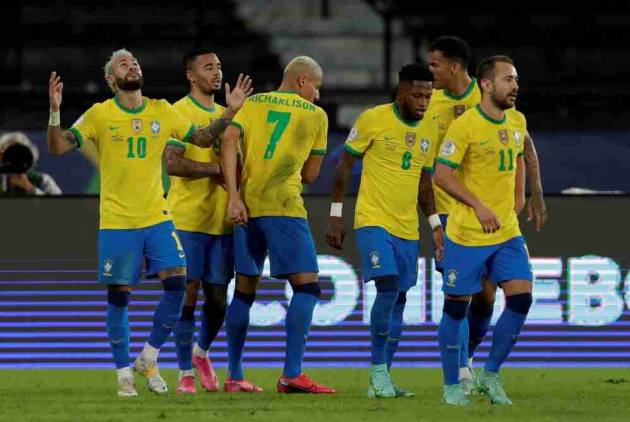 Brazil changed half of its starting lineup to face Peru in its second Copa America match and still cruised to a 4-0 victory.  (More Football News)

It was the Selecao's ninth consecutive victory, and another display that suggests the tournament hosts are the favorites to defend their South American title.

The result puts Brazil atop the Group B standings with six points. Colombia are two points behind after its 0-0 draw with Venezuela.

As coach Tite promised, Brazil is using the Copa America to prepare for next year's World Cup in Qatar. Six players who missed the 3-0 win against Venezuela were in the starting lineup against Peru.

Brazil opened the scoring in the 12th minute after Gabriel Jesus crossed and Sandro hit it home from close range. But the new players didn't adapt as well as the coach expected.

“Our first half was not what we anticipated,” Tite said.

Everton Ribeiro and Richarlison stepped in, and Brazil appeared more assured in the second half.

In the 68th, Neymar received the ball at the edge of the Peruvian box and beat goalkeeper Pedro Gallese with a low crossed shot.

Peru stepped up the pressure, but Brazil moved further ahead in the 89th when Ribeiro scored from close range, his first for the national team. Richarlison, who went on at halftime, scored the last goal of the match in added time after two saves by Gallese.

Tite said his lineup had taken time to make the kind of adjustments that will eventually come naturally.

“It takes a while. In the second half we used an excessive number of strikers, but that's because we thought that is what the match required,” he said.

Asked whether South American teams are offering Brazil a tough enough challenge, Tite said the the continental competition was good but he'd also like to play European teams.

“We want Spain, Portugal, we want all those experiences,” he said. “But the calendar doesn't help.”

Brazil has won 42, drawn 10 and lost only four matches under Tite. Brazil's next match in the tournament will be on Wednesday against Colombia.

The top four teams in each group advance to the knockout stage. (AP)