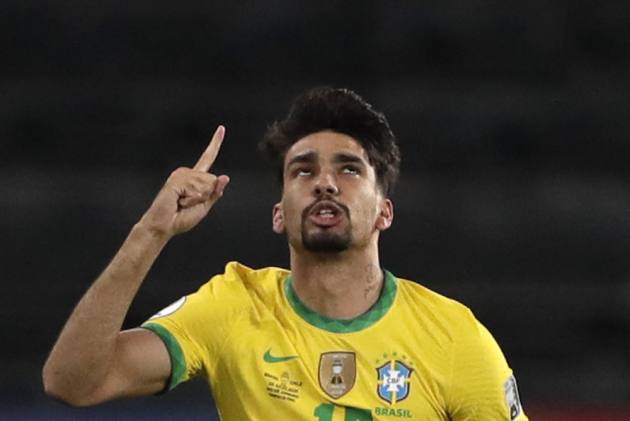 When Lucas Paquetá left the pitch in pain at the end of Brazil's 1-0 win over Peru at a Copa America semifinal, there was concern among teammates whether he would play in Saturday's final. (More Football News)

Few at the start of the tournament would have thought that the 23-year-old would become such a key Brazilian player.

Midfielder Paquetá had a cut on his left leg, but Brazil's medical officials say he will be fit for the decider at the Maracana Stadium, the same arena where he first appeared as a Flamengo winger in 2016.

Brazil's opponent in the final will be known on Tuesday when Argentina and Colombia meet.

Paquetá scored the winners against Chile and Peru in the knockout stage, played in five out of six matches and became a frontrunner to take a position that once belonged to Philippe Coutinho.

Still evolving as a passer and a finisher, Paquetá also seems to have established a partnership with Neymar — on the pitch and in funny dances to celebrate the goals they score for Brazil.

"Paquetá is a great player, he is growing in every match for the national team. He had a great season at Lyon and he is showing he can be a very important player for us," Neymar said.

"I am happy for the match he played, he was great. It is always good to find great players at the Selecao."

The Brazilian was first called up by Tite after the 2018 World Cup, when he was at Flamengo. The coach continued to bring him to the Selecao despite unconvincing performances for AC Milan.

Last year, Paquetá moved to Lyon and had a good first season, with 10 goals and six assists in 34 matches.

The red card to Gabriel Jesus during the quarterfinals against Chile allowed Tite to start with Paquetá in the semifinal — he had entered the previous game as a substitute.

One of Tite's assistants, former Brazil midfielder César Sampaio, said recently that Paquetá has given "positive surprises" during his time at Copa America.

"We didn't know he could perform in some functions, and he is doing them very well," Sampaio said.

"This athlete can do his part, which is more in transitions and skills, but he also also contributes defensively. He is very productive."

As a winger, Paquetá was also in Brazil's squad that won Copa America in 2019. But he only played for a few minutes in the quarterfinal against Paraguay.