Brought on as a substitute with seconds remaining in extra time, Kepa Arrizabalaga kept out two spot kicks as Chelsea escaped with 6-5 victory 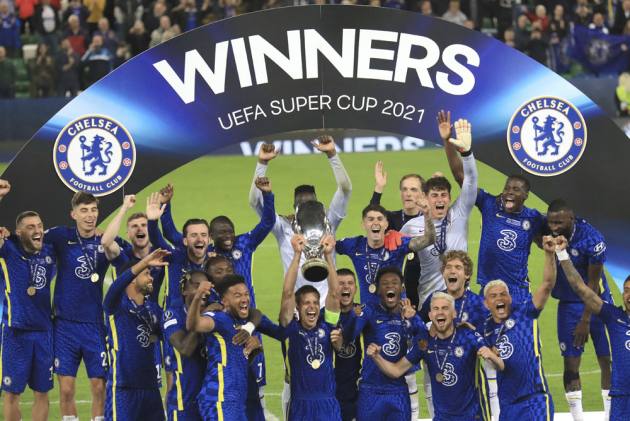 Thomas Tuchel made the bold call, and Kepa Arrizabalaga made the big saves. (More Football News)

Brought on as a substitute with seconds remaining in extra time, Kepa kept out two spot kicks as Chelsea beat Villarreal 6-5 in a penalty shootout to win the UEFA Super Cup on Wednesday.

Tuchel, the Chelsea manager, has been informed by his team of statisticians that Kepa has a better record at saving penalties than first-choice goalkeeper Edouard Mendy, so the substitution was made in the 119th minute of a match that ended 1-1 after extra time.

Kepa had already saved a penalty from Aissa Mandi when he dived low to his right again and parried out Raul Albiol's attempt in what proved to be the final kick of the shootout at Windsor Park in Northern Ireland.

As Chelsea's players sprinted from the halfway line to celebrate with Kepa, one of the first to reach him was Mendy.

“It's fantastic how Edu accepts it,” Tuchel said.

“ We needed to do what's best for the team. ... There is proof that Kepa is better in this discipline.”

Less than 10 weeks after Chelsea's 1-0 win over Manchester City in the Champions League final in Porto, Cesar Azpilicueta was again lifting a European trophy to the backdrop of fireworks and tickertape.

Among the players celebrating on the podium behind him was Hakim Ziyech, who had his right arm in a sling after a suspected dislocated shoulder in the 40th minute — 13 minutes after putting Chelsea into the lead by converting a cross from Kai Havertz.

That was canceled out by Gerard Moreno in the 73rd for the Spain international's record 83rd goal for Villarreal — breaking the record he shared with U.S.-born former Italy striker Giuseppe Rossi. Moreno exchanged a one-two with Boulaye Dia before lifting his shot over Mendy and into the top corner.

Villarreal was playing in the Super Cup as the Europa League champion, a tournament it won by beating Manchester United in a penalty shootout. On that occasion, every one of its players converted their penalties in the shootout before goalkeeper Gerónimo Rulli saved from opposite number David De Gea to seal an 11-10 win.

Rulli was on the bench Wednesday, with Sergio Asenjo starting as goalkeeper and he saved the first kick of the shootout from Havertz. Chelsea scored its next six, while Kepa saved Villarreal's second — from Mandi — and then Albiol, Villarreal's 35-year-old captain.

“I was ready, because I knew this might happen,” Kepa said.

Kepa memorably refused to come off near the end of the English League Cup final in 2019, despite being called to the bench by then-manager Maurizio Sarri. Backup keeper Willy Caballero, a penalty specialist, was ready to come on as a replacement and it led to Sarri almost storming off down the tunnel at Wembley Stadium.

Wednesday's match -- billed as the most prestigious ever to be staged in Northern Ireland -- was played in front of 13,000 people, with Windsor Park at 70% capacity during the pandemic and spectators required to wear face masks.