Eden Hazard scored from the penalty spot and substitute Rodrygo added a second as Real Madrid beat Inter 2-0 in the Champions League. 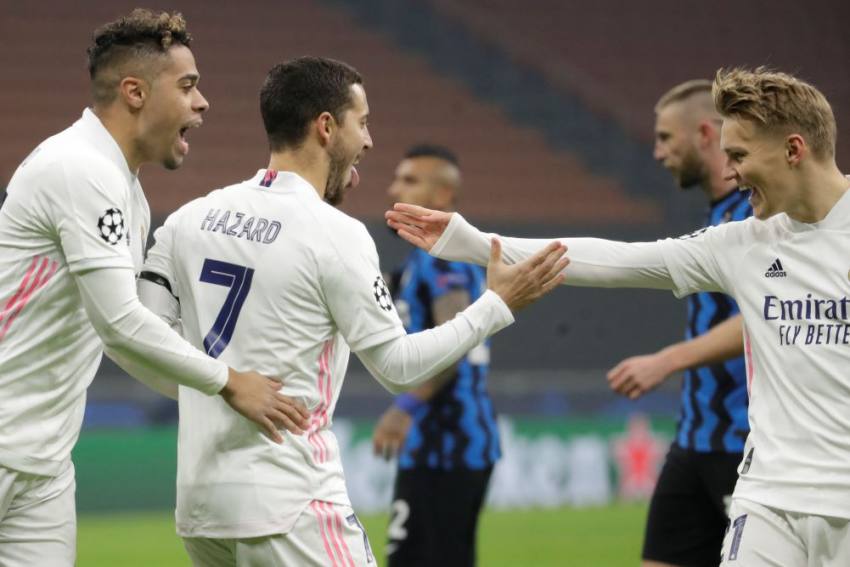 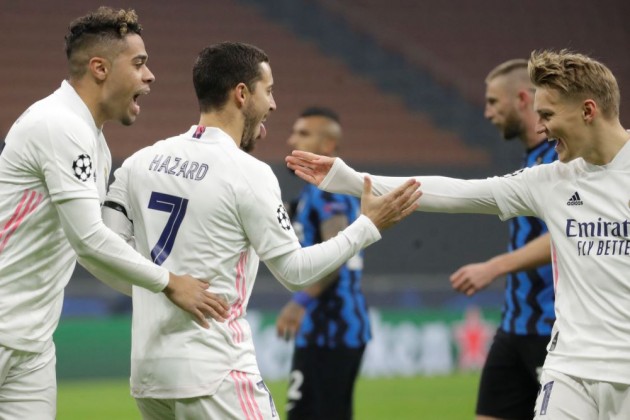 Inter are on the verge of exiting the Champions League after losing 2-0 to Real Madrid in Wednesday's clash at San Siro. (More Football News)

Madrid won the reverse fixture 3-2 earlier this month to revive their Group B campaign and they made a strong start to what was the first meeting between these sides at Inter's iconic ground since 1998.

Eden Hazard converted an early penalty - his first goal in the competition in three years - and Inter's task was made all the more difficult when Arturo Vidal was sent off for dissent with 33 minutes played.

Madrid added a second goal through substitute Rodrygo's volley to move a point behind Borussia Monchengladbach in second, with Inter five points worse off in fourth heading into the final two rounds of fixtures.

Nicolo Barella clipped the heels of Nacho Fernandez inside the box early on and Hazard powerfully dispatched the penalty despite Samir Handanovic guessing the right way.

Lucas Vazquez sent a 25-yard drive crashing against the base of the post and Hazard was denied by Handanovic as Madrid, without star striker Karim Benzema and skipper Sergio Ramos among others, pushed for a second.

Inter struggled to create anything of note and lost Vidal to a couple of quickfire yellow cards before half-time for dissent, the former Barcelona man reacting angrily to a penalty call not going his way.

The hosts had another penalty shout rejected when Roberto Gagliardini went to ground under pressure and they were further frustrated just short of the hour mark as Rodrygo - on the field for 32 seconds - met Vazquez's back-post cross and steered in.

Thibaut Courtois was tested for the first time with 82 minutes played but routinely kept out Ivan Perisic's shot as Zinedine Zidane's men saw out a comfortable victory.

What does it mean? Pressure building on Conte

This match was described as a "final" by Conte and Inter, who had never previously lost at home to Madrid in European competition, simply did not turn up.

The hosts had just one shot on target and, while they were clearly not helped by Vidal's sending off, Madrid looked the better side in a game that saw them boast 62 per cent possession.

Inter have failed to win any of their first four Champions League games in a campaign for the first time and are all but out of the competition, needing to win their remaining two matches and for other results to go their way.

Having spoken on the eve of the game about his desire to see out his career at Madrid, this was the perfect occasion for Modric to show that he is far from past it, as his critics might suggest.

Toni Kroos may have had more touches of the ball and attempted more passes than Modric, but the Croatia midfielder played a joint-high three key passes and no player turned over possession more times (nine).

Vidal lets his side down

The fiery midfielder felt he was fouled in the box by Raphael Varane but referee Anthony Taylor disagreed. He refused to back down after being issued a yellow and a second soon followed, leaving Inter with 10 men for the best part of an hour.

Former Bayern Munich and Barcelona man Vidal is just the third player to have been sent off for three different clubs in the Champions League, joining a short list that also includes Patrick Vieira and Zlatan Ibrahimovic.

Inter, who have won just one of their last six matches in all competitions, travel to Sassuolo on their return to Serie A action on Saturday.

Madrid will be looking for a first LaLiga win in three outings when they host Deportivo Alaves on the same day.