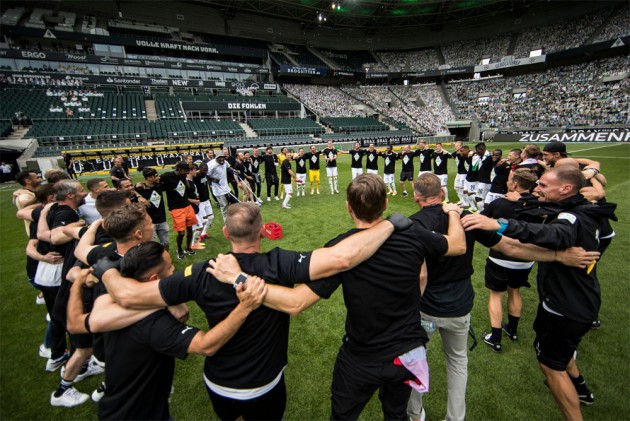 Gladbach earned a 2-1 home victory over Hertha on Saturday to ensure they will be back in Europe's elite club competition for the first time since the 2016-17 campaign.

They were denied a place in the top four on the final day of last season when they lost at home to Borussia Dortmund while Leverkusen beat Hertha.

But Gladbach ensured there would be no repeat and this time they were celebrating after defeating the side from Berlin.

Jonas Hofmann's seventh-minute opener settled any nerves for the hosts.

He was set up by Breel Embolo and roles were reversed when Hofmann created Gladbach's crucial second with 12 minutes remaining, which was scored by the Switzerland striker.

Vedad Ibisevic got one back for Hertha but Gladbach were not to be denied.

It meant disappointment for Leverkusen even though they did what was required of them to stand a chance of qualifying, defeating Mainz 1-0 at home courtesy of Kevin Volland's second-minute goal.

Last week's defeat at Hertha ultimately proved costly for Leverkusen, with Gladbach surging up to fourth with three straight wins to wrap up the season.

Leverkusen will hope to bounce back in the DFB-Pokal final against Bayern Munich on July 4, while they are also still in the Europa League.

RB Leipzig, meanwhile, were all but mathematically certain of a Champions League spot going into the final day of the campaign.

They sealed a third-place finish with a battling 2-1 win at Augsburg, with Timo Werner scoring a double on his final appearance for the club.

Leipzig would have ended up fourth had Werner not scored the winner 10 minutes from time.

It's official! We are in the @ChampionsLeague next season pic.twitter.com/YzmCrIQTLz

Dortmund were three ahead of Leipzig, who finished on 66 points, while Gladbach and Leverkusen ended up with 65 and 63 respectively.

Hoffenheim's win over Dortmund on the last day saw them move above Wolfsburg, who lost against Bayern, to finish sixth and ensure automatic entry to the Europa League group stage.

Seventh-placed Wolfsburg will now have to go through the qualifying rounds.