The Sunil Chhetri-led Blues were competing in their second season. Last year they lost to Chennaiyin FC in the final. 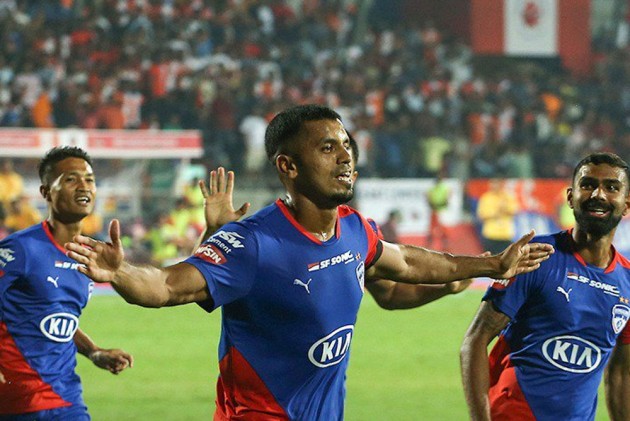 Bengaluru FC became only the third team to lift the glittering Indian Super League (ISL) trophy after ATK and Chennaiyin on Sunday. In a thrilling final, the Bengaluru-based outfit beat FC Goa by a very late solitary goal in extra time at the Mumbai Football Arena, Mumbai.

Full-back Rahul Bheke scored in the second half of extra time to help the pre-season favourites edge past Goa 1-0. The 28-year-old defender from Mumbai scored in the 117th minute after both teams were locked goalless in regulation time.

The right-back took the title-winning header from a Dimas Delgado flag-kick 11 minutes after Goa lost the services of Ahmed Jahouh through a second booking in the 105th minute of the tense final.

The Sunil Chhetri-led Blues were competing in their second season. Last year they lost to Chennaiyin FC in the final.

This is Bengaluru FC's sixth trophy in as many seasons. "We feel on top of the world," skipper Chhetri said after the match.

"We topped the league table like last year. We lost the final that time, but this year's story is different. We knew our power was in attack. Had to work hard in defence as they attacked very well," striker Miku said.

"We pushed so much in extra time, got a red card and that changed the game. We did really well throughout the season. We deserved to win but it was our bad luck," a dejected Goa skipper Mandar Rao Desai said.

After no goals separated the teams at the end of normal time, Bheke headed home as Goa were left to rue the red card Ahmed Jahouh picked up in the first half of extra-time. Their wait for the first ISL title continues.

Bengaluru came well prepared and threatened the Goa defence as early as the sixth minute. Nishu Kumar and Chhetri combined well on the left flank before the latter found Miku at the edge of the box. The Venezuelan striker shimmied his way past a crowd of defenders inside the box but an unsteady touch at the end of his spectacular solo run allowed goalkeeper Naveen Kumar to block his efforts.

Minutes later, Jahouh picked out Jackichand Singh's run down the right flank with a delightful diagonal as Goa countered from their own half. The Indian wingers delivered a brilliant cross to the far post where an onrushing Ferran Corominas skied his volley wide.

Bengaluru had the better of the early exchanges as the trio of Miku, Chhetri and Udanta Singh found joy in the attacking third.

But Goa were dealt a blow before the break as Mandar Rao Dessai, in an attempt to get to a through-ball by Edu Bedia, succumbed to a hamstring injury and had to be replaced by young Saviour Gama at left back.

After a sluggish start to the second half, FC Goa slowly took control of the game and started to dominate possession. They created chances at will and one such move saw Jackichand's effort from a tight angle go straight into the gloves of Gurpreet Singh.

A few minutes later, Jackichand found Jahouh at the edge of the box. The Moroccan midfielder's first-time shot, however, was saved by Gurpreet in goal. Cuadrat responded to Goa's growing influence by making an attacking change as Luisma replaced Alejandro Barrera.

The Blues went ever so close in the 81st minute when Chhetri's layoff inside the box was cleverly heeled into the path of Miku by Xisco Hernandez. The striker, with just the goalkeeper to beat, curled his strike onto the bar before seeing another strike blocked by Mourtada Fall in injury time.

The tempo slowed as the game moved onto extra time with both teams unwilling to take risks going forward. Bengaluru did, however, get their first shot on the target when Xisco found space and time on the ball to hit a piledriver from outside the box.

Goa were reduced to 10 men in the 105th minute when Ahmed Jahouh retaliated to a challenge by Miku. The midfielder picked up a second yellow and had to take the lonely walk back.

That turned out to be a game-changer as Bengaluru assumed control of the game. They got the precious goal they were looking for in the 116th minute. Dimas delivered a corner kick into the box for Bheke who produced a spectacular looping header that Naveen Kumar could only push on to the post and inside the goal as the Bengaluru supporters went into delirium.