Bayern Munich returned to winning ways in the Bundesliga as the prolific Robert Lewandowski scored twice in a 5-1 win over Cologne at the Allianz Arena. 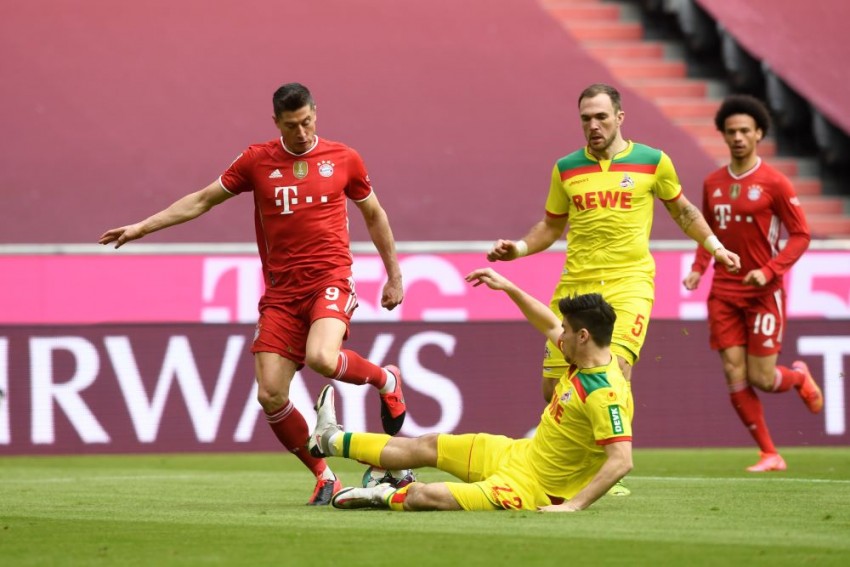 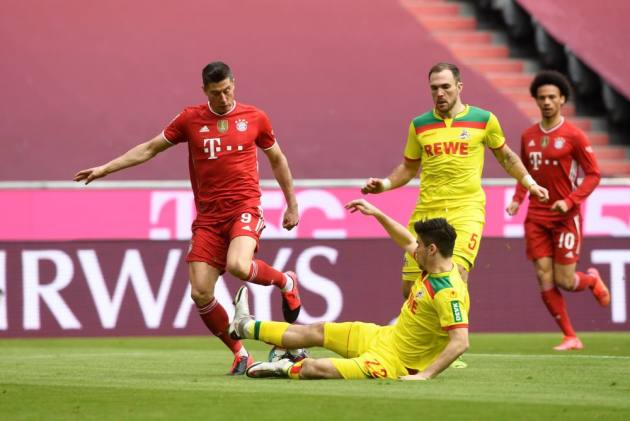 Bayern Munich returned to winning ways in the Bundesliga as Robert Lewandowski and Serge Gnabry both scored twice in a convincing 5-1 win over Cologne. (More Football News)

After returning to domestic duties following their Club World Cup success in Qatar with a home draw against Arminia Bielefeld, the reigning champions slipped to a 2-1 loss away at Eintracht Frankfurt last weekend.

However, a 4-1 thrashing of Lazio in Champions League action in midweek proved the catalyst for a first league triumph at their Allianz Arena home since January 30.

Lewandowski's first goal helped Bayern ease into a 2-0 half-time lead and while Cologne briefly threatened a comeback, the returning Thomas Muller made an immediate impression off the bench, providing the assist that allowed the competition's leading scorer to take his tally for the campaign to 28.

Like Muller, substitute Gnabry had an impact on his comeback, the Germany international tucking away a pair of routine finishes as the hosts eased clear in the closing stages.

Eric Maxim Choupo-Moting had opened the scoring with his first league goal for the club, heading in an inviting cross from Leon Goretzka, who then went on to set up his side's second before the break.

The midfielder waltzed his way beyond Rafael Czichos before laying the ball off as goalkeeper Timo Horn came towards him, allowing the ever-ready Lewandowski to roll it into the net.

Cologne failed to even muster an attempt as the first half proved to be one-way traffic, yet they were gifted a route back into the game when hesitation between centre-back pairing Jerome Boateng and David Alaba allowed Ellyes Skhiri in to produce a delicate lofted finish over the advancing Manuel Neuer.

The goal caused a brief wobble, yet the 64th-minute arrival of Muller - back after overcoming coronavirus - helped steady Bayern, the substitute teeing up Lewandowski to restore the two-goal cushion with a shot on the turn.

Dominick Drexler hit the post from a tight angle after robbing possession from Neuer before Gnabry's four-minute brace, the second of which was set up by the outstanding Goretzka with another delightful delivery into the area, added a touch of gloss to the final scoreline.

What does it mean? Bayern remain clear at the summit

Bayern's recent blip had allowed the chasing pack – led by RB Leipzig – to close the gap at the top of the table. Flick's side have already lost more Bundesliga games in 2021 (two) than they did across the entirety of the previous year.

This win is therefore most welcome in what has suddenly become a tighter-than-expected title race, but Flick – who made 44 appearances for Cologne during his playing career - will be concerned at the careless defensive lapse that allowed Skhiri to give the visitors a slither of hope.

Duo back to boost Bayern

While COVID-19 had kept Muller away, Gnabry had not featured since the Club World Cup final due to a thigh issue. The latter only had 13 touches during his goalscoring cameo, but the availability of the pair helps add further strength in depth, even if the fixture congestion eases in March.

Bayern had conceded 31 goals prior to this game, their highest tally through 22 league games in a campaign since 1991-92. The chance of a clean sheet disappeared when Boateng and Alaba dithered over who was going to attack a loose ball on the edge of the penalty area, in the end neither bothering to take control of the situation.

- This was the 100th competitive meeting between Bayern and Cologne. Bayern secured their 53rd victory in those 100 matches.

- Cologne have failed to win any of their last 14 Bundesliga meetings with Bayern (L13, D1). Only twice have they had a longer Bundesliga drought against a single opponent: 1997-2010 against Leverkusen (15 games) and 1991-2011 against Kaiserslautern (25 games).

- Cologne failed to have a single shot in the first half for the first time in a Bundesliga match since a game against Schalke in December 2014.

- Lewandowski scored his 27th and 28th Bundesliga goals this season – no player has scored as many goals after 23 matchdays in Germany as he has. This was his seventh Bundesliga match this season with two or more goals, which is a league high, ahead of Erling Haaland (6).

- Gnabry has scored nine Bundesliga goals against Cologne – more than against any other side in his career.

Bayern have a rare week between fixtures, giving them time to prepare for the visit of Borussia Dortmund next Saturday. Cologne, meanwhile, will be hosting Werder Bremen the following day.