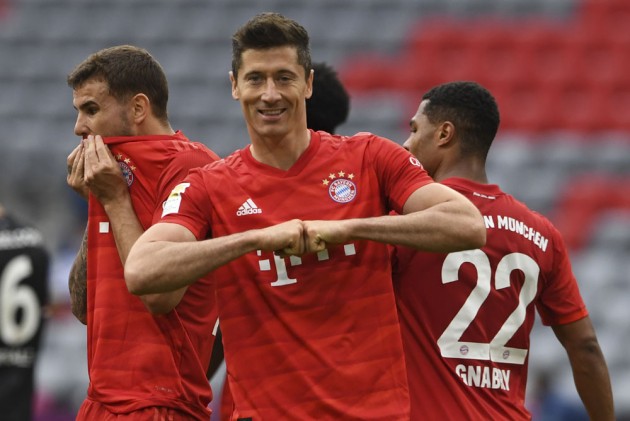 Bayern Munich faced little resistance as they stormed to a 5-0 victory over Fortuna Dusseldorf to go 10 points clear at the Bundesliga summit. (More Football News)

A 1-0 win against Borussia Dortmund – who play their game in hand against Paderborn on Sunday – last Tuesday gave Bayern a seven-point cushion at the top and they took another step towards an eighth straight title at the Allianz Arena on Saturday.

Mathias Jorgensen bundled a shot from Benjamin Pavard into his own goal in the 15th minute and the World Cup-winning right-back headed home a Joshua Kimmich corner before the half-hour mark.

Robert Lewandowski finished off a sweeping team move two minutes before half-time and added a second within five minutes of the restart, with Alphonso Davies completing the rout soon after.

Dusseldorf were unable to keep Bayern out for long. Thomas Muller's delivery to the back post was centred by Serge Gnabry with a brilliant first touch and Pavard's attempt was diverted into the net by Jorgensen.

Goalkeeper Florian Kastenmeier got down to his left to turn a volley from Muller behind, but he was unable to keep out Pavard's powerful header from the resulting corner in the 29th minute.

Bayern scored a brilliant third before half-time. Lewandowski's flick released Kimmich, who cut the ball back to Muller and he teed up the Poland striker to sweep into the net.

Lewandowski doubled his tally by instinctively using his trailing leg to steer Gnabry's driven cross home between the legs of Kastenmeier.

The onslaught continued when Davies dispossessed Kevin Stoger on the edge of the Dusseldorf box and slid a shot underneath Kastenmeier.

Andre Hoffman missed the target with a header and Niko Giesselmann was kept out by Manuel Neuer in rare chances for Dusseldorf, but they were able to stop Hansi Flick's side adding to the score as Die Roten continued what looks sure to be a march to glory.

What does it mean? Lewandowski completes the set

In his sixth Bundesliga game against Dusseldorf, Lewandowski finally scored his first goal in a meeting with them.

Although he was unable to complete his hat-trick from close range in the 70th minute, the prolific 31-year-old has now been on target against all 18 clubs playing in Germany's top flight this season.

It was another exemplary display from converted left-back Davies. He used his incredible pace to halt a counter-attack ahead of Bayern's opener and made a last-ditch block to deny Kenan Karaman a goal in the 33rd minute, before helping put the game beyond doubt early in the second half.

Jorgensen has a day to forget

Things got off to a bad start for the Denmark international with an own goal and he continued to be ran ragged at the back. He failed to track Lewandowski on his first, was not quick enough to get across to stop the striker getting a second and failed to prevent Davies barrelling through when Bayern got their fifth.

Bayern face a tricky trip to Bayer Leverkusen next Saturday, while Dusseldorf are at home to Hoffenheim on the same day.