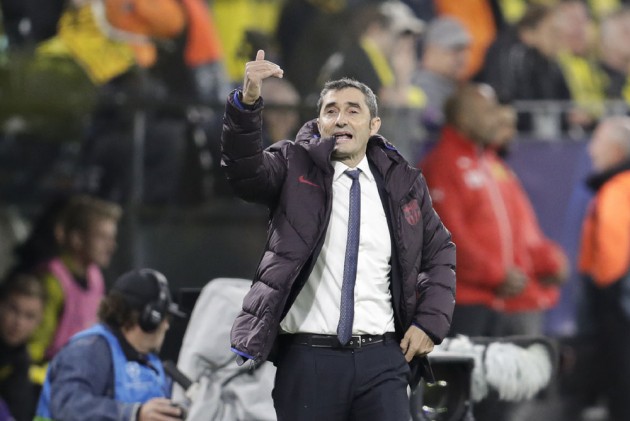 Ernesto Valverde understands the pressure is increasing at Barcelona following their shocking collapse against Levante, yet he is trying to remain calm as they aim to get back to winning ways against Sparta Prague. (More Football News)

Not for the first time in Valverde's reign, Barca let slip a promising position on Saturday, conceding three times in seven second-half minutes to suffer a 3-1 defeat in LaLiga.

While other results went Barca's way to keep them on top of the table, the nature of the loss raised questions over the future of the head coach.

Valverde insisted in the aftermath he had no intention of resigning and, speaking on Monday, the former Athletic Bilbao coach declared he aimed to "maintain a balance" in his job, despite the hysteria following the surprise result.

"It is clear that, when you lose, you have more tension," Valverde told the media ahead of Barca's midweek Champions League outing.

"We know what it means to lose. There is always a swell of pressure. We know that it is the case, and that is fine because it forces us to react.

"I know that the general tendency is to get off the table if we do well or sink if we lose. I try to maintain a balance.

"When we lose a game, I try to find the football reasons. At the beginning of the season, we were not well, especially away from home. Then we had a three-game winning streak.

"The other day [against Levante], when we had everything on track, we lost it in a minute. We have to ask ourselves why we have lost and the game situations that led to this [happening]."

Ernesto Valverde: "We started out poor away from home, we got back on track with three wins, and now we've lost again. We want to get back to the kinds of away wins from before Levante." #BarçaSlavia pic.twitter.com/V557luCURH

Valverde was also in charge when Barcelona failed to hang on to first-leg leads against Roma and Liverpool in their previous two campaigns in Europe, ending their hopes of Champions League glory.

Asked if the worrying slumps were a sign of a lack of leadership, he referenced their battling 2-1 home win over Inter when they rallied from a goal down to triumph at Camp Nou.

"Lack of leadership? You could have asked yourself that after coming back with Inter," Valverde replied.

"This team has come back in many games, also against Real Betis [when they trailed 1-0 but ending up winning 5-2 in LaLiga this season]. You can't always [come back], you just have to admit that and look at where we failed."

Luis Suarez was forced off in the first half of the Levante defeat with what the club later confirmed to be a right calf injury.

However, Valverde revealed that, while the Uruguayan striker is set to miss Tuesday's clash with Sparta, Suarez may recover in time to face Celta Vigo this weekend.

"It's not an important injury like last time," he said. "Tomorrow is very unlikely. Next week? I wouldn't like to say."