Rafael Nadal was able to ease through to the third round of the Australian Open on Thursday, thanks in part to the help of YouTube. 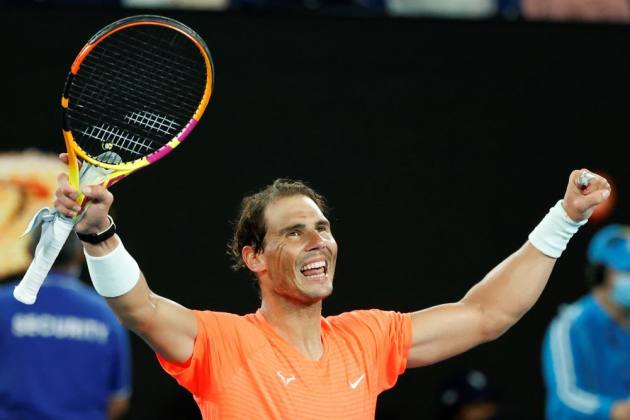 Rafael Nadal was able to ease through to the third round of the Australian Open on Thursday, thanks in part to the help of YouTube. (More Sports News)

The Spaniard looked in impressive form as he swept aside Michael Mmoh 6-1 6-4 6-2 in the evening session at Melbourne Park, with perhaps the biggest hinderance for Nadal caused by a rowdy spectator who was eventually escorted out of Rod Laver Arena.

Having come through qualifying, Mmoh had rallied to stun Viktor Troicki in the opening round. However, he never threatened a stunning upset of the 2009 champion, who will next face Cameron Norrie.

Meanwhile, Daniil Medvedev marked his birthday with a routine win of his own, the in-form Russian stretching his unbeaten run to 16 matches to suggest he is a serious contender for the title.

Stefanos Tsitsipas found life a little tougher in his outing but while the Greek survived the scare to move on in the main draw, fellow seeds Borna Coric and Lorenzo Sonego were knocked out.

NO VIDEO NASTY FOR NADAL

Ever the consummate professional, Nadal revealed he did his research online to find out more about second-round foe Mmoh, who had to get through three qualifying rounds just to make the main draw.

The world number 177 managed more aces than the 2009 champion but failed to create a break-point opportunity in a contest that lasted one hour and 47 minutes. Like the fan who disturbed play by shouting and making gestures towards Nadal as he served for the second set, Mmoh perhaps knew he was heading for the exit.

"I always have a lot of respect for every opponent. Yesterday, I was watching some videos of him on YouTube, trying to know a little bit more about him," Nadal said in his on-court interview after the match.

"Every day when you go onto the court, anything can happen - you can win, you can lose. You need to be ready to accept both things."

Norrie is next for the 34-year-old, the Briton defeating qualifier Roman Safiullin in four sets.

NO TIME TO CELEBRATE FOR MEDVEDEV

While Roberto Carballes Baena offered some resistance in the second set, Medvedev provided a further demonstration of his obvious talent with a 6-2 7-5 6-1 thrashing of the Spaniard.

The fourth seed from Russia was on court for one hour and 44 minutes but insisted afterwards his focus will now switch to his next opponent - Filip Krajinovic - rather than celebrating turning 25.

"There's no time to celebrate my birthday in a tournament. I got presents from my wife, but I'll soon look to my next match," he said. "If I'd have lost, I probably would go and celebrate, but I won so I can't now."

Krajinovic defeated Pablo Andujar 6-2 5-7 6-1 6-4 to progress. He was triumphant in the only previous meeting with Medvedev on the ATP Tour, winning in straight sets when they went up against each other at Indian Wells in 2019.

It's a win for the birthday boy @DaniilMedwed is flying into the #AusOpen 3R with a 6-2, 7-5, 6-1 victory over Carballes Baena.pic.twitter.com/wjiw3efvu6

Tsitsipas - who reached his maiden grand slam semi-final at the Australian Open two years ago - rallied from a set down to eventually see off Kokkinakis after four hours and 32 minutes.

Local hope Kokkinakis was playing his first major since the 2019 US Open and threatened a huge upset against the fifth seed.

"Great match towards the very end, and I fought like a lion," said Tsitsipas, who next meets Mikael Ymer. "I fought like a real warrior out there, and it was an amazing ending with lots of emotion and great spirits."

Fabio Fognini was involved in a thrilling five-setter against Salvatore Caruso, which ended with the pair engaging in a tense verbal exchange that led to security intervening.