Jasprit Bumrah, who was rested for first Australia vs India T20I match, handed the cap to Thangarasu Natarajan 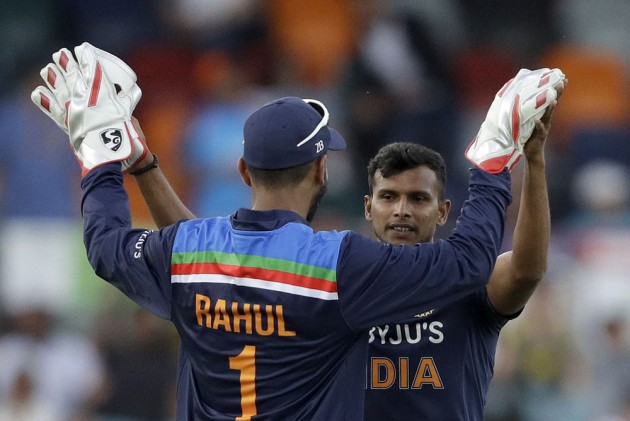 India handed Thangarasu Natarajan back-to-back debuts as the visitors take on Australia in the first of three T20Is at Manuka Oval, Canberra on Friday.

Natarajan, 29, made his international debut during the third and final ODI at the same venue on Wednesday.

While announcing India's playing XI at the toss, captain Virat Kohli praised Natarajan saying, he "looked composed in the third ODI. There was a reason I went to him."

Jasprit Bumrah, who was rested, handed the cap to Natarajan. Watch the moment HERE.

Natarajan on Thursday described his India debut as a "surreal experience" and said he was looking forward to represent the country in more such matches in future.

The right-arm pacer from Tamil Nadu made a memorable debut for India in the third ODI, snapping two wickets as Kohli and his men notched up a morale-lifting 13-run triumph.

"It was a surreal experience to represent the country. Thanks to everyone for your wishes," Natarajan wrote on his twitter handle.

Natarajan had taken two for 70, claiming the wickets of Marnus Labuschagne and Aston Agar after India posted 302.

Picked for India's T20 squad, Nataranjan was called up to the ODI setup as a backup for Navdeep Saini, who had complained of back spasms before the series started and went for runs in the first two ODIs.

Known for his ability to bowl yorkers, Natarajan played a pivotal role in taking Sunrisers Hyderabad to the knockout stages of this year''s IPL in the UAE, taking 16 wickets.