India has so far won four medals in the championships, after Sunil Kumar's historic gold in 87kg and Arjun Halakurki's bronze in 55kg Greco-Roman category on Tuesday. 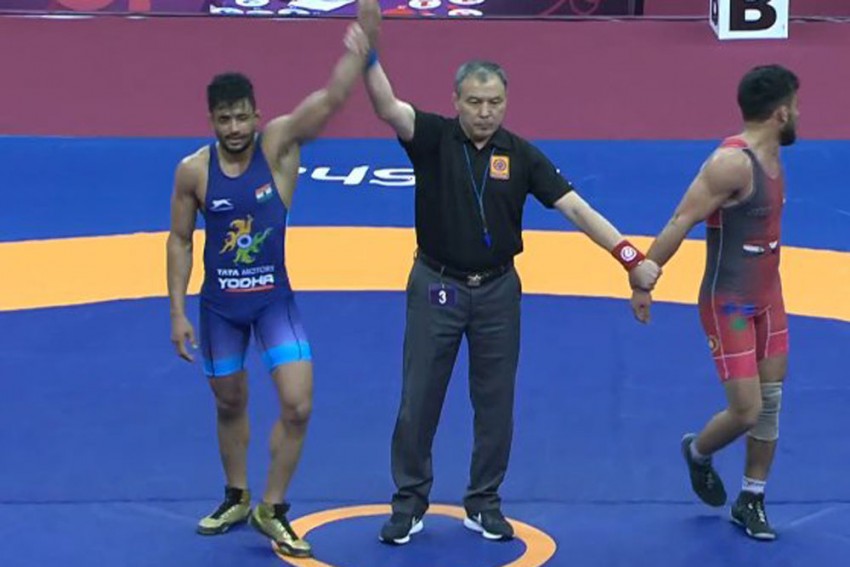 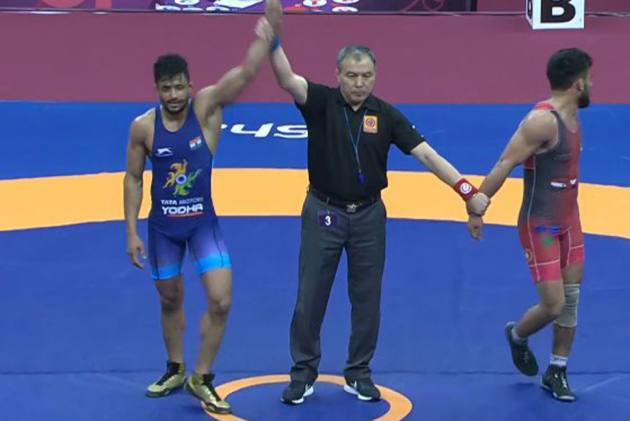 Ashu, Aditya Kundu and Hardeep won a bronze medal each in their respective weight categories as Indian wrestlers bagged five medals in Greco-Roman events of the Asian Wrestling Championships, on Wednesday.

While Ashu won a bronze in in 67kg category, Aditya and Hardeep also bagged the medals of same colour in the 72kg and 97kg respectively on the second day of the competitions.

Ashu beat Syria's Abdulkarim Mohammad Al-Hasan 8-1 while Kundu defeated Nao Kusaka of Japan 8-0 inside one and a half minutes in a lop-sided 72kg bronze medal bout at KD Jadhav Hall in Indira Gandhi Indoor Stadium.

India has so far five medals in the championships, after Sunil Kumar's historic gold in 87kg and Arjun Halakurki's bronze in 55kg Greco-Roman category on Tuesday.

Gyanender, however, lost 0-6 in the 60kg Greco-Roman bronze medal bout on Wednesday. The gold was won by Kenichiro Fumita of Japan, who beat Kyrgyzstan's Zholaman Sharshenkov 4-0.

The other bronze in 60kg was won by Mehdi Seifollah Mohsen Nejad who beat Kazakhstan's Aidos Sultangali 4-3.

The other bronze in the 67kg category was won by Iran's Hossein Nasrollah Assadi Kolmati, who beat Japan's Tsuchika Shimoyamada 5-3, while the gold medal went to Korea's Hansu Ryu, who defeated Uzbekistan's Makhmud Bakhshilloev 4-1.

In the 72kg category, besides Aditya, Ruslan Tsare of Kyrgyzstan won another bronze, beating Chinese Taipe's Yan Kai Chen 8-0. The gold in this weight division was won by Amin Yavar Kaviyaninejad of Iran with a 8-0 win over Ibragim Magomadoc of Kazakhstan.

In the 97kg weight division, Uzbekistan's Muhammadali Shamsiddinov got the better of Thailand's Ponlawat Saimmai inside 20 seconds to win the other bronze with a 4-0 scoreline. The gold in this category was bagged by Mohammadhadi Abdollah Saravi of Iran, who defeated Seyeol Lee of Korea.

Ashu's victory over Muhammad Alhasan was redemption of the loss that he faced in the semi-final, which he lost against the Uzbek Makhmud Bakhshilloev due to a technical win awarded to the latter.

"It feels great to earn a Bronze medal in my first-ever senior championship. I lost my semi-final bout as I invested a lot of time on attacking, which I worked upon in this bout with more emphasis on defence. I am happy that things panned out as planned," said an elated Ashu after his win.

On the other hand, this was Aditya's first Asian Championship and his second ever international tournament.

Aditya who will now focus on his Olympics qualification will aim to reduce his weight to 67kg to be able to compete at the Tokyo Olympics later this year.

"It feels good to have won the bronze medal. I lost out on my gold medal match but I am happy I could play as per my strategy in this game and win the bout," he said.

Hardeep, who clinched India's third and final bronze medal of the day, said he will keep on working on ground technique.

"I was worried at one point when I was supposed to be on the ground as it is a weakness that I have been working upon. In the end, I was able to maintain my cool and hold the opponent off with a strong defensive strategy," he said.