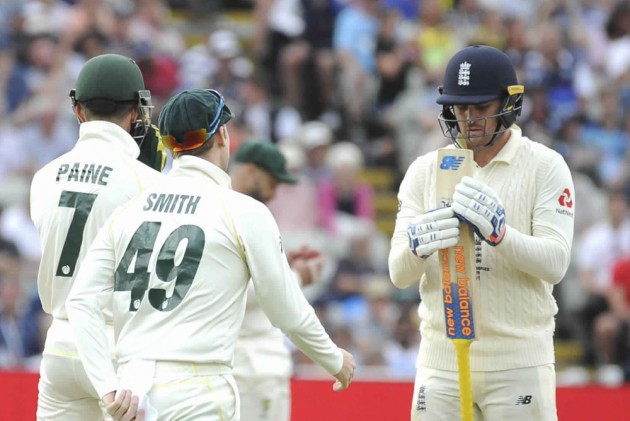 Steve Smith and Matthew Wade made sensational centuries as Australia took charge on the fourth day of the first Ashes Test and left England toiling at Edgbaston on Sunday.

Former skipper Smith was once again the scourge of England with his sublime 142 seeing him become just the third Australian to make centuries in each innings of an away Ashes Test.

Stands of 130 and 126 with Travis Head (51) and Wade (110) saw Australia completely turn the tide of an enthralling opening contest, which England now can only realistically hope to draw.

The brilliance of Smith, who played with the ease of a man practicing in the nets, and Wade – who ended a wait for a Test century dating back to January 2013 – means an away win and an 18-year wait for an Australia victory at Edgbaston in any format is the likeliest outcome unless weather intervenes.

Australia declared on 487-7 to leave England, who were 13-0 at stumps, chasing a near-impossible 398 for victory and facing the daunting prospect of batting out a full day against the spin of Nathan Lyon on a deteriorating pitch.

Centuries in both innings of the match, take a bow Steve Smith!

A stunning return to the longest form from the Australian.#Ashes pic.twitter.com/vVXlPEVtsl

Stuart Broad saw a couple of leg-before appeals against Head turned down and Smith found a gap in the field with a sliced, aerial cover drive on a morning of frustration for England.

Some hard running brought up their century stand, but Head's edge off Ben Stokes drew a sharp low catch from Jonny Bairstow.

Still, Smith plugged away like the proverbial immovable object and, having reached lunch on 98, quickly found the two runs he needed to bring up his century.

A couple of neat drives off the out-of-sorts Moeen Ali for boundaries preceded a desperate and woeful review against Smith on 125, with DRS showing the delivery was clearly doing too much.

Wade quietly punched his way to 50 off 70 balls before England finally made the crucial breakthrough by removing Smith, who clipped Chris Woakes behind with an attempted drive against the new ball.

It did little to stem the tide as Wade brought up three figures in the final session with a fine reverse sweep off the middle of the bat.

A pull straight to deep-backward square off Stokes finally ended Wade's knock and Tim Paine (34) - who passed 1,000 Test runs - was bowled through the gate by Moeen.

Rory Burns and Jason Roy valiantly batted out the remaining seven overs in fading light, but a huge effort will be required if England are to avoid defeat in Birmingham.

How different things could be for England. Australia were 122-8 in the first innings before Smith's first century led the recovery. A first-innings lead of 90 may have been enough had it not been again for Smith's excellence, with Wade's knock also helping to hand the initiative to the visitors.

Wade's place in the Test side was questioned before the match and a score of one in the first innings did little to silence his doubters. But boy did Wade, who earned his spot by making 1021 runs in the 2018-19 Sheffield Shield, justify his place. With England so focused on Smith, Wade nonchalantly built his way to a three-figure score that was every bit as important as Smith's century.

Smith could hardly have dreamed of a better return to the Test arena following his part in the ball-tampering scandal that rocked cricket. The incident will forever leave a stain on his legacy, but without his brilliance, Australia would not be in this position. His century was reached with an exquisite lash through the covers off Broad, leading to a raise of the bat and an ear-to-ear grin.