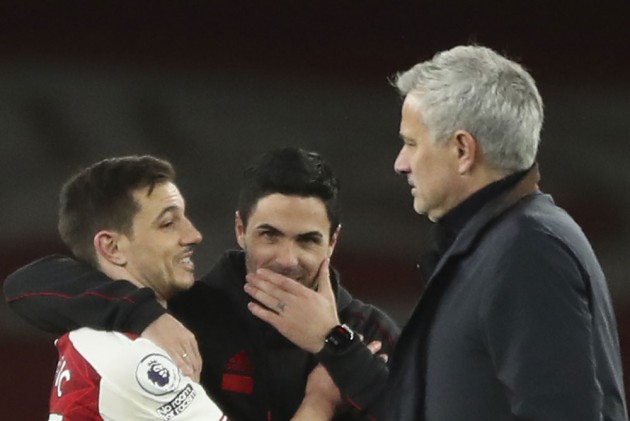 Arsenal's preparations for the game were by no means ideal as Mikel Arteta revealed pre-match that captain Pierre-Emerick Aubameyang had been dropped for disciplinary reasons, reportedly relating to tardiness, but the Gunners were the better side from start to finish and deserved the points.

It looked like being a grating day for them after seeing Emile Smith Rowe and Cedric Soares denied by the woodwork either side of Lamela's quite remarkable breakthrough goal.

But Martin Odegaard restored parity on the stroke of half-time and Lacazette completed the turnaround from the spot in the second period to move Arsenal back to within four points of their seventh-placed rivals, with Lamela's dismissal 14 minutes from time hampering Tottenham in their late rally.

20 - Alexandre Lacazette's penalty was the 20th to be scored in a Premier League north London derby, with this fixture now having the most goals scored from the spot in the competition. Drama. pic.twitter.com/lFSFXVqT9k

Spurs struggled to get out of their own half during the early exchanges and were fortunate to remain on level terms when Smith Rowe's dipping 25-yard strike hit the crossbar, while they lost Son Heung-min to injury soon after.

But Tottenham finally showed some attacking intent just past the half-hour mark and it led to their remarkable opener, Lucas Moura teeing up Lamela – Son's replacement – to produce a 'rabona' finish that went through Thomas Partey's legs and found the bottom-right corner.

Arsenal's frustration amped up as Cedric was the next Gunner to be denied by the frame of the goal, but a deserved equaliser did arrive just before the break when Odegaard turned in Kieran Tierney's cross with the aid of a deflection.

The hosts continued to control proceedings but had been struggling to break Spurs down before winning their penalty just after the hour – Davinson Sanchez clumsily fouling Lacazette after the Frenchman had unsuccessfully swiped at the bouncing ball.

Lacazette coolly converted the resulting spot-kick and Spurs' hopes suffered a major blow when Lamela caught Tierney in the face with a stray arm to earn him a second yellow card.

Late scares saw a Harry Kane header ruled out for offside and the same man hit the base of the post from a free-kick, but Arsenal held on to end their five-match winless run in the derby. 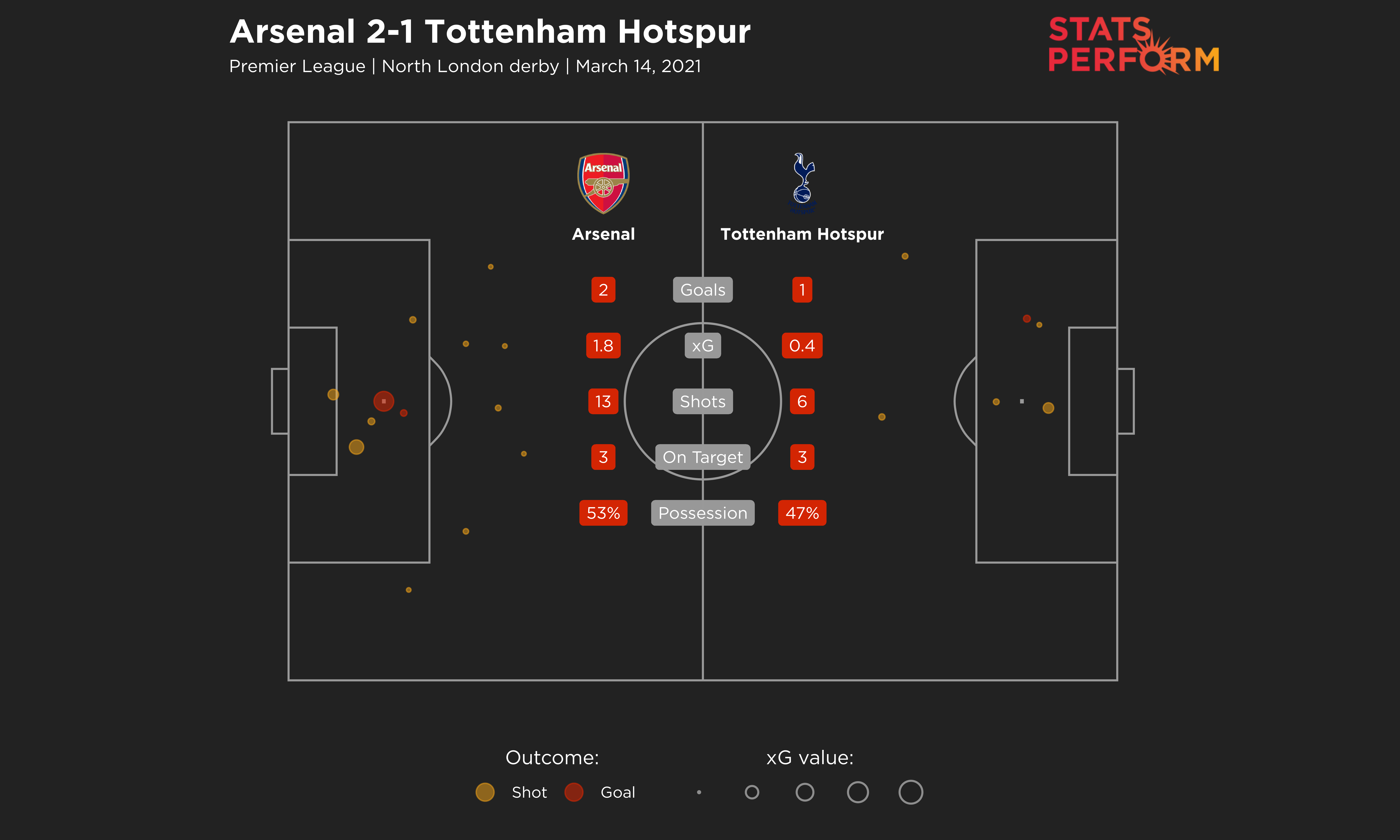 Failure to win this match would have meant the Gunners had not won any of the past six north London derbies, a new historic low in the fixture.

But Arteta's men were the better team by a distance, having more than twice as many shots (13) as Spurs (six) and playing the more fluid football.

It was a big call by Arteta to leave Aubameyang out, but it reflects well on him having still presided over a victory. This may not have been a classic, but it does boost Arsenal's own European hopes while leaving Spurs six points adrift of the top four.

45 - Spurs have dropped 45 points from winning positions against Arsenal in the Premier League, the most of any team against a specific opponent in the competition. Spursy. pic.twitter.com/oox4iuErKx

There were several players who stood out for the Gunners, but it is difficult to look past Smith Rowe as the most impressive. The young midfielder's four key passes were twice as many as anyone else on the pitch and made him the youngest player to achieve that feat in the derby since Cesc Fabregas (six) in April 2007.

Bale and Kane fail to deliver the goods

Prior to Gareth Bale's withdrawal just before the hour, he failed to have a single shot or play a key pass. He was largely anonymous and kept under wraps by Tierney, while Kane was not much more effective until the latter stages, likely leaving Spurs fans wondering why it took him so long to make himself known. He had just one touch in the penalty area. You expect more from this fixture's leading goalscorer. 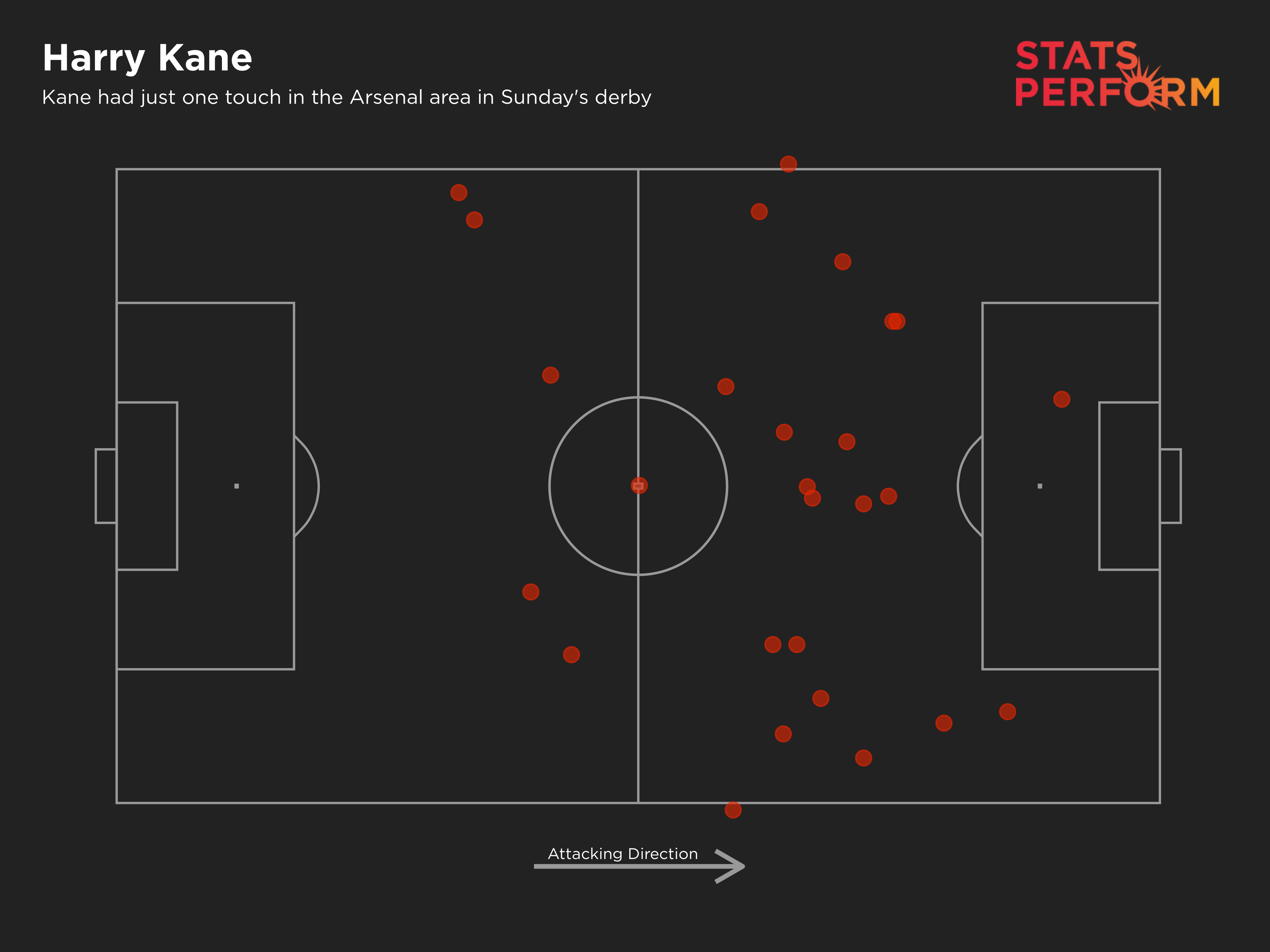 - Arsenal are unbeaten in their past 10 Premier League home games against Spurs (W6 D4), while Mikel Arteta is the third consecutive Gunners boss to win his first home league meeting with Spurs, following Arsene Wenger and Unai Emery.
- Spurs have dropped 45 points from winning positions against Arsenal in the Premier League, the most of any team against a specific opponent in the competition.
- Since losing his first London derby at Emirates Stadium in the Premier League (2-1 v Chelsea in December 2019), Arteta is unbeaten in his past five such games, picking up four victories (D1).
- Alexandre Lacazette is the first Arsenal player to score in three consecutive home league games against Spurs since Emmanuel Adebayor in October 2008.
- Erik Lamela became just the fifth substitute in Premier League history to score and be sent off in the same game, after David Lee (1993), Bobby Zamora (2007), Ivan Klasnic (2010) and Hal Robson-Kanu (2017).

Arsenal are at home again on Thursday as they host Olympiacos in their Europa League last-16 second leg, having won the away leg 3-1. Spurs are also in European action the same day, as they go to Dinamo Zagreb 2-0 up from their first meeting.