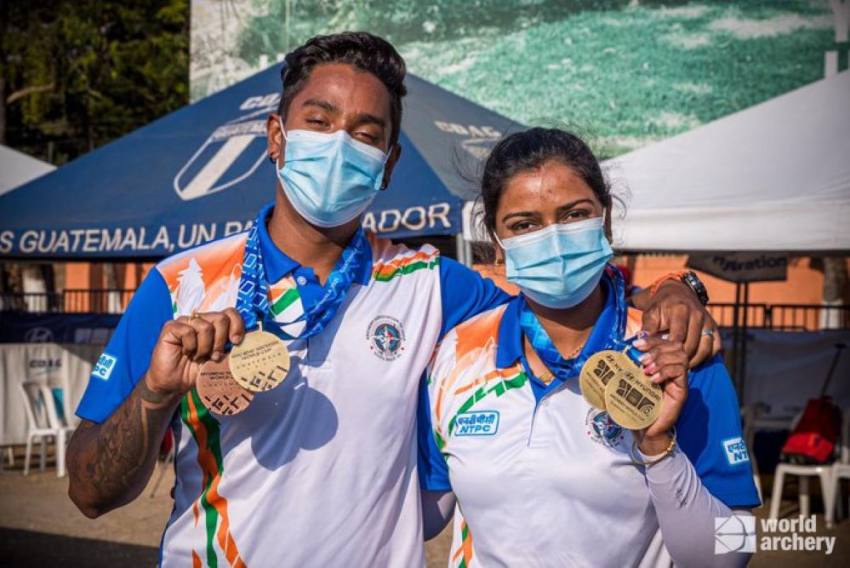 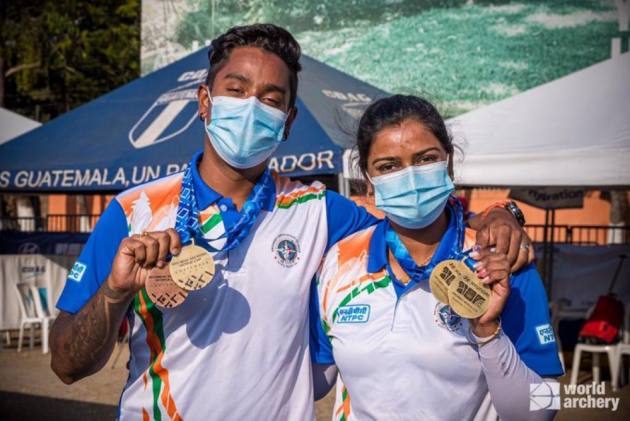 "We travel together, train together, compete together and win together,” Das, who got married to Deepika in June 2020 after a two-year courtship, said after claiming the gold medal on Sunday. "She knows what I like, and I know what she likes."

This was India's recurve archers’ best ever World Cup finish with two individual and one team gold medals in their return to the top International calendar year event after almost two years.

Also, this was India's best-ever individual recurve men’s result since Jayanta Talukdar triumphed in Croatia way back in 2009.

India started off with the women's team of Deepika, Ankita Bhakat and Komalika Bari winning a first team gold after seven years when they scripted a stunning turnaround to down fancied Mexico 5-4 (27-26) in an intriguing shoot-off.

The performance rubbed off on the mixed pair duo of Das and Ankita Bhakat as they bagged a mixed pair bronze, upsetting topseed USA 6-2 with yet another fightback at the Sports Complex Los Arcos here.

But the real icing on the cake came in the individual events later in the day when country's top archery couple 'Dee-Das' bagged two individual golds in their respective events.

Former world number one Deepika, who was seeded third, produced yet another calm finish in an intense shoot-off to edge out USA's eighth seed Mackenzie Brown 6-5 (9*-9) by hitting closer to the centre. In the semi-final she had defeated her Mexican rival Alejandra Valencia 7-3.

This was Deepika's third career stage win and first since Salt Lake City 2018.

World number six Deepika was 3-1 up after two sets but saw that lead vanish after Brown evened the match with a 29 in the third and a 28 in the fourth.

The two-time Olympian, however, held her ground in the fifth, shooting a 29 and displaying the kind of resilience she’s oft been accused of lacking.

“The most difficult part was the heart-beating sound, which made me really nervous,” the world number six said, mimicking a heartbeat for emphasis.

Deepika shot first and shot a nine, about one centimetre out of the 10-ring to the right. Brown’s arrow went left -- and further out in the nine than Deepika’s.

That single arrow added a second gold on the day to complement the recurve women’s team gold India won over Mexico.

"It’s been a long time since I shot in the finals,” she said. “It feels great and, at the same time, I’m happy and nervous. It gives me confidence and pushes me to give better performances.”

But the best show came from her husband Das when he outclassed Spanish World Cup debutant Daniel Castro 6-4 to claim his maiden individual World Cup medal.

Das' previous best in the individual section has been a fourth place finish in Antalya-2016 where he lost to Kim Woojin in the bronze playoff.

He had one wild set of 26 points in his semi-final win Mexican Angel Alvarado, who won mixed team gold this morning, but otherwise shot sets of 28, 29 and a closing excellent 30 points in a four-set victory.

Trailing after three sets in the final against Castro, Das flicked a switch.

He closed with a 29 and a 30 -- shooting his last 10 before his opponent had finished, putting the match out of reach and sealed the issue with a punch in the air.

"It feels amazing. It’s like dreams are coming true. I have worked for so many years and now this is paying off. This is my first title and I’m very happy,” Das said.

On his perfect last set to take gold, he said, “I just gave my best and was present. I didn’t think about the future or the past, just present.”

"It’s beautiful. It’s a big boost for me ahead of the Olympics. I'm working in the right way," Das, who will be shooting in his second Olympics at Tokyo, signed off with a big smile.