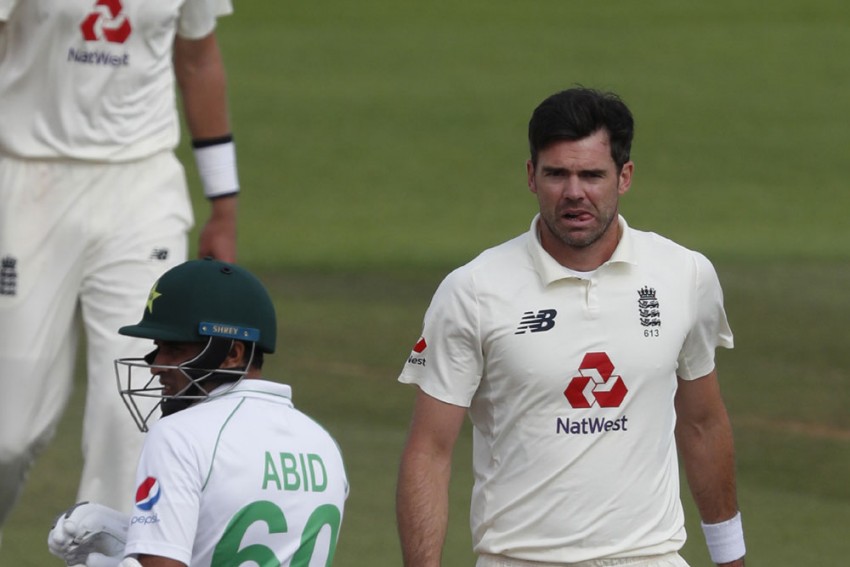 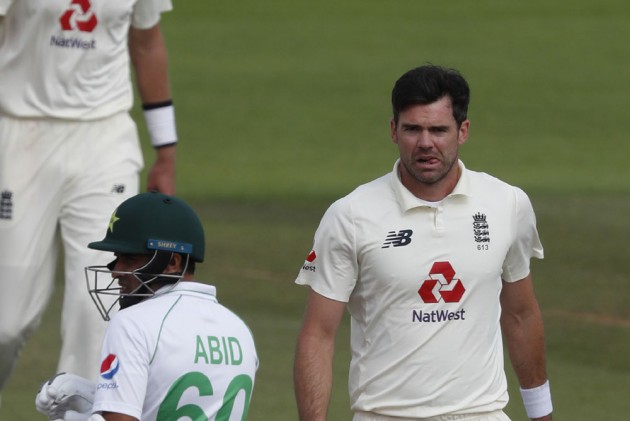 James Anderson was left tantalisingly on the brink of history with 599 Test wickets when bad light halted play after Pakistan frustrated England on a rain-affected fourth day of the final Test. (More Cricket News)

Anderson needed two wickets on the penultimate day to become the first fast bowler to take 600 scalps in the longest format, but could only dismiss Abid Ali for a patient 42.

Jos Buttler became the fourth player to drop a catch off Anderson's bowling in the final match of the series and Pakistan produced a strong rearguard action to close on 100-2 - trailing by 210 runs - as they battled to salvage a draw.

READ: Anderson Is The GOAT Of England Bowling - Bess

Stuart Broad (1-23) dismissed Shan Masood, who was given that early life by Buttler, but England could only strike twice in the 56 overs that were possible on a flat pitch at the Rose Bowl.

England will end a 10-year wait for a Test series win over Pakistan on the final day as they lead 1-0, but there are major doubts over whether there will be any play as Storm Francis is heading for Southampton.

With uncertainty over when England's next Test will be, Anderson could face a long wait for his next chance to become only the fourth player to join the 600 club.

Ollie Pope left the field early in the day and did not return after the tourists resumed at the start of their second innings with a deficit of 304.

Anderson (1-18) suffered more frustration when Buttler failed to grasp a chance offered by Masood on three and Pakistan's openers dug in with defiance before an early lunch was taken due to heavy rain at 41 without loss.

Abid and Masood (18) continued to dig in after play restarted following a lengthy spell off the field, but a stand of 49 ended when the left-hander fell lbw offering no shot to Broad.

Captain Azhar Ali, who made a magnificent unbeaten century on day three, and Abid saw out another 26 overs as England appeared to run out of ideas before Anderson moved a step closed to 600.

Abid was the man to depart, trapped in front to leave Pakistan 88-2 but Anderson was soon taken out of the attack in fading light and the players were taken off with the seamer reflecting on what might have been.

England's leading Test wicket-taker Anderson had the Monday blues after Buttler became the latest player to spurn a chance to help him reach the 600-mark.

Rory Burns, Zak Crawley and Broad spilled catches on day three and Anderson was left shaking his head after wicketkeeper Buttler missed a straightforward opportunity to see the back of Masood.

The four drops came in the space of 37 balls from Anderson, who will be hoping some calm after the storm gives him another chance to make history on the last day of England's final Test of the summer.

Pakistan started the penultimate day facing a real challenge to avoid a heavy defeat, but their batsmen showed impressive discipline in a match England have dominated.

Abid fell for only one in the first innings after making a half-century in the second Test, but soaked up 162 balls before he eventually fell to Anderson.

Masood and skipper Azhar, with a spring his step after a brilliant knock on Sunday, also showed commendable resilience on a day of Test cricket that will not live long in the memory but really should have done.