Sarah Palin is condemned by some Western feminists, but she is also a product of some of its most restrictive visions. It is time for lessons to be learned--from outside the West. 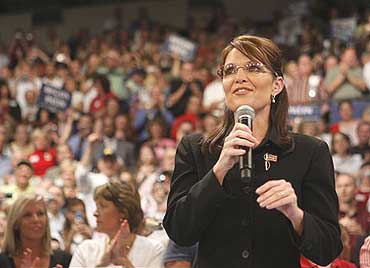 Some feminists lament the glossy rise of Sarah Palin, others rush with sisterly ostentation to defend her from sexism even as they repudiate her politics. While plenty of typeface has been expended on analysing her obvious and myriad failings as a serious politician, what mainstream feminism and the US women's movement have yet to do is to own her or, rather, to own up to her.

A certain brand of corporate feminism, one that has long dominated the public sphere in the western world, now finds itself trapped in the jaws of a self-proclaimed pitbull. For while the woman who has galvanised the American right and who champions its most retrograde values may be a feminist nightmare, she was also conjured up by the monochrome dreams of its most prominent strands. Sarah Palin, hockey mom and career woman, is the disastrous product of single-issue feminism.

There's little pleasure to be had from saying this, and yet facing up to this unpleasant truth is essential if the debate on gender and politics is to ever move beyond the impasse in which it finds itself. Sarah Palin is less an anti-feminist disaster than a triumph of corporate feminism in the US and elsewhere. With its emphasis on power and privilege, this feminism, rather than questioning the world we live in, has insisted on participating fully in almost every one of its hierarchies. It has sought to sup at the table rather than change the menu and ensure that everyone is fed.

In its worldview, "women" are a generic category and the clear winners of an oppression sweepstake for which amends must be made to already privileged women at the expense of everything else. It's a position exemplified by Gloria Steinem's support for Hillary on the basis that "gender is probably the most restricting force in American life today". Gender has indeed been a greatly restrictive category and nowhere more so than within this brand of feminism. With its narrow emphasis on biological womanhood to the exclusion of other factors, this feminism has persistently refused to recognise the ways in which gender necessarily intersects with other forces like ethnicity, race, class and sexuality to produce a range of different positions from which women relate to the world.

As such, Sarah Palin is less a scourge than a lesson. She – and her rapidly growing support base – has finally laid bare the category "woman" as deployed by the media and prominent American feminists: all along it has actually meant "white woman". (The same voices that so loudly defend Palin against sexism were not so voluble when Michelle Obama was subjected to far more vicious pillorying on the basis of her race and gender.) Palin's rise has also made clear that, while it is perfectly acceptable on right and left to stress gender and gender equality, talking about race is still verboten.

Any discussion of race or racism must be suppressed, as it has been by Obama, for fear of being seen as "grievance". Gender, however, can be trotted out as evidence of both restriction and accomplishment. As was evident during the Hillary-Obama contest, race and gender are also falsely defined as entirely separate in their operation. Do we really think that the now legendary 18 million cracks in the glass ceiling credited to Hillary will work in favour of all women, regardless of race and class? Is it cynical or realistic to think that it's going to take a lot more work for both the white single "welfare mom" from Kansas and the married black grandmother from Virginia to break through it?

Palin's paltry knowledge of the world beyond her own is no exception. It is a weakness she shares with the mainstream women's movement in the US. While Anglo-American feminism has tended to see women in Asia and Latin America as requiring emancipation to its own exalted standards, even a basic awareness of women's movements in other parts of the world would reveal that the most powerful kinds of women's activism have never been about gender alone.

From landlessness, resources, reproductive rights and the environment to wages, war and imperialism, women's movements in places such as Chile, Indonesia, Nigeria, India and Venezuela have had to develop a complex understanding of the issues (in the plural) at stake. When economic justice, peace, the environment, health and reproductive rights are all seen as equally integral to the wellbeing of women and their fellow human beings, there is no question of women defending a retrograde and dangerous politician merely because she also happens to be biologically female.

To be feminist is not simply to want to be a woman with power, but to be transformed by the most urgent issues of our time. Until that lesson is absorbed by women's movements in the US and elsewhere, our backs will be bridges for the Palins of the world - even as their spiked heels grind contemptuously into our spines.

This was first published by the Guardian

The Price Of Free Speech