Sachin has kept his batting simple. Good balance, trying to hit everything as straight as possible and showing the blade of the bat while executing shots have been the cornerstones of his success. 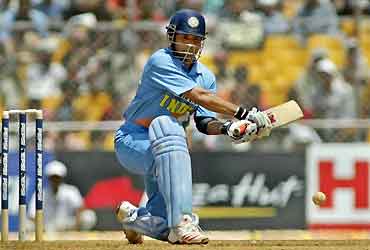 I always found that when I played against great batsmen of the modern era, I often ended up getting sucked into the emotion of the occasion. Everyone comes to watch Brian Lara, Sachin Tendulkar, Ricky Ponting or Jacques Kallis bat and the rest of us just make up the numbers.

Great as it is for the spectators to watch these players bat, the prime objective of any opposition is to get these batsmen in early so that you can make it as difficult as possible for them and hopefully send them to the showers before they get going.

If this does not happen, one could very easily become just another spectator as the great batsmen become the "stars of the show" and the fielding side becomes ball boys, running to and from the boundary all day long. Sachin Tendulkar is one of those players.

I used to find it fascinating, when playing in India, how some people actually ended up leaving the stadium the moment Sachin got out. They had come for the sole reason to see their hero in action and if he was out, watching the rest of us wasn't quite as exciting (and rightly so!!)

As Sachin gets set to become the most capped player in ODI history, I have no doubt the little man has it in him to reach perhaps the 500-match milestone.

As a fielder with supposedly the best seat in the house, one lived in the fear of dropping a simple catch with Tendulkar on 15 and he goes on to make 235. This happened to me in an unofficial Test match in South Africa (I think 2002 or 2003) when I dropped him in what can only be described as one of the easiest catches of all time. Thank goodness he only got 45 and my embarrassing moment was watered down a little.

A player like Sachin, if he gets going, there is actually very little one can do. He is running today's show and please hurry up and bowl the next ball so that he can send it on its way to the boundary.

This happened on more than one occasion while I was playing and if the bowling side fell into this negative trap, they were  guaranteed to spend a day-and-half in the field.

As with any of the greats, Sachin's positive play can also provide an opportunity and one needs to be ready to grab it. It will more likely be a half chance and if not taken, will inevitably lead to the most famous two words in cricket - "if only..."

Watching him bat from mid-off or mid-on, I would often end up saying to myself "He hits the ball hard for a little guy." Invariably, I would be spending a lot of time diving to my right or left as he unleashed another powerful straight drive which always seemed to be just out of reach.

As with all great batsmen, putting a plan together to try and get him out was often a futile exercise as he had no perceived weaknesses. This was especially evident in India, where the lack of bounce and 60,000 Mumbai supporters spelt real danger and a long time in the field.

I got a sense he has kept it as simple as possible with his batting. Good balance, trying to hit everything as straight as possible and showing the blade of the bat while executing shots have been the cornerstones of his success.

Mentally, I believe he has one of the strongest minds in the game. To go out and bat day in and day out with the massive expectations of a nation and to be able to perform as consistently as he has is a remarkable achievement.

I remember reading an article on him a few years ago when he spoke about the importance of every innings he played and how disappointed he felt when he did not perform. One always got the sense that when he walked out to bat he was mentally in tune and was going to give 100 per cent for India on that day.

Although I did not get to know him that well, he has always come across as a thoroughly decent human being. I get the impression that he is a humble man who does not take success for granted and is a great ambassador and role model for the game of cricket. He has a huge amount to offer this great game and I sincerely hope he gets involved in some way once his playing days are over.

For now, as much as I enjoy watching him bat, I hope he will save some of his best performances for the next series against who, I'm not sure! A historic one-day series win for the Proteas in India will be something I would enjoy just a little more.