Should India Give Up Ahmedabad?

As a Test venue, that is, in keeping with Pakistan's request that it be not kept as a venue for a Test match during the forthcoming tour? Mr Narendra Modi as already made it into a poll issue in Jharkhand, though the BCCI is hopeful... 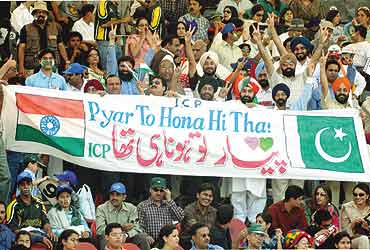 Pakistan first cited "political reasons" in asking for a change from Ahmedabad as a venue for the second Test match in the forthcoming tour and then in a volte face said that it was for security reasons that they were asking for a change. Presumably there weren't other issues for the polls in Jharkhand which is perhaps why Mr Narendra Modi decided to challenge "Mian Musharraf" once again and made it into an election speech. The BCCI has already taken the matter to the MEA, though BCCI Vice-President Rajiv Shukla has conveyed that he is hopeful that Pakistan would play in Ahmedabad. What do you think the Indian approach be as the hosts, particularly after the warm reception given to the Indian cricket team in Pakistan?

The story so far:

Feb 8: Rajiv Shukla (BCCI Vice-President, Congress): We have held positive talks (with PCB Chairman Shaharyar Khan and National Security Advisor Tariq Aziz). I am hopeful that Pakistan will play at Ahmedabad. I have been advised (by former Pakistan Prime Minister Shujat Hussain) to take up the issue with President Pervez Musharraf, who happens to be the Patron-in-Chief of the Pakistan Cricket Board.

Feb 8: S K Nair (BCCI Secretary): "We are discussing the issue with PCB offficials, we have to find a solution that is acceptable to everyone. We will be flexible. The BCCI will try to "accommodate" the concerns of the visiting team while finalising the itinerary for the three Tests and five one-dayers that the two teams are scheduled to play. We have to keep our options open to thrash out the issue at the earliest. Pakistan have objected to Ahmedabad due to security reasons but we have no alternative venue in mind yet. I am confident that the stalemate will be resolved amicably. I am sure it will be sorted out soon and we will be in a position to draw up the fixtures at the Board's Working Committee meeting in Delhi on Feb 17.

Feb 8: Digvijay Singh (former Madhya Pradesh Chief Minister, Congress): What has cricket to do in the elections to Jharkhand Assembly? There is no relation between cricket and polls. The manner in which Modi raised the issue demonstrated his communal thought. Even India did not play a match in Karachi on security reasons but the issue (on Ahmedabad as venue) is still to be decided.

Islamabad should show sportsmanship and accept the challenge to play in Gujarat. Why did Pakistan not have any problem when around 250 delegates from that country attended a Lions Club-sponsored convention in Ahmedabad followed by a Pakistani sports team participating in a special Olympics a month ago?

I think Pakistan wanted an excuse as it is scared of a defeat. The UPA government would be responsible if it yielded to Pakistan's demand for change in venue. Instead of expressing reservation to play in Gujarat, Pakistan should stop perpetrating violence in Kashmir.

[Civilised paraphrase as provided by PTI, though Mr Modi was back to his familiar hobby horse of challenging "Mian Musharraf" and Delhi's Congress government and PM]

Feb 7: Girija Vyas (Congress spokesperson): Though the city (Ahmedabad) had witnessed communal violence that had been meticulously planned by a political party, the new (ruling Congress) government (at the Centre) is trying to get over that image. We have been trying to project the secular character of our nation and people. It is very unfortunate. Pakistan should know that the majority of the people here never supported those elements (that fanned communal tension).

Feb 7: Raj Singh Dungarpur (ex-BCCI President): There must be "political pressure" on Pakistan Cricket Board for not wanting to play in Ahmedabad and India should consider its request for a change in venue. If they are uncomfortable in playing in Ahmedabad, there must be some political pressure. I don't know why such a hue and cry is being made over the matter. There is no dearth of grounds in India and the match can be played anywhere.

India had reservations over playing in Peshawar and Karachi during last year's high profile tour of Pakistan, but the PCB did not make an issue out of it. We cited security problems and asked for a change in Peshawar as a Test match venue and they accepted our proposal without any hesitation. So now when they are requesting a change, we should take it into consideration. After all we all know what happened in Ahmedabad.

Feb 7: Mukhtar Abbas Naqvi (BJP Vice President): The government should make it clear to Pakistan that the venues for matches were a prerogative of the host country. Pakistan is playing political games and is not showing sportsman spirit. Pakistan's objection to play in Ahmedabad shows that they are not interested in playing cricket but the games of terrorism. If they do not want Ahmedabad as a venue they should play nowhere in the country. India played in one of the most insecure places, Karachi, and there is no reason why Pakistan should not play in Ahmedabad.

Feb 7: Jaya Jaitly.(JD-U leader): If communal violence is the reason for Pakistan refusing to play at Ahmedabad (they should remember there have been) communal riots in different parts of the country since Independence. They should refuse to play in Mumbai also, if that's the case.

Feb 7: Pakistan Cricket Board (official statement): With reference to speculative reports regarding the choice of venues for Pakistan's forthcoming tour of India, the PCB hereby clarifies that after receiving the report of the security team that recently visited India, the PCB has requested BCCI to change the venue of the second Test from Ahmedabad to any other venue of Test status in India on grounds of security.

In making the request, PCB wished to preserve and strengthen the bilateral relations that have been enhanced at the public and government levels after the resumption of cricketing series between the two countries," it added.

PCB contradicts reports suggesting any motive other than security in making this request, the statement said.

PCB has all along maintained that the venues issue should be amicably resolved between the two Boards and that it was the privilege of the host country to select centres for the matches.

Feb 7: S. Ramachandra Pillai (CPI-M): It is condemnable, especially when we are trying to introduce more confidence building measures to improve bilateral ties.

Feb 7: Narahari Amin (President, Gujarat Cricket Academy, also a Congress member): I will raise this issue in the next BCCI meeting on February 16. Our message (to PCB) is clear -- either play in Ahmedabad or call off the entire series. GCA is yet to get an official intimation about the Pakistan Cricket Board rejecting Ahmedabad as a Test or one-day venue for the much-awaited series between the arch rivals. What kind of political reasons are they citing. If it is the post-Godhra communal riots that he (Shaharyar) is indicating, then I would like to know as to after how many years will they pardon Gujarat?

[He was asked if the Pakistan government could have a 'personal score' to settle with Gujarat as Chief Minister Narendra Modi had often criticised General Pervez Musharraf during his election campaigns, to which he replied]: Yes, Modi could be the reason behind their decision as there does not seem to be another reason. The GCA, however, will continue with its preparations for the series till it got an official word from the BCCI.

[The GCA, along with senior police officers had shown all facilities at the Sardar Patel ground at Motera and all related arrangements for the players to Zakhir Khan and Sohail Khan, the two-member security assessment team of PCB, on January 29.]

Feb 6: Shaharyar Khan (PCB Chairman, telephone interview to PTI): Yes, we have expressed our inability and our reservations are based on political reasons.

Since our objections are politically based, we thought it better to completely ignore the centre instead of agreeing to play a shorter version of the game there," the 70-year-old former diplomat said.

India had security concerns and not political concerns about Peshawar and Karachi. Therefore, it was mutually agreed that limited overs internationals could be played at these centres. We have written the letter (to BCCI informing them of the above) on the basis of a report given by the security assessment team that recently visited India and on the advice of the Foreign Ministry, which is believed to have expressed apprehensions over the law and order situation in Gujarat. So far BCCI has not proposed any alternate venue, but  if Chennai was offered, PCB would have no objections.