If Pakistan can address just a few issues, they will be able to match India in Bangalore. 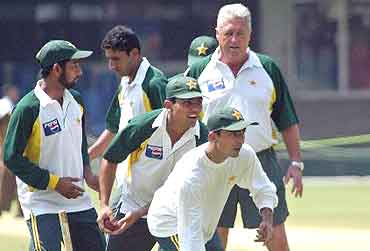 It is customary to sermonise the losing team. Reverse Swing is not going to miss this opportunity. Still, sermonise it will, but with a difference. This is not meant to be a post-mortem of the defeat, but, in keeping with the bonhomie of the times, a plea laced with goodwill and hope. This Pakistani team has been merely defeated at the Eden, not disgraced.

1)  Stay positive: That last sentence of the paragraph above is what every Pakistani player must recite silently, or aloud, as often as possible. Till the last ball of the fourth day was bowled – and resulted in Shahid Afridi being snared by Anil Kumble’s obvious leg-side trap – it was anybody’s game. In fact, at the end of the second day, it looked to be going Pakistan’s way.

2)  Do not mess with Afridi: The boy was right in saying before this series that, with the captain and coach’s backing, he could have been the first Sehwag. He will fall at times for traps such as Kumble’s. So will Sehwag, who could have become the second Afridi. But, the vulnerability to such traps comes free with the ability to turn a match around in half a session. If you want the second, you have to learn to live with the first.

3) Begin well: Taufeeq Umer is a decent bloke. But what had poor Salman Butt done to be dropped? He had batted well in Australia. Mohali was his first introduction to an Indian pitch and team. Okay, he failed in both innings there. So? It seems Pakistan are following in their neighbour’s footsteps with regard to handling the opening slot. That is ironic, since India’s opening slot is just beginning to acquire a settled look.

4) Discover the pace within: Assuming that neither Shoaib Akhtar nor Shabbir Ahmed can be rushed in time for the Bangalore Test, Pakistan must find a good new ball (and old ball attack beyond Danish Kaneria) from within this team. First, bring back Naved-ul Hasan Rana. Mohammad Khalil, as of now, does not make the cut. And do something to make Mohammad Sami and Rana do consistently what they do well only in brief patches, which is to cramp the Indian batsmen.

5) Leverage Razzaq: The Bangalore pitch generally assists spinners. And Kaneria needs some backup. Since Pakistan can play five bowlers, given that one of the bowlers, Abdul Razzaq, is a good batsman too, why are they not leveraging this one advantage they have over India’s non-all-rounder team?

6) Respect Kumble: Far too many teams have tried to trifle with the great man and perished, in India and abroad. Kumble is not to be taken lightly just because you don’t understand what he is trying to do. That is all the more reason to be wary of him. Play him and Lakshmipathy Balaji out. You will have your opportunities against the under-pressure Harbhajan Singh and off-colour Irfan Pathan.

7) Hire an interpreter: Bob Woolmer is an excellent coach. (He did make South Africa the second best team in the world at one point.) Is he able to communicate with the Pakistani players? Is language a barrier?