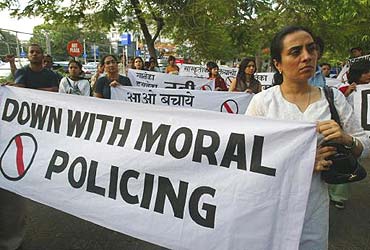 You must have known through media reports that Chandra Mohan, a student from the Department of Graphics at the Fine Arts College in Baroda has been arrested on 9th of May 2007 for making an allegedly controversial painting depicting nude figures with some religious motifs. The arrest followed the storming of the university premises by a group of outsiders. The work in question was part of a display in the college premises for assessment by a team of examiners for a Master's degree in Fine Arts. Charged with sections 153 and 114 as well as sections 295 A and 295 B, he has been denied bail and is presently in Central Jail, Baroda .

In a civilized society any dispute on a controversial depiction or content of a work of art can be dealt with through dialogue and consultation with experts in the field rather than left to self-appointed moral police employing coercive means. In the present case, the outsiders taking law into their hands barged into the university campus without prior permission, did not consult or inform the Dean of the Faculty before disrupting the annual examinations in progress. The reports are that they returned again to abuse the Dean and threatened him with dire consequences.

Such an instance of assault on a student by outsiders in the university premises is unprecedented in the history of the Faculty of Fine Arts and must be condemned in no uncertain terms. The Fine Arts College known nationally and internationally for upholding the highest standards of creative and critical practice has also earned reputation for its firm commitment to the freedom of expression. The former authorities of the university like Smt. Hansa Mehta, the very first Vice Chancellor in the 1950s up to Prof. Bhikhu Parekh in the 1980s have stood by the Faculty and its ideals.

The present assault seems to strike at the very ideals on which it was built by pioneering artist-academics and supported by enlightened university authorities. The present administration of the university has not initiated any action against the trespassers or applied for bail for the victimized student. The students and staff of the Fine Arts College have organized a dharna and the Acting Dean, Prof. Shivaji Panikker has planned to undertake a hunger strike in the College premises against the assault on the student and callous attitude of the university authorities. (Latest report is that the Department of Art History has been sealed and Prof Panikker has been suspended by the university authorities). A solidarity demonstration of artists, intellectuals and cultural workers from all over India is called on 14th of May at the Fine Arts College premises (Pushpabug, University Road, 2 pm onwards) with an appeal to all concerned to gather there to lend their support.

As an alumnus and former teacher of the Faculty of Fine Arts, I fear these developments may imperil the working of an institution which in many ways has formed our lives; and is indeed an integral part of what we are today. I hope all other alumni and teachers as well as concerned artists and intellectuals of the country will come forward to protect it in its moment of crisis when the values it stands for are threatened.

Only The Elephant Could Trample The Cycle