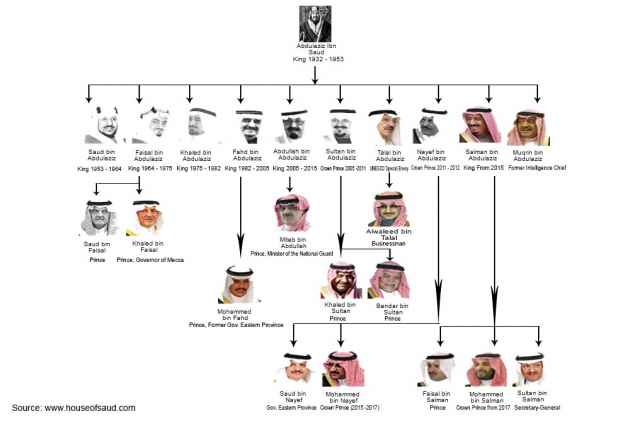 The anointment of 31-year-old Mohammed Bin Salman as the Saudi Crown prince marks a dramatic reordering of the line of succession of Saudi Arabia’s royal family, also known as the House of Saud.

This family tree of the kingdom’s royal family shows that the latest development marks a generational shift in the kingdom’s dynasty.

Saudi Arabia's King Salman on Wednesday removed his nephew Mohammed bin Nayef ,57, as crown prince and installed his son Salman in his place.

According to BBC, Prince Salman's rapid ascent is seen by the younger generation as a sign that things are changing. Saudi Arabia has typically been ruled by kings in their 70s or 80s. Since the removal of King Saud in 1964, orderly successions passed along the sons of the kingdom’s founder, Abdulaziz.

On Wednesday, Prince Nayef was also removed from his role as head of domestic security. He has pledged allegiance to the new crown prince and his younger cousin, Salman.

The King Salman, 81, is reportedly not in the best of health. According to analysts, Prince Salman could, potentially, lead Saudi Arabia for decades, heralding a long period of internal stability. The decree promoting Mohammed bin Salman includes a clause preventing him from appointing one of his own sons as his heir.