'Still makes his contribution, enjoys his cricket and be in the limelight. He has provided a leadership role to the likes of Virender Sehwag, Gangulys and Dravids. That's the Tendulkar hallmark.' 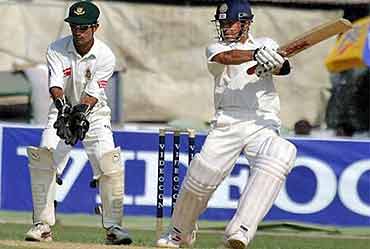 I can sense Sachin Tendulkar is causing concern in India. Millions in their homes or offices, classrooms or playgrounds, in beds or little gathering of friends, want to know if he is fit for Pakistan. There is less sympathy for his tennis elbow and more disapproval on how he has gone about it. All questions on technique and temperament, style and method are shot at him. The revisionists are questioning his place in history.

Injuries you can never tell. The years logged on are reflected in a weary frame. Much as we hope against, we still age. A quick-fix and the show moves on. There is no sense in blaming Tendulkar if he rushed his return in order to feast on Bangladesh. He couldn't have done it without encouragement from doctors. I am in his corner.

It is stupid to blame his heavy bat or bottom-hand grip for his distress. I mean he would soon have the most Test runs and centuries than anyone else in history. All those one-day hundreds. He can't bat with two more hands. Rubbish, utter rubbish. Give me a break.

There is still more whining: He is no longer dominant. But people change, experience factor gets in. If that's the way he sees it, that's the way it is. Sometimes you can't any longer do those things. Body is not in the best of shape. It doesn't listen to your mind.

Having been a cricketer, let me sense this young man's mind: Oh, I am injured now, let me lay off for a while, recover and then produce the same passion and freedom. Play on while I recover and then bring on the magic. It could well be the lull before the Tendulkar storm.

You then moan that he is not a good finisher of matches, like Brian Lara has been at times, and hasn't won India many games. But then Tendulkar handled the pressure when it was most required in the course of a match. He can't do much if your fast bowlers lack firepower. I have always felt India has been lacking in this department.

Revisionists feel he hasn't turned out to be the Viv Richards he once promised. They wonder if he has the tenacity of a Sunil Gavaskar and the style of a Lara. Batting Gods like Sir Donald Bradman and Garfield Sobers are brought into the equation. It is being made to look as if Tendulkar has faced any lesser bowling than we did in our times.

Today you still have the likes of Shoaib Akhtar and Brett Lee in the field. Steve Harmison was captivating in the West Indies. Irfan Pathan is wonderfully aggressive and came up with good scalps in Australia. Guys are consistently trying to bowl as fast as they can. There are Murali, Shane Warne and Anil Kumble. Batsmen are scoring runs and at a fast clip. It's a fair quality.

There is better technology, the game has moved along scientific lines. Individuals are mapped better, there is a blueprint for each batsman and bowler. Chinks are honed in and then exploited.

The bowlers Gavaskar played against were the best quicks in the world. While others were cowering under the fear-factor, Sunny was successful and produced a chain of centuries against the pack of wolves. I have some sentiments about Sunny but Tendulkar is very fresh and attacking in style. He is still lord of the manor, still makes his contribution, enjoys his cricket and be in the limelight. He has provided a leadership role to the likes of Virender Sehwag, Gangulys and Dravids. That's the Tendulkar hallmark. That was of the Little Master as well. They have passed on their contribution in the manner they gave confidence to others. It went beyond runs. India has been a better team because of it.

The thing about batsmanship is the inspiration it provides to future generations. Bradman did it. Everybody who looked back in the past, took him as a model. Don represented it. He was the best cricketer playing in his era. He inspired the coming generations. The same is true with top batsmen of all eras. There have been so many of them.

Among openers Gavaskar, Desmond Haynes. Geoff Boycott brought his own value to things. Ricky Ponting at number three, Tendulkar, Lara, Damien Martyn, there are so many of them. I don't like naming my favourite World Eleven because I prefer options. If there are no options, it means you are desperate and nobody likes being in such a situation. Even for my car, I prefer two keys! I have the same reasoning for teams.

Often I am asked to compare the modern-day Australian team with the West Indies of 80s. How we would have fared against each other? We would never know and can keep speculating. I would have loved the opportunity and the Australians would be saying the same thing. It's like being in the boxing ring: Once inside, you expect to win. You don't let the other guy beat you. It is a challenge which is inviting to me and to a lot of other guys. But the distance of time can't be bridged.

(To be continued tomorrow).