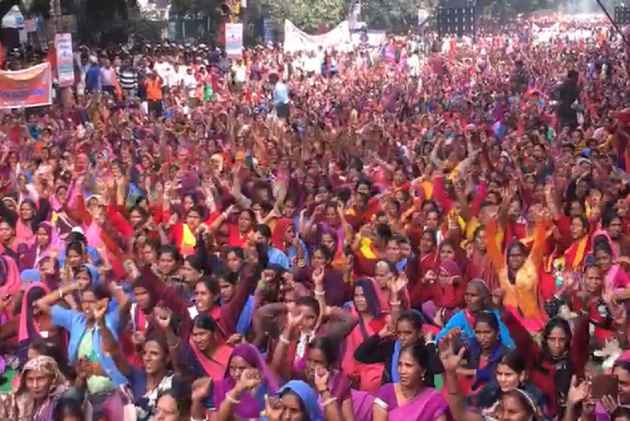 The Bharatiya Mazdoor Sangh(BMS), the largest trade union in India backed by the RSS, held a massive rally in Delhi on Friday against the “anti-labour policies of BJP-led government".

Some of the main demands of the workers were abolishment of contract labour system, equal work for equal pay, increasing the working days from 100 to 200 a year under the MNREGS scheme, ensuring social security of all labourers and rectification of anomalies in the seventh pay commission  recommendation by fixing a minimum salary of Rs 24,000 for a worker and rehabilitation of workers and reimbursement for GST-affected unorganized sector.

Addressing the workers at the event, Saji Narayanan, the National President of Bharatiya Mazdoor Sangh, said the government has agreed to listen to the demands of the workers after people from all across the country came to Delhi to become a part of this event.

Talking about labour laws, the BMS president said, "The government is talking about Sram Sudhar but the rights that we already have were introduced when B R Ambedkar was the Labour Minister under the Viceroy's council before independence."

Narayanan said even after 70 years of independence, none of the governments has done anything for the welfare of the workers.

Praising Ambedkar, Narayanan said, "No government has the right to break the laws that were introduced by Dr Ambedkar,"

Earlier, BMS had also blamed the government’s “faulty” advisers and “misguided reforms” as the key reasons for the economic slowdown. It also demanded a stimulus package for the labour-intensive sectors.

"Many of the good intentions and efforts of the Prime Minister are neutralized by lack of proper experts, dependence on faulty advisors and bureaucrats, misguided reforms, lack of communication and feedback from social sectors," Narayanan had written in an exclusive article for Outlook.