Senior Supreme Court lawyer Sanjay Hegde says the very idea of public lynching is 'unconstitutional' even according to the top court, adding the MPs don't realise the 'limits of parliamentary language'. 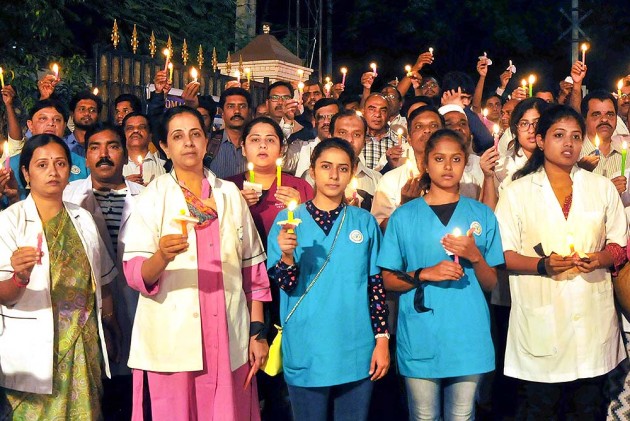 The rape and murder of the 27-year-old Telangana veterinarian sent shockwaves across the country, bringing back the horrific memories of the gruesome gangrape of a Delhi medical student on a bus in December 2012.

"These people need to be brought out in public and lynched," Jaya said in the Rajya Sabha.

Seconding Jaya, Chakraborty, too, said there was no "need to take rapists to courts with protection" and then wait for justice.

"I agree with her. I don't think we need to take rapists to courts with protection and then wait for justice. Immediate punishment is needed," Chakraborty tweeted.

However, many have also raised concerns over "public lynching" of a criminal in a democratic society, and the repercussions of letting the people take the law and order in their hands.

Senior Supreme Court lawyer Sanjay Hegde says the very idea of public lynching is "unconstitutional" even according to the top court, adding the MPs don't realise the "limits of parliamentary language".

He said what the parliamentarians said was "designed just to replicate the feelings" of the public.

Referring to the 1983 Mithu vs the State of Punjab case, Hegde said the apex court, even in that case, had ruled that the "mandatory death penalty is unconstitutional".

Tehseen Poonawala, another senior Supreme Court lawyer and political activist, asked if we could even imagine "public executions in a democratic society".

"It's ridiculous that elected members of the Parliament speak about lynchings," he told Outlook.

Recalling the case of a class 2 student, who was found in a pool of blood -- his throat slit -- in the toilet of a Gurugram school, Poonawala said there was a lot of hue-and-cry over the bus conductor who was accused of molesting the child.

The conductor, later, claimed he had been coerced into confessing the crime and he is currently out on bail. A class 11 student was later arrested for the crime.

"Imagine if the immediate lynching was a thing, we would have lost a life. Can civilised society celebrate murdering people in public?"

"What we require is not to shame the people, scientific investigation, speedy trials leading to convictions," Poonawala said.

"Instead of addressing the problems that have been there for so many years, we come up with ridiculous and idiotic ideas which are undemocratic," he said.

Kavita Srivastav, General Secretary of People's Union for Civil Liberties (PUCL), Rajasthan, said, "a lawmaker telling the people to take law in their own hands should be condemned."

She doesn't, however, want to doubt their "emotions".

"What the rape culture and misogyny have become in our country... hang them or chemical castration... but in any case, rape-cum-murder is a death sentence," she said.

"They have not read the law."

Kavita added that you can "eliminate one or two", but will that finish the rape culture. She also expressed anguish over "selective outrage".

"These things don't act as a deterrent."