'Religious Fundamentalism, Not Just Some Madrasas'

'Do It Now' is hardly a variation of the Nike exhortation for the West Bengal chief minister, who speaks on the controversies surrounding him in the first year of his tenure. 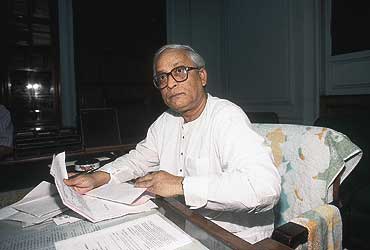 Where others exude gung-ho optimism and breezy confidence, West Bengal Chief Minister Buddhadeb Bhattacharji projects a consciously different persona in media interviews: sincere, self critical, yet self assured  -- a combination of qualities that has its own attraction. It was no different as he spoke to Outlook on completion of one year of his tenure.

Underplaying some of the positives the state has chalked up under him -- a more accountable administration, a new positivism on work culture, stress on education, public health and industries, an alternate agricultural strategy -- Bhattacharji insists all this is only a beginning and that the road ahead will be difficult.

There are questions as to how far his party, the CPI(M) will allow him to go . Already the party has virtually overruled him on the issue of monitoring some madrasas, dealing with errant doctors , not to mention the right of political parties to hold rallies and processions.

His critics naturally make much of this, but they overlook that on most other matters of policy, the party has been wholly behind him. Not bad for someone who has had to replace the towering Jyoti Basu as Chief Minister and emerged as the party's most presentable face to the people all in a single year in a difficult state like West Bengal.

Bhattacharji: I think we in Bengal have to remain vigilant in our areas bordering Bangladesh and Bhutan. There are certain trends and incidents we simply cannot ignore. There was the recent arrest of confirmed ISI agent Dilshad from North Bengal. You remember the kidnapping of Partha Ray Burman, owner of Khadim company. That is only one of 18 terrorism-related incidents we have had to deal with. The problem is, some activists operate out of Pakistan, India and Bangladesh. There has to be a change in the working style of the administration as well....

Obviously, now more than ever we need more accurate intelligence, more modern weapons to face up to the challenge that we face from terrorists on the ground. We have discussed our problems in Delhi and the centre appreciates our problems . Efforts have to be made at the political level among the countries concerned .

You once spoke of taking action against some madrasas, sparking off a major controversy......

We understand you are suggesting to the centre to amend the provisions of the Indo-Bhutan treaty of 1949 and the Indo-Nepal treaty of 1950. Would you please explain why ?

As you know, these provisions enable citizens of Nepal and Bhutan, and India to visit each others' country without visas, to work, settle down and carry out business here. Nothing wrong with all this. Only problem, Katahmandu has now emerged as a major operational centre for the Pak intelligence agency, ISI, for some time.

We have evidence of undesirable elements taking advantage of near-open borders to move freely into India and carry out their sabotage. The hijacking of the Indian plane that was flown to Afghanistan was masterminded form Kathmandu and elements within India. So we suggest that there should now be more checks on people entering India from neighbouring countries, ensuring at the same time that the traditionally cordial relations between these countries is not affected at all.

I have discussed this with Union Home Minister L.K.Advani. In Bhutan again, there is the problem of the camps run by insurgents, where ULFA and Kamtapuri agitationists take arms training, with ISI help. We must make movement more difficult for them.

After the recent communal violence in Gujarat, there are reports that some industries want to shift out of the state....

Perhaps, but I would rather not invite them here myself ... I do not believe in taking advantage of others in distress, although in the past, leaders of other states had done it to us .

There is a common perception that you are far more concerned with films and urban culture, instead of grassroots level folk culture ....

(smiles) You say this because I visit the Nandan cultural complex frequently.. No, it is by no means as though we have neglected our traditional, rural folk culture and the arts. There are folk academies in every district and regular cultural fairs there, with accent on literary activities, handicrafts and folk music. We now know the exact number of people involved on Chhou dancing in Purulia and are compiling a census of Gambhira artists in Malda so that the government can help them more effectively. We have district rural fairs held in Kolkata as well.

How do you assess you official performance in the past year ?

I think a beginning has been made, that:"s all. Youy will perhaps agree that roads are a little better now and so are our health centres in the rural areas, where I visited. We are working also on Health and education sectors, but punctuality and regular academic tests have been ensured. In agriculture, we have problems of over production and cultivators are getting proper price for paddy.We are thinking od diversifying agriculture, now that the first phase of our rural reforms is over. For instance, we plan to increase the production of potatoes, pineapples , mangos and lichis with an eye to exporting them.Similarly we have identified areas where horticultural and vegetable production would be increased. Mind you ,we lead most other states in agricultural production, but we plan to consolidate the position.

What of industries, are enough investments coming in ?

With the commissioning of the Haldia patrochemical plant, there is a definite flow of investments. Mitsubhishi, which has its only Indian unit in Bengal, is putting up another one. Over 500 downstream units have come up in Bengal and neighbouring states. Big organisations like L and T, Lafarge , Bhushan Steel and others are setting up major units. During the last three years, we have secured new investments of over Rs 10,000 crore which does not compare unfavourably with other states.

However, infrastructure remains a problem and a priority. The Asian Development Bank is helping us build the Haldia -Kolkata and Kolkata -Siliguri highways, which will certainly accelerate the pace of development in our state. During the last couple of years we have opened over 30 new engineering and medical colleges. We are also setting up a new biotechnology unit and are setting the pace in IT where international majors are coming here to invest and we are exporting software over Rs 1200 crore within two years.

But all this, again I emphasize, is only the beginning. In view of our unemployment problem and requirements, we have a very long way to go.

What is the response to your slogan -- Do It Now?

There has been some improvement, but not much, I think. I think I need to repeat this slogan and monitor progress strictly. If people (government employees) respond, fine, but if they do not, then naturally we have to think of other measures.

Under The Nuclear Shadow