'Ready To Be Punished If Guilty'

It's Raj Thackeray vs. Bachchans once again as the latter face the lumpen chauvinistic fury from the MNS and Amitabh Bachchan has to step in to say: 'We never have and never can look at Maharashtra with disrespect. If inadvertently this is what has 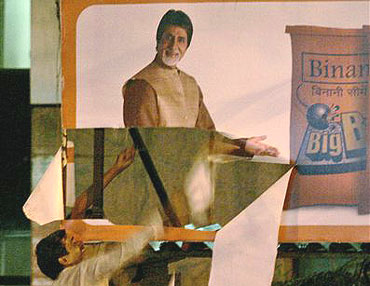 The Bachchan vs. Raj Thackeray saga continues. Call it Part II. The provocation this time? A remark by Jaya Bachchan at the music-release function of Drona, a new film starring her son Abhishek Bachchan: "Hum UP [Uttar Pradesh] ke log haen, isliye Hindi mein baat karenge. Maharashtra ke log maaf kariye" [We are from Uttar Pradesh and will therefore speak in Hindi—Maharashtrians will forgive us].

It was enough for Raj Thackeray, ever on search for a cause for his Maharashtra Navnirman Sena (MNS), to quickly move in to address a press-conference and announce: "All Bachchan family movies and advertisements in Mumbai and Maharashtra are banned from today (September 8)."  "This is an affront to the Marathi Manoos (Marathi-speaking people)," he went on to say. "All parties should unite and condemn what she said."

Since then it has been sheer mayhem on the streets of Mumbai. Premier of Amitabh Bachchan's film, The Last Lear had to be called off.  Prompting Amitabch Bachchan to offer a detailed statement via his blog -- reproduced verbatim with no editing:

Arriving into London last night after a most satisfying trip on the Euro Star, from Paris, I am inundated with sms and text messages from the press on my mobile, on the happenings and controversies occurring in Mumbai, over remarks made by Jaya at the music release function of  'Drona', Abhishek’s film on release.

Being out of the country and due to the time factor I am unable to comprehend first hand what has transpired. So, I look up the net. Read reports, statements. See video footage.

I open my blog and read comments. There is some mention there as well. Some for and some against. Without knowing the facts I am unable to acknowledge the media.

Distant from family and without connection to others I assess how best I can, the situation. And because my commitment to my readers is as fair and as transparent as has always been, I respond.

This is ostensibly for the readers that question me, but I shall not prevent the media from looking at it as an acknowledgement to their numerous queries.

I am by nature an individual that invariably, when confronted, addresses an issue by looking at the other person’s point of view first. This is my character. I was born with it and shall remain with it. I cannot change it now. Many friends and family look upon it as a malaise, which is defensive, wrong and incorrect. But, much to their dismay I have remained unchanged.

My first reaction therefore is, that in this matter, sentiments have been hurt.

I am not going into what has been said and under what circumstances. But rather that, even if one person is disturbed, then I would wish that that disturbance be addressed first. All else can come later.

I immediately therefore sent an sms to Jaya stating that:

The casual off the cuff remarks made by her at the music launch function were without malice or deliberate intent, but if it has caused hurt to the sentiments of Maharashtra, Maharashtrians and indeed the city and citizens of Mumbai, then she must seek regret and offer apology. Everything that we possess today is what came to us from this great state and city. We never have and never can look at Maharashtra with disrespect. If inadvertently this is what has been construed, then we apologize and are sorry and seek forgiveness for any sentiments that have been hurt.

I have remained awake the whole night.

Driving to the airport in London early morning, I rummage through the detailed bunch of faxed cuttings of the press in Mumbai of date and am pleased and satisfied to read in the Mumbai Mirror that Jaya has on her own spoken to the media on very same lines, regretted the hurt caused and apologized.

I feel grateful and happy.

Jaya has had her education in this State – in the Film Institute in Pune. Lived and graduated from that city. She speaks fluent Marathi. A major portion of our staff are all Maharashtrians. Jaya’s personal maids have been with us for almost 40 years and Jaya speaks to them in the house, only in Marathi.

Can we ever show disrespect to the local language ?

My make up man Deepak Sawant is a Maharashtrian and has been with me for 35 years. And still continues. I have worked along with Jaya in a Marathi film that he produced. He later and more recently produced 2 films in Bhojpuri. I worked in them, without cost.

When the Marathi film ‘Swaas’ was selected for the Oscars and the producers did not have money to go to Los Angeles to promote the film I contributed to their expenses by giving them 11 lakh rupees.

In my production company AB Corp we have been encouraging Marathi talent and filmmakers. One such project has been financed by us and work is in progress. This project is Jaya’s brainchild and she initiated it.

Recently a brilliant Marathi writer and noted intellectual lay critically ill in hospital not having the means to pay for his treatment and subsequent survival. I contributed voluntarily to his expenses again to the tune of 11 lakh rupees and am happy to state that he survived. His wife wrote a most emotional letter of thanks to me.

Dr Mandke, a Maharashtrian and a brilliant heart surgeon, died suddenly and unexpectedly, ironically of a heart attack and ironically, in the middle of putting up a 400 bed Hospital in Lokhandwala in the suburbs of Mumbai North. His wife wanted his dream to be fulfilled and I spoke to my friend Mr Anil Ambani to help fund its completion. You will be happy to know he followed my request and the Hospital shall soon be nearing completion and get operative – a most welcome and desired facility in this vast and Hospital starved metropolis.

Mrs Mandke’s request was brought to me by my own family physician, Dr Barve. Yes a Maharashtrian and one who is like a family member to us. No medical decision is taken in our family without his consent or approval.

Can we ever show disrespect to Maharashtra ?

My father’s works have been translated into Marathi, indeed the first regional language to have initiated that, and has formed an ingredient in the curriculum of the educational system in the state. Even till today I have entertained requests from Marathi writers wanting to translate my father’s works and in particular his autobiography and I have readily and happily given consent without ever considering copyright costs.

Many are not aware that Jaya has spent several constructive years working with the Institute for the Rehabilitation of Handicapped Children, at Haji Ali, next to the Race Course in Mumbai. She initiated and organized drama and musical evenings with deaf and dumb children for the public and we even patronized in sending this group out of the city to perform at various other places. I myself have been to these evenings and it is a marvel to see mentally and physically challenged children performing acts of song and dance on ‘Krishna Leela’ and the ‘Ramayan’. My children and I have given our voice commentary on this activity’s promotion.

Many are unaware that Jaya is an integral part of an organization called ‘Yuvak Biradiri’ a non-government body that does huge amounts of charitable work with and for the Youth of the State of Maharashtra. Natural disasters, blood banks, social service and many related activities have been undertaken most successfully by them and gained huge credentials with the Government in power. Most importantly has been the work that we did for the desolate during the terrible earthquake that ravaged Latur in the interior of the State. We funded the relief work and looking after of the feeding of an entire village for one month, during the crises, virtually adopting it.

RR Patil, the current Home Minister of the State faced a heavy drought condition in his constituency in interior Maharashtra. We contributed substantial funds so that the Yuvak Biradari boys could go and work there to alleviate the suffering of those affected.

And I am not even going into the vast monetary contributions that we as a family have made to Hospitals – Hinduja in Mahim, Mumbai, the Breach Candy in South Mumbai and several other institutions for the blind and the needy.

We have signed on for the education of children. Every year 2 or 3 children get educated in Mumbai through our funding because they do not have the means.

All our unused and old personal clothing goes to a ‘Home’ that cares for the poor.

Abhishek and Aishwarya take personal care and concern on the welfare of AIDS affected children in another special "Home’ in the city.

Does all this reflect disrespect for Maharashtra, Maharashtrians and Mumbai ??

I say all this with great humility. I had never ever wanted to justify our deeds and acts. I am not comfortable with it. But just because we remain quiet does not mean that you can label us with guilt and inconsideration.

We are law-abiding citizens of this country. If and when I have wronged there has been admittance of it. I am ready to be punished if guilty. But you cannot punish us with wrongful accusation.

Jaya’s remark does not in any manner sound anti Marathi. There is no denigration. But words have a funny way of being mutilated to suit a particular copy or expression, in its interpretation. At best they were more pro official/national. But nationalism is often anathema to the excessive tabloidised nature of the times of these days. And did not work. So the next best was glamorized and hence perhaps the strong reactions.

We are concerned and simple citizens of this great country of ours. God has been gracious to us and to the small contributions we as a family, starting from my illustrious father, have made . There has been respect and recognition both within and outside the country. We live a quiet and a non interfering life. Our desire to remain within us has been judged incredulously as arrogance. Blessings have come in abundance from well wishers and fans. We are far removed from the exalted position that the outside world considers us to be in.

I have but, just a simple observation to make.

If we have reached where we have today in the eyes of the people. And survived. There must be something we are doing, that is right.

I pray each day for peace and harmony and strength. And the will to continue doing what is right. So help me God.

His Will Was His God