The endangered Serow was last spotted in 2018, say wildlife officials who filmed the creature 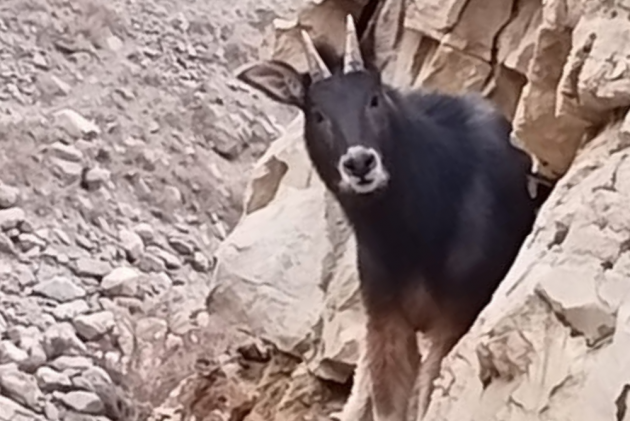 In a rare sighting,  the state wildlife wing of Himachal Pradesh has spotted and filmed a Himalayan Serow – an endangered medium-sized goat-like antelope -- in the cold deserts of Spiti , a region under heavy snow these days.

Reports reaching Shimla said this was the first time ever that the Himalayan Serow had been  spotted near Hurling village,  20 km from Sundo on the Indo-Tibetan border. The state’s Chief Wildlife Warden Archana Sharma  said the Himalayan serow was last seen in the Great Himalayan National Park (GHNP),  a UNESCO World Heritage site in Kullu a few years ago. Since then the animal was never seen in the Park area nor in the Spiti region.

“I received a call around 11.15 am from the villagers at Hurling ,who informed about an Ibex-- a wild mountain goat ( With long thick ridged horns and a beard) having got estranged near human habitations, “ Divisional Forest officer, Kaza Hardev Negi told Outlook over phone.

Negi along with other officials of the wildlife and forests wing immediately proceeded to the spot.

“We made a video and captured the animal on camera for the records .The team also helped the animal to get a passage back to the area from where it had strayed .However, after close studies and analysis, we realised that it was a Himalayan Serow,  not an Ibex, “ he said.

The wildlife department is really encouraged to note that this particular animal, whose normal habitat happens to be in the dense forest areas, is surviving in the area. "It is certainly an encouraging thing .We will keep the records about its sighting in the Spiti region “ said Archana Sharma. Earlier records show that Himalayan Serow was last sighted in 2018.

The International Union for Conservation of Nature (IUCN) has listed the Himalayan Serow in the category of extinction risk of the species.It is also listed in the Wildlife Protection Act (WPA)-1972 schedule –I.