A group of students have been protesting the appointment of Firoze Khan as an assistant professor at the Sanskrit Vidya Dharma Vigyan Department as he is a Muslim. 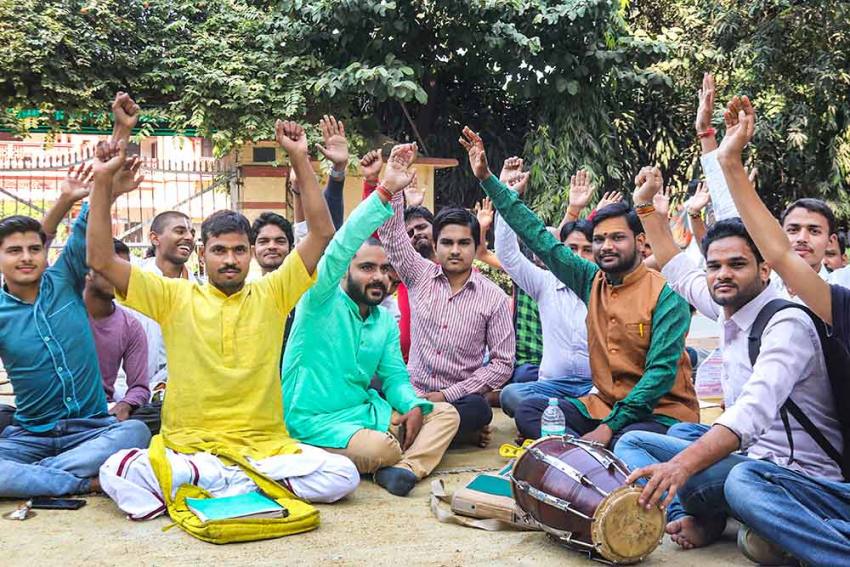 Students stage a protest dharna at the Banaras Hindu University (BHU) against the appointment of a Muslim teacher of Sanskrit at the universirty.
PTI Photo
Aritry Das 2019-12-10T15:16:59+05:30 'Ran To Save My Life': BHU Professor Attacked By Students For Supporting Feroze Khan 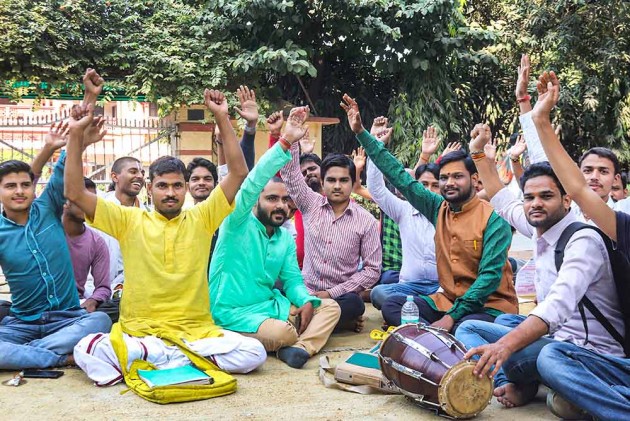 A Sanskrit professor at the Banaras Hindu University (BHU) was allegedly attacked on Monday by students for supporting his Muslim colleague, Feroze Khan, whose appointment in the department has resulted in a month-long protest.

Professor Shanti Lal Salvi, a senior faculty member in the Sanskrit Vidya Dharam Vigyan (SVDV) department, said he was chased by students outside of the faculty building.

"It was all planned. When the students saw me getting out of the faculty building, hundreds of them started chasing me. I ran around 400 metres to save my life and fortunately found someone who was going by motorcycle and got behind him," Salvi said.

The students were sloganeering and protesting near the gate of the faculty building before chasing him, said the professor who backed Khan's appointment at the SVDV Department.

He alleged another professor of his department had instigated students against him by spreading rumours about his wife being a Muslim and related to Khan and that he played a role in the Muslim professor being appointed at the department.

Salvi, who has been teaching at the department for eight years, said he never faced such kind of abuse or discrimination till now.

Salvi filed a FIR at the Lanka police station and also submitted a complaint to Vice-Chancellor Rakesh Bhatnagar against a few students and the professor he accused of spreading rumours.

Commenting on the students' agitation against Khan in the department, Salvi said, "Their mindset is of a certain way. There's no reason object. I teach the same subject of Sanskrit literature that Khan was supposed to teach. There is no problem in a Muslim professor teaching Nataka and Kavita. He was not going to teach Karma Kanda".

Khan resigned on Monday from the post of a teacher in the Sahitya department of the SVDV faculty, where he was appointed in November resulting in protests for over a month.

No classes have been held in the Sanskrit Vidya Dharma Vigyan department due to protests since November 8, the day after Khan's appointment.

"They have been protesting because they don't want a Muslim professor to teach at the department. But this is against Article 14 of the Constitution that gives you the right to equality. He was selected by a high-level committee and approved by the VC. We have told the VC that if they back down from appointing Khan, it will set a bad precedent," said Vikram Aggarwal, a post-graduate student of Sociology.

"The protesting students are saying a Muslim cannot do karma kand (rituals), so how can he teach? But that way even a Dalit or a person from the OBC community cannot do all that. Then, should only Brahmins be appointed as professors?" he asked, adding, "Professor Khan was appointed to teach literature and not Karma Kand."

According to the University, the SVDV faculty was established in 1918 by Pandit Madan Mohan Malviya "to preserve and promote the studies of Ancient Indian Shastras, Sanskrit language and literature with the intention to bring about a fruitful dialogue between the East and the West."

Aggarwal said that under the SVDV faculty, there are eight departments, including Sahitya. Among these, there are only three departments where people from other religions cannot teach--Vedic Darshan, Dharma Gyan, Dharma Shastra and Mimansha.

Chief proctor O.P. Rai met the student protesters on Monday and said Khan's appointment would soon be discussed at the executive council of the university.