The weather gods halted the march towards certain victory as heavy downpour and overcast conditions forced abandonment of the fourth day's play with the Windies needing 330 to avoid an innings defeat. 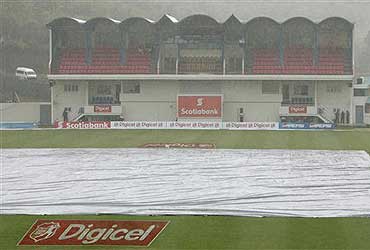 The weather gods halted India's march towards what seemed a certain victory as heavy rains and overcast conditions forced abandonment of the fourth day's play in the second Test against the West Indies today.

India were pressing for a rare win in the Caribbean after bundling out the hosts for a meagre 215 to amass a 373-run first innings lead.

The West Indies, following on, were 43 for one in the second innings with Daren Ganga on 24 and captain Brian Lara on 15 at stumps on the third day at the Beausejour stadium.

But India's push for victory was put on hold as persistent rains prevented a ball being bowled on the penultimate day.

Rahul Dravid and his men still stand a chance as one full day's play remains to collect the remaining nine West Indian wickets while the hosts need to score 330 more to avoid an innings defeat.

Forecast for tomorrow's weather is partly cloudy sky. India have won only three Tests in the Caribbean and last won a series here in 1971.

They had come tantalisingly close to winning the first Test in Antigua last week when they were denied by the last pair of Corey Collymore.

The start today was delayed due to a wet outfield caused by overnight rains.

As umpires Simon Taufel and Asad Rauf waited for the heavens fury to subside, the skies opened again in the afternoon.

Any chance of play starting later in the day was ruled out with puddles of water on the cover and heavy, dark clouds hanging over.

Dravid was understandably keen for the match to begin and had agreed to play in the morning even though the slush around the square was palpable.