Musharraf is expected to make the customary pre-Independence Day telecast unless he is prevented by the government from doing so. If he telecasts his message, he may give an indication of his future plans. Will he announce his resignation from the po 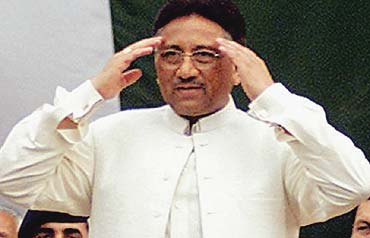 Pakistani President Gen (retd) Pervez Musharraf had held a party in his house on August 11, 2008, to celebrate his 65th birthday. The party was attended by a small group of officers of the armed forces and civilian bureaucrats, who are his close personal friends, and some close relatives. He did not invite any of the civilian political leaders. Among those, who attended, were the chiefs of the Army, the Air Force, the Navy and the Inter-Services Intelligence. Earlier in the day, they had officially called on him in his office to wish him a happy birthday.

The Mohajirs in Karachi held over 25 functions in different parts of the city to celebrate his birthday.

As a mark of defiance of the Taliban, which has been projecting music and dance as anti-Islam, Musharraf had invited some musicians to the party in his house to sing on the occasion of his birthday.

According to reliable Mohajir sources, the chiefs of the armed forces and the ISI have refrained from advising him as to what should be his course of action in the face of the campaign for his impeachment, removal from office and arrest mounted by Nawaz Sharif, former Prime Minister, who has reportedly been saying that he is determined to have Musharraf arrested and kept in the same jail in which Musharraf had kept him after he was overthrown in October,1999.

Asif Ali Zardari, the co-chairperson of the Pakistan People’s Party (PPP), who was initially against any impeachment and humiliation of Musharraf, is now going along with Nawaz Sharif for his impeachment and removal, but he continues to be against his arrest and detention if the impeachment motion succeeds.

The Muttahida Qaumi Movement (MQM), a predominantly Mohajir organization headed by Altaf Hussain from his exile in the UK, is very unhappy with Zardari for his succumbing to the pressure from a vindictive Nawaz Sharif. Mohajir sources allege that before the MQM agreed to support the PPP in its government formation in Sindh and participate in it, it had been assured by Asif Zardari that there would not be any impeachment or humiliation of Musharraf. According to these sources, Altaf Hussain is unhappy that Zardari should have gone back on his word and succumbed to the pressure from Nawaz Sharif without consulting the MQM. These Mohajir sources say that if Musharraf is sought to be arrested and humiliated under pressure from Nawaz Sharif, Karachi will go up in flames and no Punjabi will be safe there.

According to the same sources, Gen Ashfaq Pervez Kayani, the Chief of the Army Staff (COAS), and Lt Gen.Nadeem Taj, the Director-General of the ISI, who is a distant cousin of Musharraf, have told Musharraf that it is up to him to decide whether he will fight the Nawaz Sharif-instigated impeachment or quit. They have said that they would respect whatever decision he took.

Kayani and Nadeem Taj are worried that Al Qaeda, which has already unsuccessfully attempted thrice to kill Musharraf, might try to kill him if the government, under pressure from Nawaz Sharif, removes his physical security. They are worried--so are the Americans--that if it succeeds in killing him, it would be a big set-back to the war against Al Qaeda. They are determined to see that Musharraf’s life is not jeopardized because of the vengeful attitude of Nawaz Sharif.

It is learnt that Kayani and Nadeem Taj have assured Musharraf that he would continue to enjoy the physical security provided by the Army and the ISI even if he is removed from office.

The Federally-Administered Tribal Areas (FATA), from where the Tehrik-e-Taliban Pakistan (TTP) and Al Qaeda are operating, come directly under the President. The instructions to the Armed Forces regarding military operations in the FATA go from the President and regarding operations in the North-West Frontier Province (NWFP) from Rehman Malik, the Internal Security Adviser, who is a close confidante of Zardari.

If Musharraf is replaced by a civilian President, jointly nominated by Asif Zardari and Nawaz Sharif, the army is likely to tell the government that the internal security duties in the FATA and the NWFP should be performed by the police and para-military forces so that the army could focus on its core function of defending the border with India.

Musharraf is expected to make the customary pre-Independence Day telecast to the Pakistani people on the night of August 13 unless he is prevented by the government from doing so. If he telecasts his message, he may give an indication of his future plans. The Daily Times of Lahore has claimed that he may announce his resignation from the post of President.