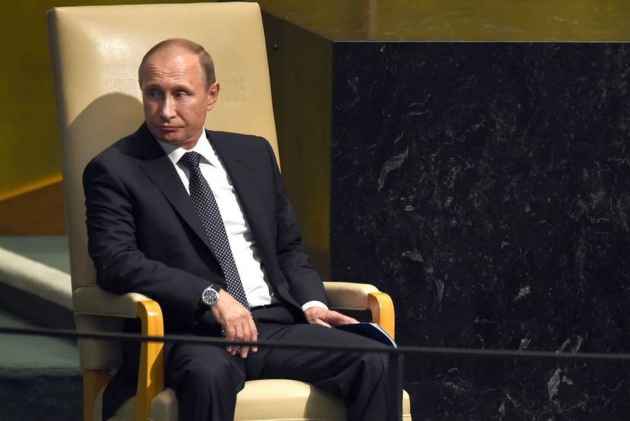 Russian President Vladamir Putin is one of those guys on the subway who spread their legs wide, encroaching on everyone else’s space, a manspreader, said Hillary Clinton in her memoir What Happened.

She said Barack Obama compared  Putin to a “bored kid  at the back of the classroom” who  has “got that kind of slouch”.

Read the extract from the book...

V for Vendetta (and Vladimir)

President Obama once compared Vladimir Putin to a “bored kid at the back of the classroom.” “He’s got that kind of slouch,” Obama said. When I sat with Putin in meetings, he looked more like one of those guys on the subway who imperiously spread their legs wide, encroaching on everyone else’s space, as if to say, “I take what I want,” and “I have so little respect for you that I’m going to act as if I’m lounging at home in my bathrobe.” They call it “manspreading.” That was Putin.

I’ve dealt with a lot of male leaders in my life, but Putin is in a class by himself. A former KGB spy with a taste for over-the-top macho theatrics and baroque violence (a public inquiry in the United Kingdom concluded that he probably approved the killing of one of his enemies in London by poisoning his tea with polonium-210, a rare radioactive isotope), Putin has emerged in the popular imagination as an arch-villain straight out of a James Bond movie. Yet he’s also perennially misunderstood and underestimated. George W. Bush famously said that after looking Putin in the eye, he found him “very straightforward and

trustworthy,” and was “able to get a sense of his soul.” My somewhat tongue-in-cheek response was: “He was a KGB agent—by definition, he doesn’t have a soul.” I don’t think Vladimir appreciated that one.

Our relationship has been sour for a long time. Putin doesn’t respect women and despises anyone who stands up to him, so I’m a double  problem. After I criticized one of his policies, he told the press, “It’s

better not to argue with women,” but went on to call me weak. “Maybe weakness is not the worst quality for a woman,” he joked. Hilarious. Putin still smolders over what he views as the humiliations of the

1990s, when Russia lost its old Soviet dominions, and the Clinton administration presided over NATO’s expansion. And things got a lot worse between us during my time as Secretary of State. When President Obama and I came into office in 2009, Putin and his prime minister, Dmitry Medvedev, had swapped jobs as a way of thwarting constitutionally required term limits. Surprisingly, Medvedev showed some independence and a willingness to pursue better relations with the United States. We knew Putin was still the real power in Russia but decided to see if we could find some areas of shared interest where progress might be possible. That was the origin of the much-maligned “reset.” It led to several concrete successes, including a new nuclear arms control treaty, new sanctions on Iran and North

Korea, a much-needed supply route to equip our troops in Afghanistan, increased trade and investment, and expanded counterterrorism cooperation. In the spring of 2011, President Medvedev agreed to abstain

on the UN Security Council resolution authorizing the use of force to protect civilians in Libya from the dictator Colonel Muammar Gaddafi, a decision that angered Putin.

President Obama and I agreed that seeking pragmatic cooperation with Russia on certain issues was not inconsistent with also standing up for our values and showing support for the democratic aspirations of the Russian people. I felt a responsibility to speak out against the Kremlin’s repression of human rights in Russia, especially the intimidation and murder of journalists and political opponents. In October 2009, I was in Moscow and did an interview with one of the last remaining independent radio stations in the country. I expressed support for human rights and civil society, and I said that I thought a lot of Russians wanted the thugs who attacked journalists brought to justice. I knew Putin wouldn’t be happy with me saying these things on his own turf, but I felt that if the United States accepted a gag order on these issues, that decision would reverberate, not just in Russia but also around the world.

The KGB taught Putin to be suspicious of everyone. Russia’s troubles in the 1990s and the “color revolutions” of the 2000s—the string of popular revolts that toppled authoritarian regimes in several former Soviet bloc countries—took him from suspicious to paranoid. He came to view popular dissent as an existential threat. When he heard me and other Western leaders voice support for civil society in Russia, he saw it as a plot to undermine him.

For Putin, a pivotal moment came in 2011. In September he announced he would run for President again. In December there were widespread reports of fraud in parliamentary elections, which sparked

domestic protests and international condemnation. At a conference in Lithuania focused on promoting democracy and human rights in Europe, I expressed America’s concerns. “The Russian people, like people everywhere, deserve the right to have their voices heard and their votes counted,” I said, “and that means they deserve fair, free, transparent elections and leaders who are accountable to them.” Tens of thousands of Russians took to the streets amid chants of “Putin is a thief,” an unprecedented popular challenge to his iron grip on the country. Putin, more paranoid than ever, thought it was a conspiracy orchestrated from Washington. He blamed me in particular, saying I “gave them a signal.”

Putin quashed the protests and once again became President, but he was now running scared and seething with anger. In the fall of 2011, Putin had published an essay promising to regain Russia’s regional and global influence. I read it as a plan to “re-Sovietize” the lost empire and said so publicly. Once back in office, Putin moved to put his vision into action.

He consolidated power and cracked down on any remaining domestic dissent. He also took a more combative tone toward the West and nursed his personal grudge against me. By the way, that’s not just how I saw it; grudge is also the word the U.S. government used in its official assessment.

In a series of memos, I warned President Obama that things were changing in Russia, and America would have to take a harder line with Putin. Our relationship was likely to get worse before it got better,

I told the President, and we needed to make it clear to Putin that aggressive actions would have consequences.