Polls Weren't About AFSPA But Who'll Save Valley From Hills. And Irom Sharmila Didn't Look Like Saviour

In India where elections are about money and power, Ibobi Singh nurtured his constituency. He provided jobs for almost every voter over there

More from Linda Chhakchhuak
View All

On March 11, one could almost hear hearts breaking across the globe as a legend crashed and was smashed at the just-ended Manipur hustings.

It was hard to digest for most that Irom Sharmila, considered almost a goddess due to her herculean feat of hunger striking for 16 years demanding end to the draconian Armed Forces Special Powers Act (AFSPA), got less than 100 votes.  One could see people going crazy trying to figure out the reasons.

“How could people do this to her after she had sacrificed 16 years of her youth for her people, fought so valiantly against the draconian AFSPA? ” was the general  refrain of these talks. Media hype and local drama had helped build a larger than life figure of her.

She cried a lot when the results were out yesterday. It hurt.  Because, though neither she herself, nor her supporters expected her to win, such a royal ditch was never expected.

But her supporters, who are there even after a huge chunk disappeared after she stopped her legendary fast on August 9, 2016, said her fight was more of a symbolic nature. Not real. She was an image of theory and a principle. But practical life is different. Elections in India are about money and power. She had neither.

She was not practical. After 16 years she had decided to step back into ordinary life. Just as the ugly hullaballoo over her stopping her fast was dying down, she announced her decision to continue her fight against AFSPA by going into politics about two months later. She set herself the most difficult task to fight and win against another icon (tainted no doubt) of Manipur politics, Okram Ibobi Singh, the undefeatable man who had held the post of chief minister for three terms  (now posied for a fourth). The announcement came in October, 2016 with only about 4 months to go before the polls.

“Ibobi Singh has nurtured his constituency. He provided jobs for almost every voter over there.  In his constituency he is a god. No one can touch him. His wife won previously. This time she vacated her seat for her son. He won by a thumping margin. Even his nephew won. He can put up a lamp post and it will win,” said a friend of Sharmila describing the deep rooted powers of the man she had stood against.

He on his part had never ever uttered a word against her but instead ‘humbly’ incorporated her agenda, that of lifting AFSPA into his party manifesto.

On the other hand, Sharmila had no money, no widespread support with just a straggly band of followers. She did not campaign much either. She had no experience at grassroots politics. Among the things she did after the announcement was doing a small tour of Delhi during which she had met the Delhi chief minister Arvind Kejriwal among other people.

Besides, the elections this time was not about AFSPA. In 16 years since those dark days of routine official killing sprees under AFSPA, things have changed in the state. She had started her fast in 2000 after about 10 youth were gunned down by State Forces in a series of so called encounters.

There has been a sea change in the past 16 years.

This polls was about who will safe-guard the valley against the pressure from the hills? With the hills in ferment shouting for homelands and ethnic districts, Ibobi’s creation of the 7 hill districts as an antidote to this is seen as a master stroke.

Sheer genius, for many across the board, Ibobi is a hero, considered the only one who can protect the territorial integrity of the state against the call of the Naga brothers in the hills to divide the state.  One cannot ignore the view that Ibobi has already infiltrated the Bharatya Janata Party (BJP), a crucial need for the valley people,  as the Central ruling party is seen to be hands in glove with the National Socialist Council of Nagaland Issac-Muivah (NSCN-IM)) with which it has an exclusive pact called the Framework Agreement signed in August 3, 2015.  The NSCN (IM)’s goal of creating a Nagalim State cannot be done without the dismemberment of Manipur.

Under this desperate situation, “No one was even remotely thinking about AFSPA,” is the general view.

And then, the last straw, she made mistakes or rather “decisions” which went against her image. Lots of them, say her supporters.

Some of her ardent followers had left her party, People’s Resurgence and Justice Alliance (PRJA), because they believed that she did not seem to be the one making her own decisions. What to say, when to say, her views, her future plans or even her political goals were suspected to be from extraneous sources.

“It was her boyfriend. He seemed to have almost complete control over her,” was one view.

She has had a fiancée, Desmond Coutinho, a non-resident Indian of Goan background since 2013.  He has been the source of many conflicts over the years after he appeared into the sensitive scenario as a ‘boyfriend’.  He has then openly accused Sharmila’s band of supporters of ‘using’ her for their personal gain and interests.  Coutinho laid a heavy handed claim to her. Significant is an image of a power of attorney purportedly giving him sole right to represent her posted in his FB page. He seemed to resent the supporters and her well wishers who had been fighting alongside her all the while to amplify her campaign in the national and international human rights networks, as well as those who are looking after her now. 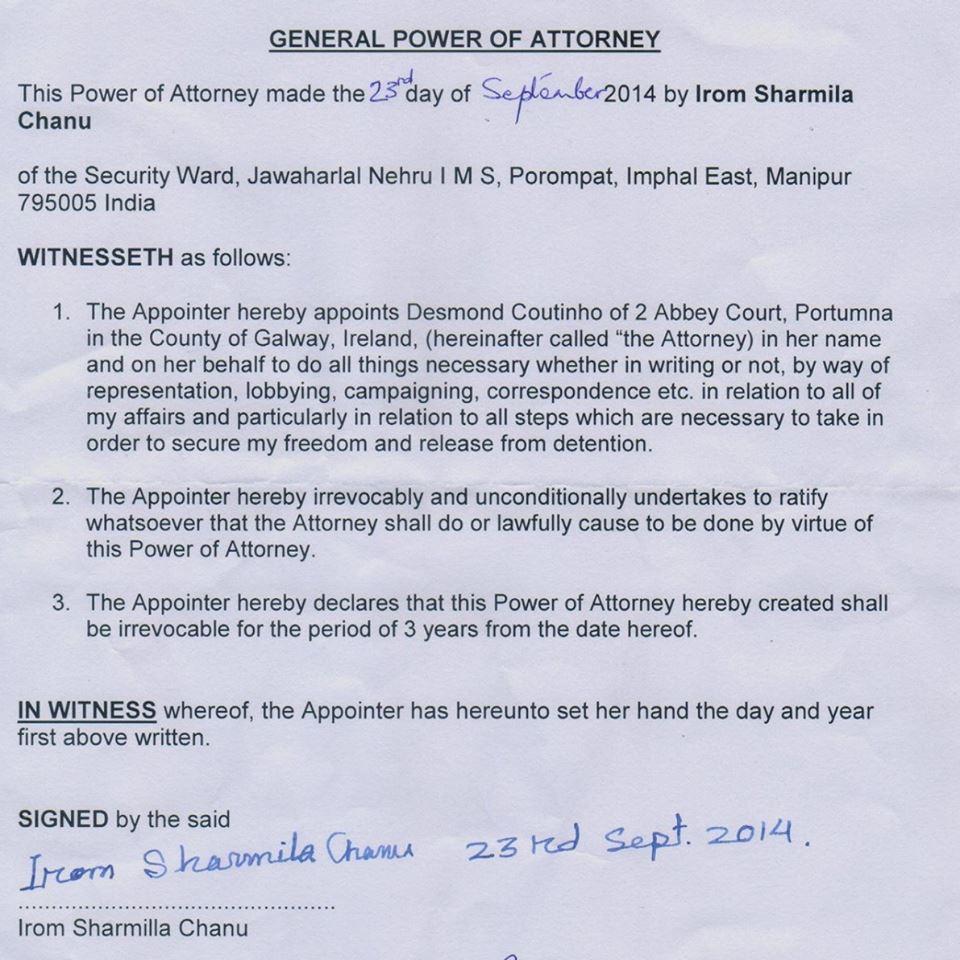 As serious as the electoral fight she had started was, it was Sharmila herself who would often puncture the gravity of the challenge by suddenly announcing that she would marry him and leave for wherever. This left her supporters fumbling for words and looking like fools.

The life of Sharmila is an open book and the people know every detail in it. People could see these inconsistencies and seem to have decided that she is not a serious candidate.

Some even suspect that the ‘inspiration’ to jump into politics and take on Ibobi came from that source with the sole motive of totally destroying her image and that of the people of Manipur. They point out that none had supported her plans to go into politics, but had fallen in line with her desire. Those followers of hers who followed her to the ‘gallows’ sacrificing all their earthly wealth were her die-hard supporters who would follow her to hell if required.

It is indeed an agonizing situation. The people want to embrace her, their hero, their icon warrior who led the fight for justice and an end to the State’s right to kill dissenters. They want to comfort her. And fight alongside her.

But, “there is something problematic here. She is destroying us because of this inconsistency.  And she and all that she stands for is being destroyed by that man,” said one ardent supporter.

The PRJA has called a meeting today to review the elections. It is hoped that they can strategize and plan for a long haul as things are only set to get worse in the state. Her 16 years of sacrifice for Human Rights cannot be allowed to fall into oblivion at a time when true human rights defenders are the need of the hour.  If there’s one thing that this election did for Sharmila, it is that it broke all illusions about her. As she said, “I’m not an iron lady. I’m only human.” That’s a good place to begin afresh from.

(Linda Chhakchhuak is an independent journalist)