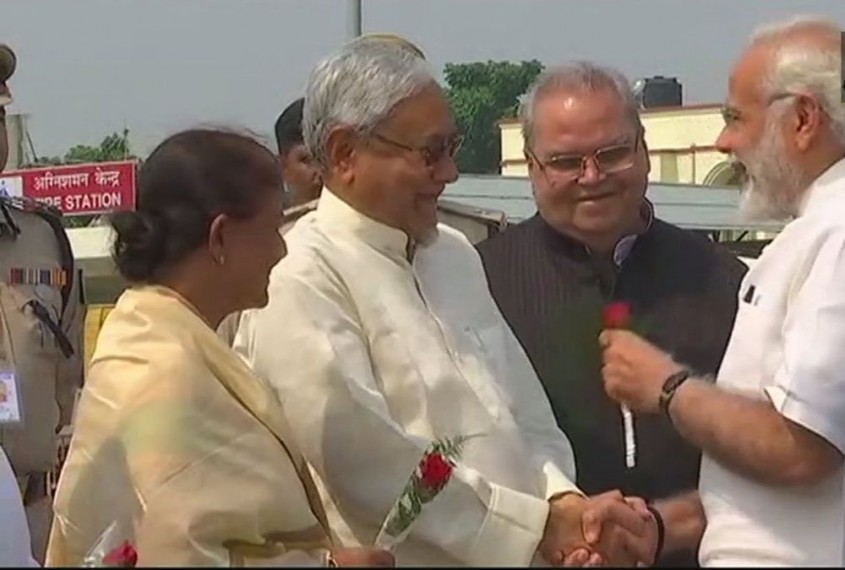 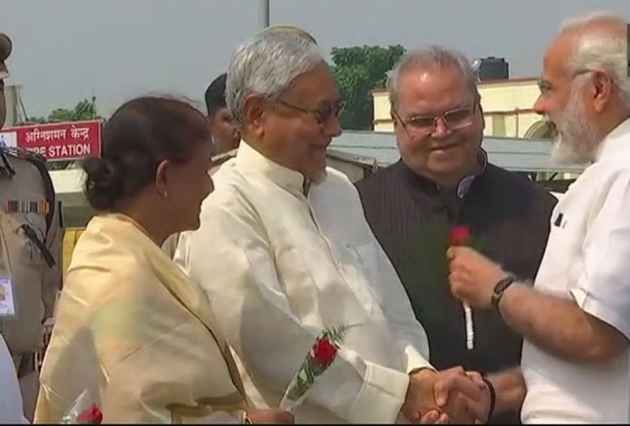 Prime Minister Narendra Modi today shared the stage with Bihar Chief Minister Nitish Kumar for the first time after the the JD(U) returned to the NDA fold.

Modi attended the centenary celebrations of the Patna University (PU) here along with Kumar.

"It is a day of great honour that Prime Minister Narendra Modi is present for Patna University's centenary celebrations," Kumar said addressing the gathering.

Earlier, the Prime Minister was welcomed by Bihar Governor Satya Pal Malik and the chief minister among others at the Patna airport from where he drove straight to the Patna Science College campus.

He will also launch development projects worth over Rs 3,700 crore during his visit.

This is the prime minister's first full-fledged official tour to the state since the BJP became a part of the ruling coalition in Bihar in July this year after Kumar-led JD(U) snapped its alliance with Lalu Prasad's RJD and the Congress.

In August, Modi along with Chief Minister Nitish Kumar had made an aerial survey of the flood-hit districts of Bihar.

The prime minister had promised a "package" of Rs 1.25 lakh crore in 2015 for the state during the campaign for the assembly elections in which the BJP and the JD(U) were pitted against each other.

The two parties remained partners in Bihar for 17 years but the JD(U) severed ties in mid-2013 over elevation of Modi as BJP's Prime Ministerial candidate.

Union Minister Ravi Shankar Prasad, who was among the dignitaries at the PU function today, told reporters, "I am not here as a minister but as a proud alumnus of this glorious university. And I am proud that the Prime Minister of the country is attending a function at my alma mater".

After attending the Patna University function, the prime minister will fly to Mokama, which is in Patna district about 100 km from the capital city. Modi will launch a number of development projects there.

The state BJP president has been hinting that a bonanza was on the cards, terming the prime minister's visit as a "Diwali gift" to the people of Bihar in general and Mokama in particular.

At Mokama, Modi will lay the foundation stone of four Rs national highways projects worth 3,031 crore.

Union road transport minister Nitin Gadkari, who also holds the portfolio of water resources, will accompany the prime minister for the ceremony.